Laboratory diagnosis of gas gangrene and other soft tissue diseases is carried out to: a) Confirm the diagnosis, b) Identify the clostridial species, and c) Differentiate gas gangrene from anaerobic streptococcal myositis.

Laboratory diagnosis of gas gangrene and other soft tissue diseases is carried out to:

b)       Identify the clostridial species, and

Treatment has to be started immediately in suspected as well as clinically diagnosed cases without waiting for the laboratory results.

The specimens for gas gangrene include the following:

a)        Pus and other exudates from deeper part of the wound and from the sides where infection appears to be most acute; the specimen is collected by a capillary tube and swab.

b)       Smears from the muscles at the edge of the affected site, from the pus and/or exudate from deeper parts of the wound, and from the necrotic tissue.

The specimens for investigation of food poisoning include feces and remnants of food.

Gram staining of smears is a useful method in diagnosis of C. perfringens infection. It provides information regarding thespecies of clostridia that causes the infection and also indi-cates relative number of the clostridial species found in clinical specimens:

a)        Demonstration of a large number of Gram-positive bacilli without spores, and absence of leukocytes in stained smears of clinical specimens, is suggestive of C. perfringens infection.

b)       Large-sized Gram-positive bacilli with the presence of oval and subterminal spores suggest Clostridium novyi.

A set of four tubes of RCM media are inoculated and heated at 100°C for 5, 10, 15, and 20 minutes and incubated at 37°C for 24–48 hours. Subsequently, subcultures are made on blood agar to detect and differentiate various clostridial species.

In cases of septicemia, blood culture is often positive for C. perfringens and C. septicum.

The identifying features of C. perfringens colonies are presented.

Nagler reaction: Nagler reaction is a useful test for rapiddetection of C. perfringens in clinical specimens (Fig. 29-4, Color Photo 28). This reaction demonstrates biological property of the enzyme lecithinase—to produce opalescence in the serum and in the egg yolk media. This reaction is specifically neutral-ized by the use of specific antitoxin. 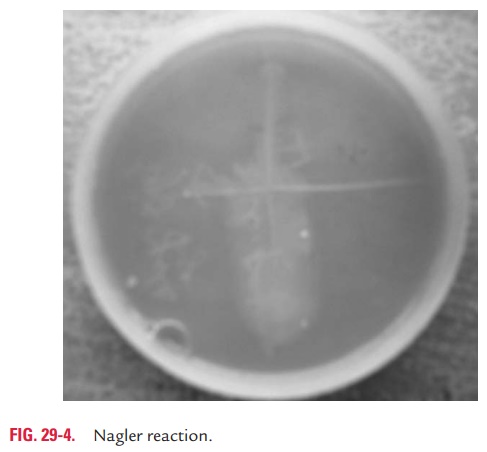 The test is performed by culturing C. perfringens on a medium containing 6% agar, 5% Fildes peptic digest of sheep blood, and 20% human serum and antibiotic neomycin sulfate. One-half of the medium is inoculated with specific antitoxin raised against C. perfringens, while the other half of the medium does not contain any antitoxin. After 48 hours of incubation, the colonies of C. perfringens on part of the agar without antitoxin do not show any opacity. This is due to the neutralization of enzymatic activity of the enzyme lecithinase. The aerobic spore bearers and coliforms are inhibited by neomycin sulfate in the medium, which makes the medium more selective for perfringens.

C. novyi, C. bifermentans, some aerobic spore bearers, andsome Vibrio species produce the enzyme lecithinase; there-fore, they also produce opalescence in the egg yolk medium. However, reaction is not neutralized by C. perfringens antitoxin, but rather by the antitoxin of C. bifermentans, which produces a serologically related lecithinase.

Laboratory diagnosis of food poisoning is made by demonstration of more than 106 bacteria per gram of feces, collected within 24 hours of the onset of the condition.

An enzyme immunoassay to detect enterotoxin in feces has recently been developed for diagnosis of food poisoning.