Clostridium perfringens: Properties of the Bacteria

C. perfringens is the most important Clostridium species causinggas gangrene, a severe life-threatening disease. The bacteria also cause necrotic enteritis and food poisoning.

C. perfringens is the most important Clostridium species causinggas gangrene, a severe life-threatening disease. The bacteria also cause necrotic enteritis and food poisoning.

·           C. perfringens is a large, rectangular, Gram-positive bacillusmeasuring 4–6 m in length; it is a straight bacillus with parallel sides and round and truncated ends.

·           The bacilli are nonmotile, however, the bacteria multiply rapidly, giving a characteristic spreading colony appearance on the media, resembling the growth of motile clostridia.

·           They possess central or subterminal spores. The spores, however, are rarely seen either in clinical specimens from lesions or in culture media.

C. perfringens is an anaerobic but aerotolerant bacterium. The bac-teria can grow under microaerophilic conditions and do not die on exposure to air. They grow at a temperature range of 20–44°C (optimum temperature 37°C) and a pH range of 5.5–8.0. 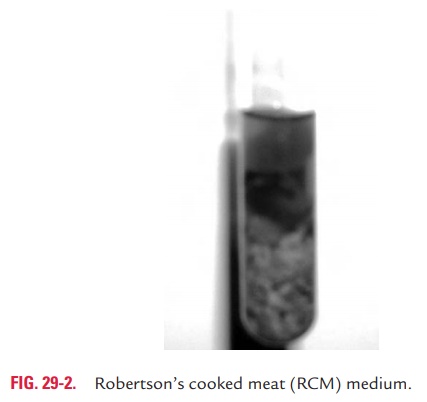 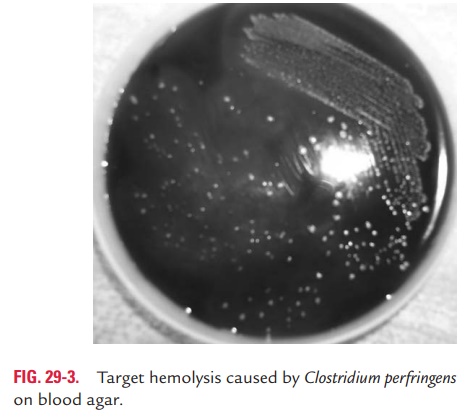 ·           C. perfringens is metabolically active. The bacteria fermentglucose, lactose, sucrose, and maltose with the production of acid and gas.

Susceptibility to physical and chemical agents: C. perfringensspores are killed within 5 minutes by boiling, but spores of cer-tain strains (food poisoning strain of type A, certain strains of type C) are killed by boiling for a longer period of 1–3 hours. The spores are also killed by autoclaving at 121°C for 15 minutes. C. perfringens spores are resistant to commonly used antisepticsand disinfectants. The bacilli are sensitive to metronidazole and penicillins.

Typing: On the basis of four major toxins (alpha-, beta-,epsilon-, and iota-toxin) produced by C. perfringens, strains of C. perfringensare classified into five types (A, B, C, D, and E).Typing of strains is carried out by in vivo test in animals. This is carried out by neutralization of the toxins with specific antitox-ins via intravenous or percutaneous injections in mice.