The specimens include excised bits of tissue from the necrotic depths of wounds. Swabs from the wounds are not good specimens.

Gram staining of smears for C. tetani is useful but frequently unsuccessful and also unreliable.

The specimens are inoculated on a blood agar and incubated anaerobically for 24–48 hours. C. tetani produces swarming growth, which spreads throughout the plate. 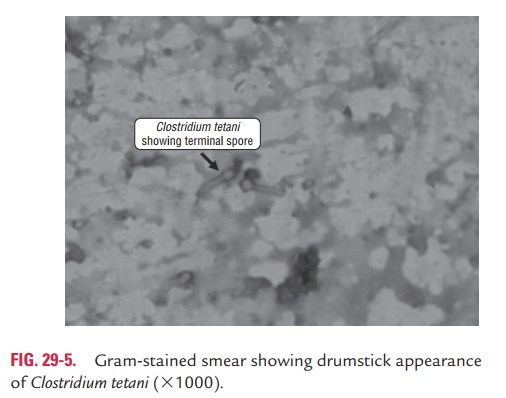 The specimens are also inoculated to a set of three tubes of RCM media, one of which is heated at 80°C for 15 minutes, the second for 5 min-utes, and third is left unheated and are incubated at 37°C for 24–48 hours. Subsequently, subculture is made daily on blood agar for up to 4 days. From the swarming edges of the colo-nies on blood agar, C. tetani is isolated in pure culture. Culture is positive in only 30% of cases of tetanus because tetanus is caused only by a few organisms, and many organisms are killed when exposed to air during processing of specimens.

The identifying features of C. tetani are distinguished by their morphology, cultural, and toxigenic characteristics.

Strains of C. tetani are tested for production of toxin by follow-ing tests:

In vitro neutralization test on blood agar:The test is performedon a blood agar containing 4% agar. High percentage of agar is used to inhibit swarming by C. tetani. One-half of the medium is inoculated with tetanus antitoxin (1500 units per mL), while the other half of the medium does not contain any antitoxin. Strains of C. tetani are stab-inoculated on each half of the plate and incubated anaerobically for 48 hours. The colonies of C. tetani show hemolysis on part of the blood agar without anyantitoxin, but do not show any hemolysis on part of the agar with antitoxins. This is due to inhibition of hemolytic activity of the toxin by antitoxin present in the agar. The test is useful to demonstrate identification of the colony as C. tetani, but is not a reliable test.

In vivo neutralization test in mice:In this test, a 0.2 mL of a 2–4days old cooked meat culture of C. tetani is inoculated into the root of the tail of two mice each, one of which is protected with 1000 units of tetanus antitioxin 1 hour before the test (control animal). The other mouse is not protected with any antitoxin (test animal). Symptoms of ascending tetanus due to tetanospasmin produced by C. tetanidevelop in test animals 12–24 hours after inoculation of the bacteria. The symptoms begin in mouse with stiffness in the tail, which proceed rapidly to the leg on inoculated side, the opposite leg, trunk, and forelimbs, in that order. The animal usually dies within 48 hours. No symptoms appear in the inoculated control animal. Toxigenicity testing in mouse is a reliable method of identification of the colony as C. tetani.

Serological tests are not used because neither antibodies to teta-nus toxin nor the tetanus toxin are detectable in serum of patients.

The spatula test: This is most useful and a simple bedsidediagnostic test for tetanus. This test is based on touching the oropharynx with a spatula or tongue blade. This touch typically elicits a gag reflex and the patient tries to expel the spatula (negative test). The patients develop a reflex spasm of the masseters and bite the spatula if tetanus is present (positive test). The test is 100% specific and 94% sensitive.