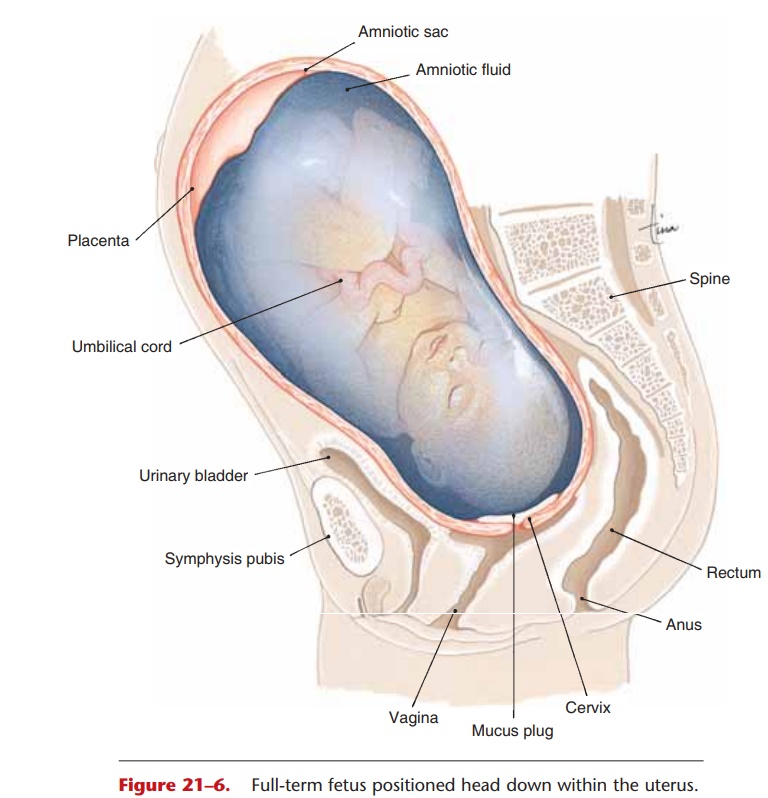 Parturition is the rather formal term for birth, and labor is the sequence of events that occur during birth.

Parturition is the rather formal term for birth, and labor is the sequence of events that occur during birth. The average gestation period is 40 weeks (280 days), with a range of 37 to 42 weeks.

Toward the end of gestation, the placental secretion of progesterone decreases while the estrogen level remains high, and the myometrium begins to contract weakly at irregular intervals. At this time the fetus is often oriented head down within the uterus (Fig. 21–6). Labor itself may be divided into three stages: 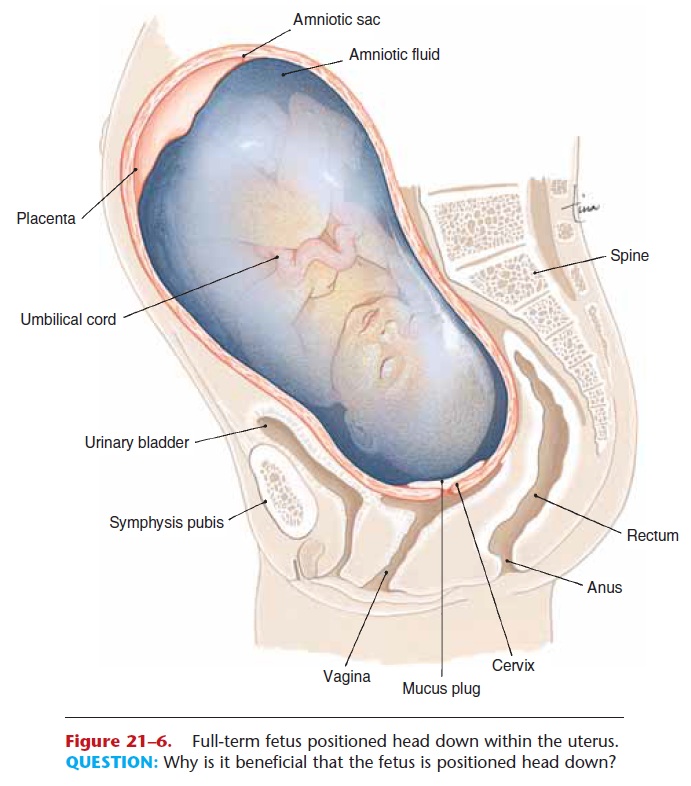 First stage—dilation of the cervix. As the uterus con-tracts, the amniotic sac is forced into the cervix, which dilates (widens) the cervical opening. At the end of this stage, the amniotic sac breaks (rupture of the “bag of waters”) and the fluid leaves through the vagina, which may now be called the birth canal. This stage lasts an average of 8 to 12 hours but may vary considerably.

Second stage—delivery of the infant. More power-ful contractions of the uterus are brought about by oxytocin released by the posterior pituitary gland and perhaps by the placenta itself. This stage may be prolonged by several factors. If the fetus is positioned other than head down, delivery may be difficult.

This is called a breech birth and may necessitate a cesarean section (C-section), which is delivery of the fetus through a surgical incision in the abdominal wall and uterus. For some women, the central opening in the pelvic bone may be too small to permit a vaginal delivery. Fetal distress, as determined by fetal monitoring of heartbeat for example, may also require a cesarean section.

Third stage—delivery of the placenta (afterbirth). Continued contractions of the uterus expel the pla-centa and membranes, usually within 10 minutes after delivery of the infant. There is some bleeding at this time, but the uterus rapidly decreases in size, and the contractions compress the endometrium to close the ruptured blood vessels at the former site of the placenta. This is important to prevent severe maternal hemorrhage.