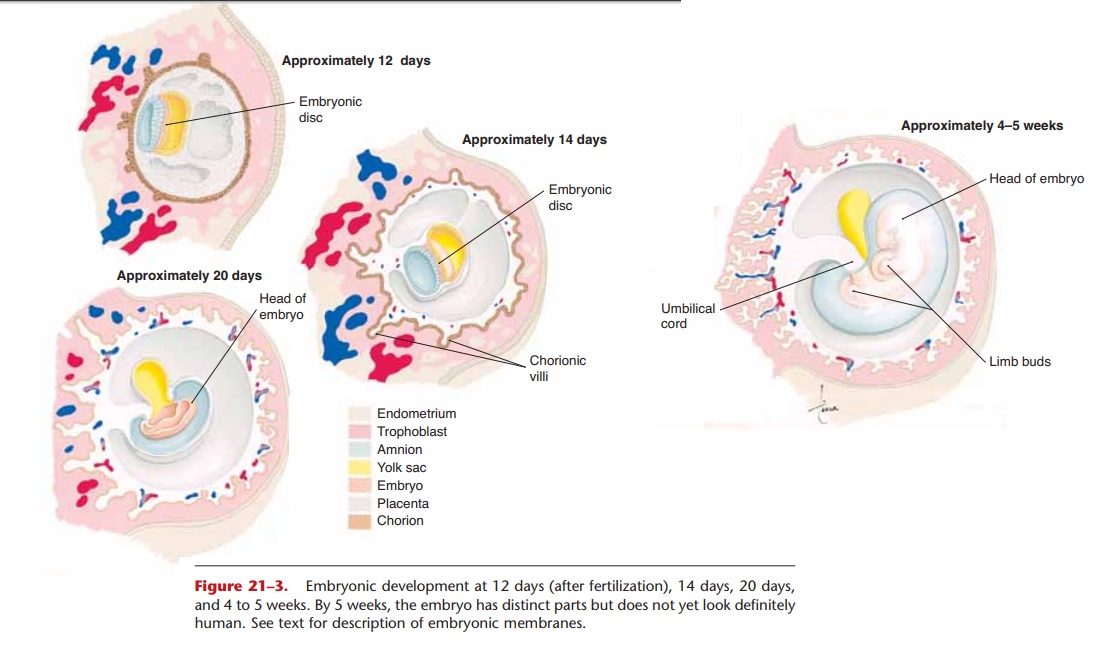 An embryo is the developing human individual from the time of implantation until the eighth week of gestation.

An embryo is the developing human individual from the time of implantation until the eighth week of gestation. Several stages of early embryonic development are shown in Fig. 21–3. At approximately 12 days, the embryonic disc (the potential person) is simply a plate of cells within the blastocyst. As cells keep divid-ing, the plate of cells begins to fold. At 14 days twin-ning is believed to be no longer possible. 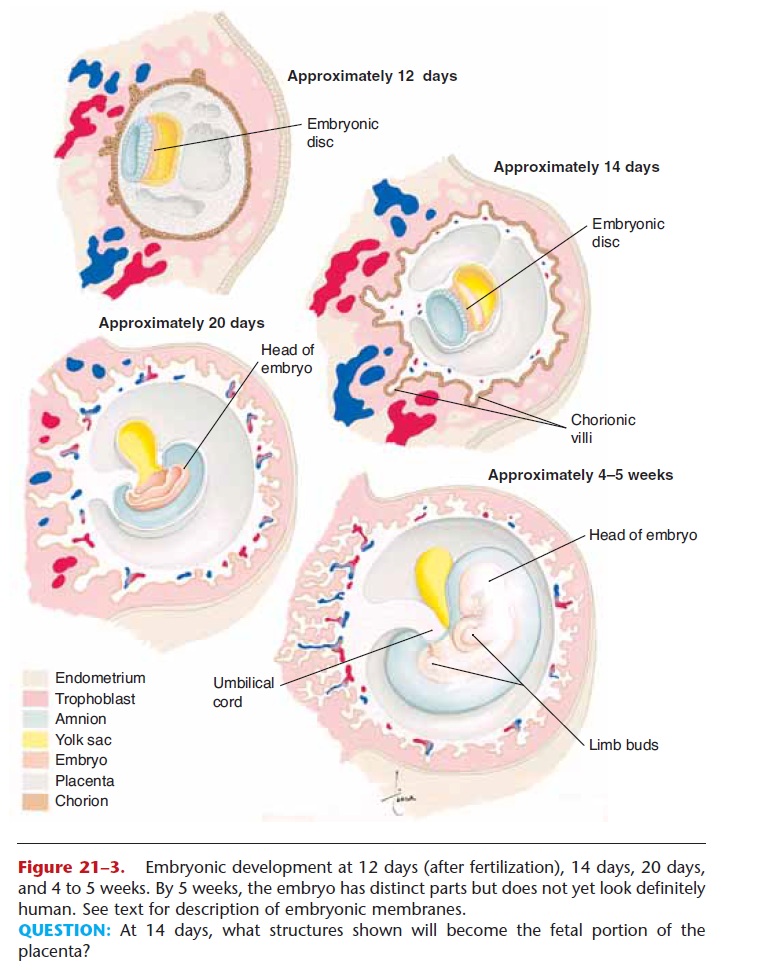 Figure 21–3. Embryonic development at 12 days (after fertilization), 14 days, 20 days, and 4 to 5 weeks. By 5 weeks, the embryo has distinct parts but does not yet look definitely human. See text for description of embryonic membranes.

QUESTION: At 14 days, what structures shown will become the fetal portion of the placenta?

Very soon thereafter, three primary layers, or germ layers, begin to develop: the ectoderm, mesoderm, and endoderm. This is a major step in the specializa-tion of the embryo cells, because different sets of genes are switched off for each of the three layers, while the genes appropriate for the layer remain switched on. Each cell is now committed to a particu-lar layer and can no longer “go back,” that is, become a cell of either of the other two layers.

Each primary layer develops further; its cells become more specialized as more and more genes in each cell are switched off. With the active genes, those that remain switched on, the cells in each layer are thereby committed to develop into specific organs or parts of organs. Ecto means “outer”; the epidermis is derived from ectoderm, and in some of these cells the gene for producing keratin is active. Meso means “mid-dle”; the skeletal muscles develop from mesoderm, and in these cells the genes for producing myosin and actin are active. Endo means “inner”; the stomach lin-ing is derived from endoderm, and in these cells, the gene for producing pepsinogen is active. Table 21–1 lists some other structures derived from each of the primary germ layers. 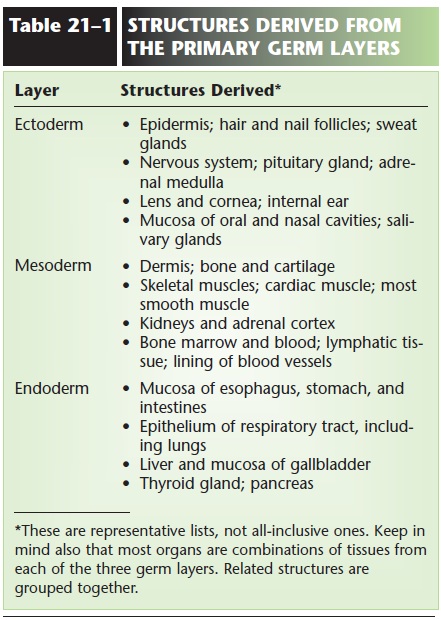 At 20 days, the embryonic membranes can be clearly distinguished from the embryo itself. The yolk sac does not contain nutrient yolk, as it does for bird and reptile embryos. It is, however, the site for the for-mation of the first blood cells and the cells that will become spermatogonia or oogonia. As the embryo grows, the yolk sac membrane is incorporated into the umbilical cord.

The amnion is a thin membrane that eventually surrounds the embryo and contains amniotic fluid. This fluid provides a cushion for the fetus against mechanical injury as the mother moves. When the fetal kidneys become functional, they excrete urine into the amniotic fluid. Also in this fluid are cells that have sloughed off the fetus; this is clinically important in the procedure called amniocentesis. The rupture of the amnion (some-times called the “bag of waters”) is usually an indica-tion that labor has begun.

The chorion is the name given to the trophoblast as it develops further. Once the embryo has become implanted in the uterus, small projections called chorionic villi begin to grow into the endometrium. These will contain the fetal blood vessels that become the fetal portion of the placenta. 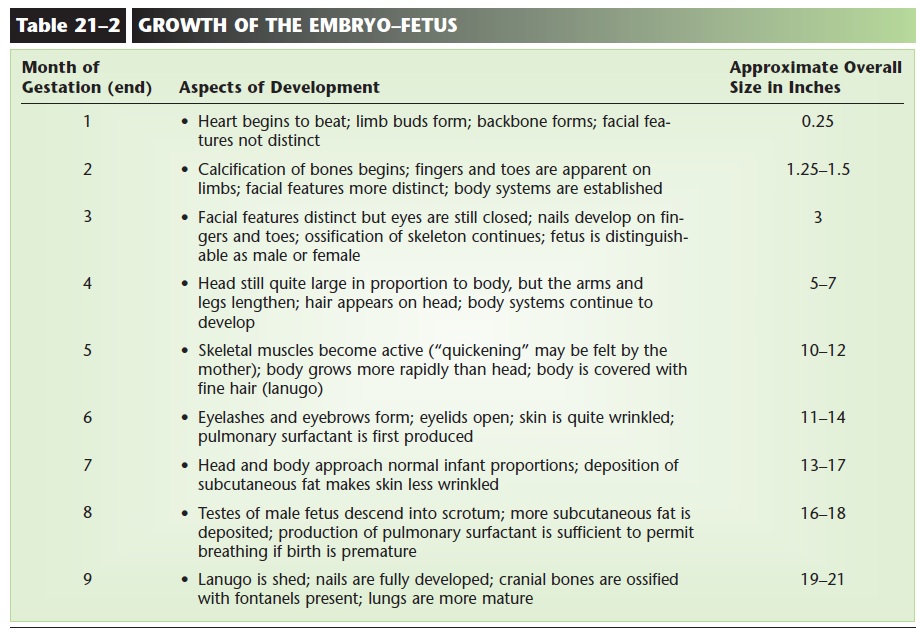 At about 4 to 5 weeks of development, the embryo shows definite form. The head is apparent, the heart is beating, and limb buds are visible. The period of embryonic growth continues until the 8th week. At this time, all of the organ systems have been estab-lished. They will continue to grow and mature until the end of gestation. The period of fetal growth extends from the 9th through the 40th week. Table 21–2 lists some of the major aspects of development in the growth of the embryo-fetus. The fetus at 16 weeks is depicted in Fig. 21–4. Maternal changes during pregnancy are summarized in Table 21–3. 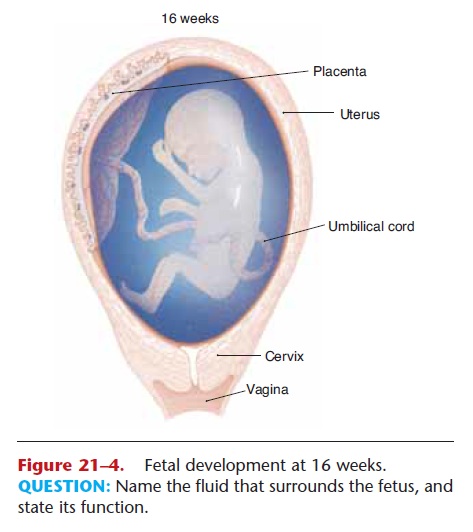 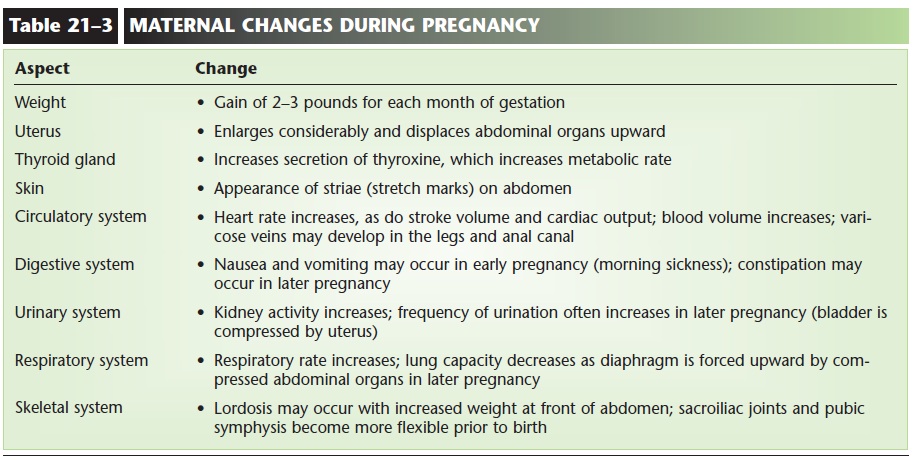