Partial agonism and the two-state model of receptor activation

The efficacy will obviously vary for drugs that act on the same physiological parameter by different routes;

Partial agonism and the two-state model of receptor activation

The efficacy will obviously vary for drugs that act on the same physiological parameter by different routes; e.g., morphine is a stronger painkiller than aspirin is. Howev-er, profound differences may even be observed with sub-stances that act on the very same site of the very same tar-get molecule. Figure 3.11 shows an example. The recep-tor in question is a serotonin receptor (subtype 1A) which occurs in the brain and is the target of some psychoactive drugs. Like the adrenergic receptors mentioned above, it is a G protein-coupled receptor. Receptor activation will trig-ger exchange of GDP for GTP in the cognate G proteins. It can therefore be measured by way of incorporation of GTP-γ35S, which is both radioactive and resistant to the in-trinsic GTP'ase activity of the G protein. You can see that the effects of the different agonists applied not only arise at different concentrations but also level off at different max-ima, some of them well below the reference value (100%). 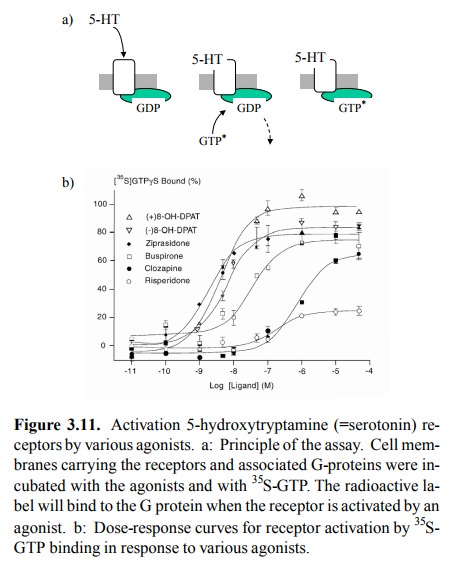 Agonists that show sub-maximal activation of a receptor, even at saturating concentrations, are called `partial ago-nists'. How can an agonist be `partial'?

A plausible explanation can be given if we consider the al-losteric nature of the `typical' receptor protein and its interaction with the ligand7. An allosteric protein has two con-formational states that are in equilibrium (Figure 3.12). With most receptors, the inactive state will be more preva-lent in the absence of agonists. However, an agonist will exclusively bind to and therefore favour the active confor mation. If the concentration of agonist is sufficiently high, the entire receptor population will be arrested in the ac-tive state. 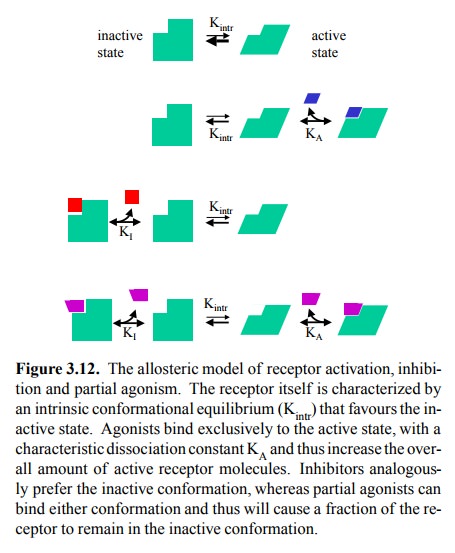 Analogously, an antagonist will preferentially bind the in-active conformation and therefore, at saturating concentra-tions, convert the entire receptor population to the inactive state. A partial agonist will have finite affinity for both con-formational states of the receptor, although it will be higher for the active conformation, so as to overcome the intrinsic preference of the inactive state (Kintr in Figure 3.12) and therefore bring about any appreciable receptor activation at all. Differences in the maximum effect (or efficacy) be-tween different partial agonists then simply correspond to different ratios of KA/KI, as defined in Figure 3.12.

As you can see in Figure 3.12 (bottom row), the receptor assumes four distinct states:

The active fraction of the receptor comprises the free and the ligand-associated active forms:

The expression that that quantitatively describes the active fraction as a function of the ligand concentrationcan quite easily be derived using the equilibrium equations, together with the two equations above: 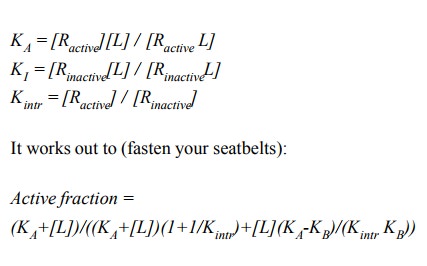 I will post an Excel spreadsheet on the course website that will allow you to play a bit with the parameters and see how they affect the resulting curve.