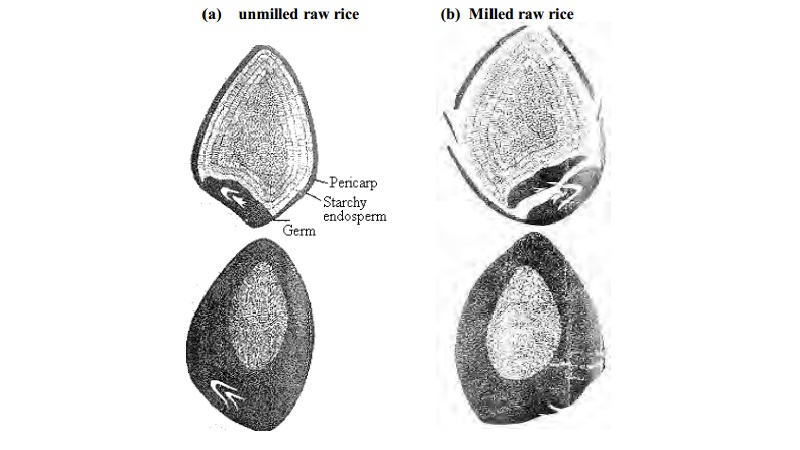 Parboiling is a process of soaking paddy in water at 65° - 70° C for 3 - 4 hours. The water is drained and the soaked paddy is steamed in the same vessel for 5 to 10 minutes. The paddy is dried in the sun or mechanically dried.

Parboiling is a process of soaking paddy in water at 65 o - 70 o C for 3 - 4 hours. The water is drained and the soaked paddy is steamed in the same vessel for 5 to 10 minutes. The paddy is dried in the sun or mechanically dried.

1.    Dehusking of parboiled rice is easy.

3.     Part of the scutellum and germ which are rich in B - Vitamins get fixed to the grain and hence loss of B - Vitamins are less. The retention of thiamine, riboflavin, niacin and folic acid in parboiled rice is greater than that of polished or hand pounded rice.

5.     It swells more when cooked to desired softness.

Milling is the process, which removes the coarse outer layer of bran and germ. Paddy is milled by hand pounding or mechanical rice millers.

The process of milling involves the following steps.

Rice is passed through two stone or rubber discs rotating at different speeds and by shearing action on the grain, the hull is pulled away. The whole kernel from which the hulls have been removed is known as brown rice.

This is then milled in a machine called pearler to remove coarse outer layers of bran and germ by a process of rubbing, resulting in unpolished milled rice. Some amount of breakage of rice occurs in this milling.

Unpolished rice is liable to develop rancidity and so it is polished in a brush machine which removes the aleurone layer and yields 'polished rice'.

Sometimes the polished rice is further treated in a device known as trumbol to give a coating of sugar and talc to produce a brighter shine on the grains.

The percentage loss of different nutrients during milling are

The degree of milling determines the amount of nutrients removed.

Losses during milling can be compensated by the following processes.

By under-milling or unpolishing rice the loss of nutrients can be reduced.

A second method is that of increasing vitamin retention by processing the rough rice prior to milling. This is done by parboiling which is commercially known as converted rice.

Another means of remedying the losses occurring in the milling of rice is the artificial enrichment of the grain.

A premix has been developed in which the rice is wetted with a solution of thiamin and niacin, then dried. A second coating of iron pyro phosphate is distributed on the rice.

The rice premix is highly resistant to washing, cooking and storage losses.

1.     Unmilled raw rice - Germ and pericarp are intact in raw rice, Vitamin B1 and other vitamins are concentrated mainly in the germ and pericarp. When these are removed by milling, the grain has lost most of its vitamins.

3.     Unmilled parboiled rice- The vitamin has diffused through the endosperm

4.     Milled parboiled rice : Although germ and pericarp have been removed, the grains still contains most of the vitamins