Panic disorder is composed of discrete episodes of panic attacks, that is, 15 to 30 minutes of rapid, intense, escalating anxiety in which the person experiences great emo-tional fear as well as physiologic discomfort.

Panic disorder is composed of discrete episodes of panic attacks, that is, 15 to 30 minutes of rapid, intense, escalat-ing anxiety in which the person experiences great emo-tional fear as well as physiologic discomfort. During a panic attack, the person has overwhelmingly intense anxi-ety and displays four or more of the following symptoms: palpitations, sweating, tremors, shortness of breath, sense of suffocation, chest pain, nausea, abdominal distress, diz-ziness, paresthesias, chills, or hot flashes. 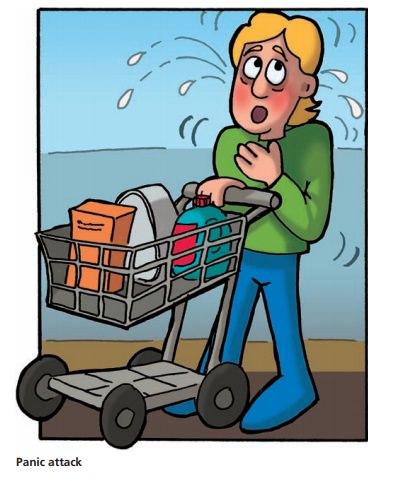 Panic disorder is diagnosed when the person has recurrent, unexpected panic attacks followed by at least 1 month of persistent concern or worry about future attacks or their meaning or a significant behavioral change related to them. Slightly more than 75% of people with panic disorder have spontaneous initial attacks with no environmental trigger. Half of those with panic disorder have accompanying agoraphobia. Panic disorder is more common in people who have not graduated from college and are not married. The risk increases by 18% in people with depression (Merikangas, 2005).

The onset of panic disorder peaks in late adolescence and the mid-30s. Although panic anxiety might be normal in someone experiencing a life-threatening situation, a person with panic disorder experiences these emotional and physi-ologic responses without this stimulus. The memory of the panic attack coupled with the fear of having more can lead to avoidance behavior. In some cases, the person becomes homebound or stays in a limited area near home such as on the block or within town limits. This behavior is known as agoraphobia (“fear of the marketplace” or fear of being outside). Some people with agoraphobia fear stepping out-side the front door because a panic attack may occur as soon as they leave the house. Others can leave the house but feel safe from the anticipatory fear of having a panic attack only within a limited area. Agoraphobia also can occur alone without panic attacks.

The behavior patterns of people with agoraphobia clearly demonstrate the concepts of primary and second-ary gain associated with many anxiety disorders. Primary gain is the relief of anxiety achieved by performing the specific anxiety-driven behavior such as staying in the house to avoid the anxiety of leaving a safe place. Second-ary gain is the attention received from others as a result of these behaviors. For instance, the person with agorapho-bia may receive attention and caring concern from family members, who also assume all the responsibilities of family life outside the home (e.g., work and shopping). Essentially, these compassionate significant others become enablers of the self-imprisonment of the person with agoraphobia.

Panic disorder is treated with cognitive–behavioral tech-niques, deep breathing and relaxation, and medications such as benzodiazepines, SSRI antidepressants, tricyclic antidepressants, and antihypertensives such as clonidine (Catapres) and propranolol (Inderal).