Obsessions are recurrent, persistent, intrusive, and unwanted thoughts, images, or impulses that cause marked anxiety and interfere with interpersonal, social, or occupational function.

Obsessions are recurrent, persistent, intrusive, and unwanted thoughts, images, or impulses that cause marked anxiety and interfere with interpersonal, social, or occupational function. The person knows these thoughts are excessive or unreasonable but believes he or she has no control over them. Compulsions are ritualis-tic or repetitive behaviors or mental acts that a person carries out continuously in an attempt to neutralize anxi-ety. Usually, the theme of the ritual is associated with that of the obsession, such as repetitive hand-washing when someone is obsessed with contamination or repeated prayers or confession for someone obsessed with blas-phemous thoughts. Common compulsions include the following:

·    Washing and scrubbing until the skin is raw

·    Touching, rubbing, or tapping (feeling the texture of each material in a clothing store; touching people, doors, walls, or oneself)

·    Hoarding items (for fear of throwing away something important)

·    Ordering (arranging and rearranging furniture or items on a desk or shelf into perfect order; vacuuming the rug pile in one direction)

·    Exhibiting rigid performance (getting dressed in an un-varying pattern)

·    Having aggressive urges (for instance, to throw one’s child against a wall).

OCD is diagnosed only when these thoughts, images, and impulses consume the person or he or she is com-pelled to act out the behaviors to a point at which they interfere with personal, social, and occupational func-tion. Examples include a man who can no longer work because he spends most of his day aligning and realign-ing all items in his apartment or a woman who feels com-pelled to wash her hands after touching any object or person.

OCD can be manifested through many behaviors, all of which are repetitive, meaningless, and difficult to con-quer. The person understands that these rituals are unusual and unreasonable but feels forced to perform them to alleviate anxiety or to prevent terrible thoughts. Obsessions and compulsions are a source of distress and shame to the person, who may go to great lengths to keep them secret.

OCD can start in childhood, especially in males. In females, it more commonly begins in the 20s. Overall, distribution between the sexes is equal. Onset is usually gradual, although there have been cases of acute onset with periods of waxing and waning symptoms. Exacer-bation of symptoms may be related to stress. Eighty per-cent of those treated with behavior therapy and medica-tion report success in managing obsessions and compulsions, whereas 15% show progressive deteriora-tion in occupational and social functioning (APA, 2000).

Like for other anxiety disorders, optimal treatment for OCD combines medication and behavior therapy. Table 13.3 lists drugs used to treat OCD. Behavior therapy specifically includes exposure and response prevention: Exposure involves assisting the client to deliberately con-front the situations and stimuli that he or she usually avoids. Response prevention focuses on delaying or avoid-ing performance of rituals. The person learns to tolerate the anxiety and to recognize that it will recede without the disastrous imagined consequences. Other techniques dis-cussed previously, such as deep breathing and relaxation, also can assist the person to tolerate and eventually man-age the anxiety (Bandelow, 2008). 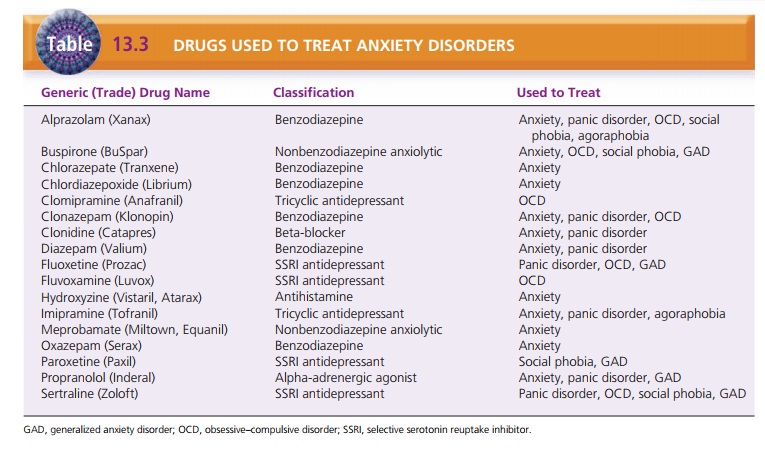