Protocol-independent multicast, or PIM, was developed in response to the scaling problems of earlier multicast routing protocols.

Protocol-independent multicast, or PIM, was developed in response to the scaling problems of earlier multicast routing protocols. In particular, it was recognized that the existing protocols did not scale well in environments where a relatively small proportion of routers want to receive traffic for a certain group.

For example, broadcasting traffic to all routers until they explicitly ask to be removed from the distribution is not a good design choice if most routers don’t want to receive the traffic in the

This situation is sufficiently common that PIM divides the problem space into sparse mode and dense mode, where sparse and dense refer to the proportion of routers that will want the multicast. PIM dense mode (PIM-DM) uses a flood-and-prune algorithm like DVMRP, and suffers from the same scalability problem.

The contrast to DVMRP’s approach of creating a broadcast tree first and then pruning the uninterested routers. The question that arises is where to send those Join messages because, after all, any host (and any number of hosts) could send to the multicast group. To address this, PIM-SM assigns to each group a special router known as the rendezvous point (RP).

In general, a number of routers in a domain are configured to be candidate RPs, and PIM-SM defines a set of procedures by which all the routers in a domain can agree on the router to use as the RP for a given group. These procedures are rather complex, as they must deal with a wide variety of scenarios, such as the failure of a candidate RP and the partitioning of a domain into two separate networks due to a number of link or node failures. All routers in a domain know the uncast IP address of the RP for a given group. A multicast forwarding tree is built as a result of routers sending Join messages to the RP. PIM-SM allows two types of tree to be constructed: a shared tree, which may be used by all senders, and a source-specific tree, which may be used only by a specific sending host.

The normal mode of operation creates the shared tree first, followed by one or more source-specific trees if there is enough traffic to warrant it. Because building trees installs state in the routers along the tree, it is important that the default is to have only one tree for a group, not one for every sender to a group.All of its mechanisms for building and maintaining trees take advantage of unicast routing without depending on any particular unicast routing protocol. The formation of trees is entirely determined by the paths that Join messages follow, which is

determined by the choice of shortest paths made by unicast routing. Thus, to be precise, PIM is “unicast routing protocol independent,” as compared to DVMRP. Note that PIM is very much

bound up with the Internet Protocol—it is not protocol independent in terms of network-layer protocols.

The design of PIM-SM again illustrates the challenges in building scalable networks, and how scalability is sometimes pitted against some sort of optimality. The shared tree is certainly more scalable than a source-specific tree, in the sense that it reduces the total state in routers to be on the order of the number of groups rather than the number of senders times the number of groups. However, the source-specific tree is likely to be necessary to achieve efficient routing and effective use of link bandwidth 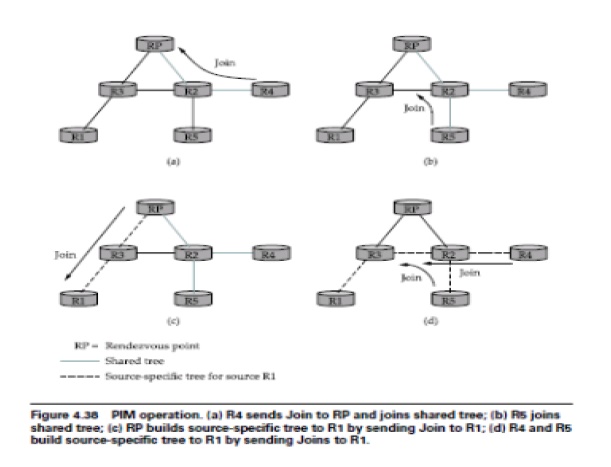