This section looks at a variety of techniques that greatly improve scalability and that have enabled the Internet to grow as far as it has.

We have seen how to connect a heterogeneous collection of networks to create an internetwork and how to use the simple hierarchy of the IP address to make routing in an internet somewhat scalable. We say “somewhat” scalable because even though each router does not need to know bout all the hosts connected to the internet, it does, in the model described so far, need to know about all the networks connected to the internet. Today’s Internet has tens of thousands of networks connected to it. Routing protocols such as those we have just discussed do not scale to those kinds of numbers. This section looks at a variety of techniques that greatly improve scalability and that have enabled the Internet to grow as far as it has. Before getting to these techniques, we need to have a general picture in our heads of what the global Internet looks like. It is not just a random interconnection of Ethernets, but instead it takes on a shape that reflects the fact that it interconnects many different organizations. The regional networks were, in turn, connected by a nationwide backbone. In 1990 this backbone was funded by the National Science Foundation (NSF) and was therefore called the NSFNET backbone. Although the detail is not shown in this figure, the provider networks are typically built from a large number of point-to-point links (e.g., DS-3 or OC-3 links) that connect to routers; similarly, each end user site is typically not a single network, but instead consists of multiple physical networks connected by routers and bridges. For example, it is quite likely that different providers will have different

ideas about the best routing protocol to use within their network, and on how metrics should be assigned to links in their network. Because of this independence, each provider’s network is

usually a single autonomous system (AS). The fact that the Internet has a discernible structure can be used to our advantage as we tackle the problem of scalability. In fact, we need to deal with two related scaling issues. The first is the scalability of routing. We need to find ways to minimize the number of network numbers that get carried around in routing protocols and stored in the routing tables of routers. The second is address utilization that is, making sure that The IP address space does not get consumed too quickly. 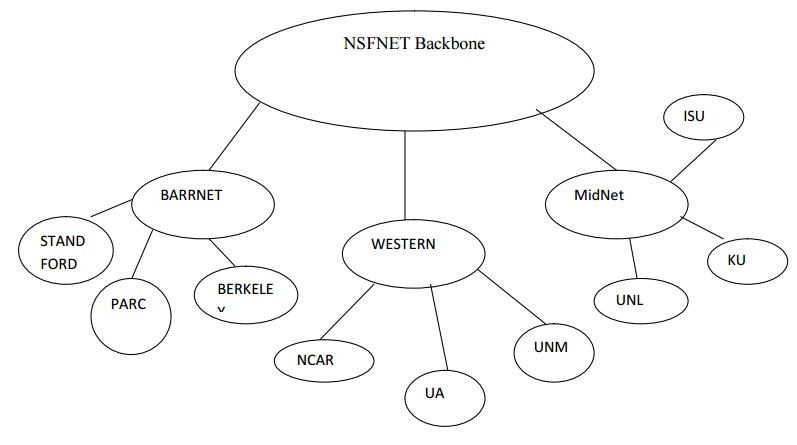 The tree structure of the Internet in 1990.