Some of these are illustrated in figs 27.1 and 27.2. The mangrove oyster, C. rhizophorae, has been cultivated on a relatively smaller scale in Cuba and Venezuela. A number of other species of mangrove oysters have been experimentally cultivated in tropical areas, such as C. tulipa in Sierra Leone, C. brasiliana in Braziland C. belcherii in Malaysia, but no commercial production has so far been reported. The slipper oyster C. iredalei is cultured in some areas of the Philippines. Most of the cupped oysters grow well at temperatures between 10 and 30°C, though for spawning and larval development temperatures around 20°C are considered optimal. Tropical species like the mangrove oyster, the Chinese oyster (C. rivularis) and the slipper oyster tolerate highertemperatures up to 34°C. The flat oyster is less tolerant of high temperatures and grows well only between 10 and 24°C. High mortality occurs above 26°C. Unlike the cupped oysters, the flat oyster cannot withstand continued freezing temperatures. Spawning occurs between 13 and 18°C, which is the optimal temperature range for larval development as well. On the whole, flat oysters are more sensitive to temperature variation. 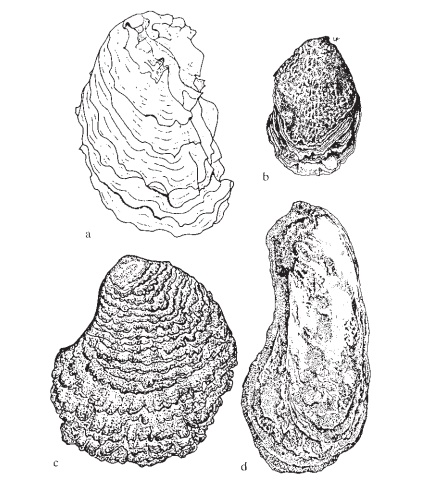 Most oysters attach themselves to hard substrates and can tolerate wide variations in salinity, often between 5 and 32 ppt. The mangrove and slipper oyster can tolerate up to 40–45 ppt, even though the optimum is below 37 ppt. Lower salinities between 15 and 16 ppt are considered preferable for larval development. The flat oyster is reported to thrive best at salinities above 25 ppt. Being filter-feeders, they draw their food, consisting of phytoplankton and other organic matter, through an inhalant current of water into the mantle. From there the selected food passes into the alimentary tract through the mouth, and the material rejected by the buccal palps is expelled.

Both groups of oysters are protandrous and they generally develop first as males and then may change to females. Change of sex may occur between spawning seasons, as in Crassostrea, or even within the same season, as in Ostrea species. The spawning behaviour of 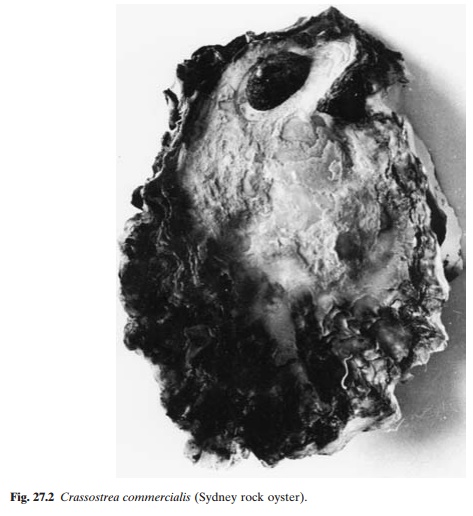 Crassostrea is different from that of Ostrea. Fertilization and larval development are external in Crassostrea, and males and females release gametes into the water. In Ostrea, the female draws the sperm expelled by the male into the pallial cavity near the gills by the inhalant current, and the eggs are fertilized there. The development of eggs and hatching take place in the pallial cavity. When they reach the stage of free-swimming veligers, they are expelled into the surrounding water.

Larval development usually takes up to three weeks, starting with the motile trochophore, followed by the swimming veliger stage. Once the shell hardens and a foot is developed, the larva is able to crawl around and find a substrate forattachment. Though any hard surface may be suitable for attachment, the flat oyster appears to prefer calcareous substrates.