The earliest system of oyster culture, which still prevails in many places, is referred to as bottom culture, where oysters are grown on the sea bottom either in intertidal or subtidal areas.

The earliest system of oyster culture, which still prevails in many places, is referred to as bottom culture, where oysters are grown on the sea bottom either in intertidal or subtidal areas.

This may involve collection of spat from areas of abundant spat-fall and planting them on suitable beds for on-growing. In areas which are suitable for both spat collection and on-growing, the main intervention by the oyster farmer may only be the provision of molluscan

shells to stiffen the bottom and to serve as cultch for the attachment of spat, and possible protection from pests and predators. Though this system is the least productive, it continues to be practised because of legal restrictions on the use of off-bottom floating structures in the coastal areas, or because off-bottom culture has not proved economical under local conditions. 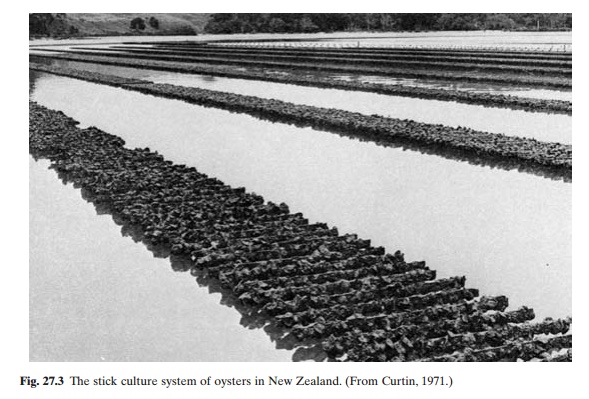 Off-bottom culture systems include stake/ stick culture (fig. 27.3), suspended culture and rack culture. Among these, the earliest is probably the stake or stick culture system, where bamboo, wooden or cement stakes or sticks are driven into the bottom or set out horizontally on racks to catch spat. Grow-out may be in the spat-catching area itself or, more often, in separate grow-cut areas. The stake or stick system is particularly useful in intertidal areas with soft mud bottoms.

The stone-bridge method of culture employed in China for growing oysters (C. rivularis) in muddy areas involves the collection ofspat on cement slabs placed in the form of a series of inverted Vs (L) (fig. 27.4). The seed oysters are generally allowed to grow in the same area where they are caught. 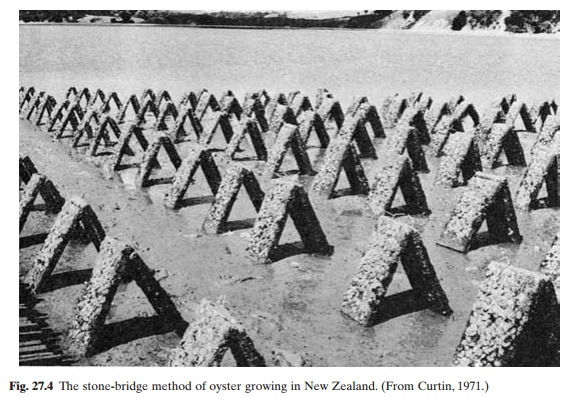 In typical rack culture systems, racks of different designs are used to suspend trays (fig. 27.5) or strings/ropes carrying oyster cultch in or near intertidal zones.They are generally built to about 1–2 m height. Strings of shells or other types of cultch can be either hung or placed horizontally on the racks for growing. 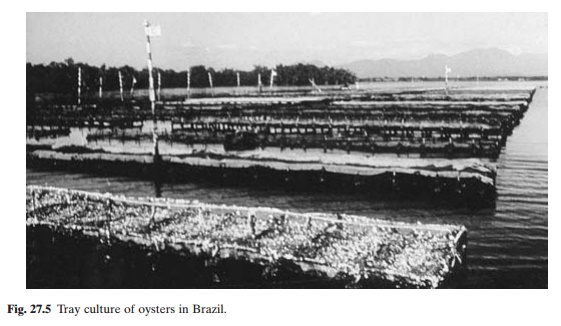 In suspended culture systems, strings/ropes or trays are suspended from floating rafts or long lines (fig. 27.6). While rafts are used in protected areas, long lines anchored at both ends and supported by floats can be laid out in more exposed areas. Different designs of trays have been developed from the earlier ones made of wood and wire screens. As well as rubber, plasticcoated wire mesh and polypropylene, special metal alloys are also being used to reduce biofouling. 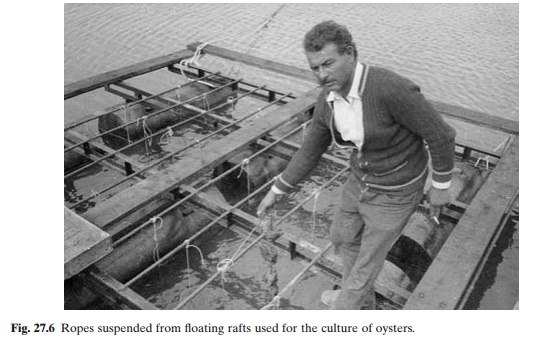 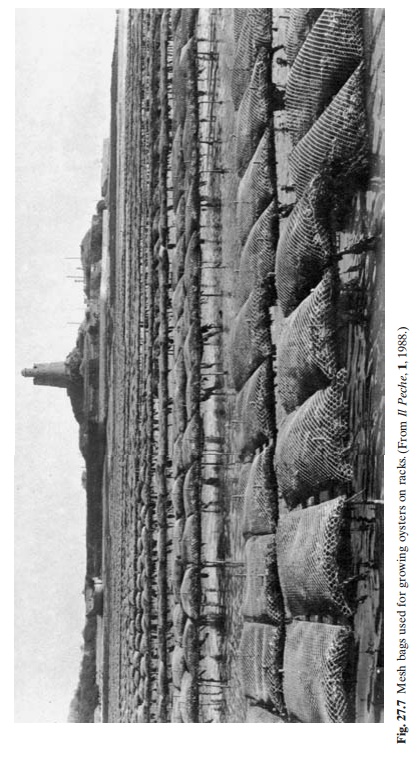 Polyethylene mesh bags, made in the shape of Chinese lanterns and suspended from long lines, are especially suitable for growing cultch-less oysters.

There are a number of other types of containers and substrates which are being tried for off-bottom culture of oysters. Other systems under trial are raceway and pond culture (Lee et al., 1981) and recirculating systems (Pruder et al., 1977).