As mentioned earlier, grow-out is on the sea bed itself, on bouchets or stakes, or suspended on rafts or long lines, on ropes or in mesh bags. In

As mentioned earlier, grow-out is on the sea bed itself, on bouchets or stakes, or suspended on rafts or long lines, on ropes or in mesh bags. In the majority of cases, the seed have to be transferred from the collecting area to growing areas. In bottom culture, the seed are planted as evenly as possible. During the growing period, the duration of which depends on local conditions, care is taken to avoid overcrowding, and if sample dredge hauls show more than about 8 kg mussels per m2 on the beds the stock is redistributed. Predators like starfish are regularly caught from the growing area and accumulations of silt are removed from the beds. The mussels may be reared in the same bed until they reach a marketable size of about 5–5.5 cm or in some cases they may be transplanted to deeper plots for fattening. High-quality mussels may measure 6–7 cm in shell length and contain about 25–30 per cent of flesh by weight.

In bouchet culture, the seed collected are transferred to bouchets erected for grow-out in the higher regions of the intertidal zone.They are placed in cylindrical nylon nets forming bags of about 5 cm length and 10 cm diameter. The net bags are wound round the bouchets. The loosely packed mussel seed rearrange themselves in the bag with their siphons directed outwards. Eventually they crawl through the meshes, but remain attached to the nets or the shells of other mussels. The nets gradually disintegrate and the mussels remain clustered on the bouchets until they reach market size.

In raft culture as practised in Spain, the seed collected on ropes usually appear like strings, formed by the young mussels attaching them-selves to each other. They are carefully stripped off and wound and bound to new growing ropes. A very fine synthetic fibre mesh net is used to enclose ropes with the mussel seed (fig. 27.18). Though the net is strong enough to keep 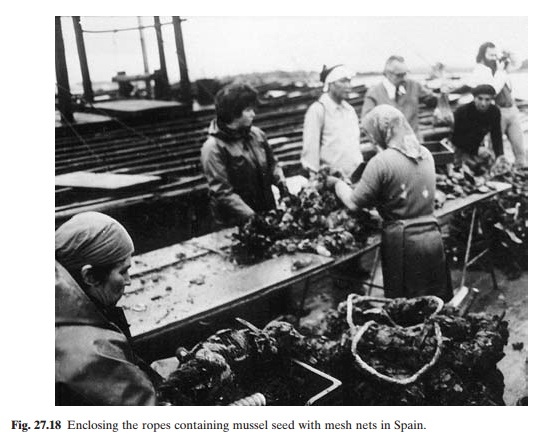 the mussels together, the meshes are easily broken by growing mussels. Seed mussels attached to one seed rope are generally enough to fill four or five growing ropes. Some farmers use rolls of meshed tissue to hold young mussels round the ropes. As the mussels are continually submerged in water with an abundant growth of phytoplankton and small particles of detritus, they grow quite rapidly. By the following spring, after a growth of about six months, the mussels are again transferred to new growing ropes to provide adequate space for growth to commercial size. Mussels from one rope are generally enough to cover three new ropes. During such thinning, all fouling organisms are eliminated and then the ropes are suspended on the raft. The mussels are harvested after about four months, when they have grown to the market size of 5–8 cm. In semi-tropical climates it seldom takes more than 14 months to attain that size. To produce mussels of uniform size the ropes will have to be turned over during the growing period. In Spain it is usual to have in the same park ropes for collecting seed, ropes covered with seed for growing young mussels and ropes for growing marketable mussels. If the producer operates only one raft, he will have separate ropes with differentsized groups of mussels on the same raft.

In the off-bottom type of culture practised in Italy, mussel parks consist of networks of poles planted on the shallow muddy bottoms of protected areas, connected with horizontal ropes. The strings of mussels (collected on separate seed-collecting ropes from the park itself, or from nearby areas) are suspended from the horizontal ropes and permanently submerged in sea water. The grow-out method in long-line culture is also very similar.

For culture of the green mussel in Venezuela, wooden rafts very similar to the Spanish mussel rafts are used, in highly productive seas like Golfo de Cariaco (Estado Sucre), near areas of upwelling. In New Zealand, where there are restrictions on the use of coastal areas, submerged platforms and rafts have been used for culturing the green mussel. Plastic receptacles strung on ropes have been used to keep the mussels for on-growing. With the expansion of export markets for mussels, long line culture is now permitted in the country.

The production of marketable mussels varies according to the characteristics of the location, especially the tidal flow, primary production, temperature conditions and stock density. Suspended culture is normally more productive than bottom culture. In the rias of Spain where primary productivity is, on average, 10.5 mg carbon/l per hour, the average annual production per raft of 600 culture ropes is reported to be about 50 tons. In the bouchet type of culture, production per pole is around 10 kg per year and about 4500 kg per ha. The yield from suspended culture in the Mediterranean is about 100 kg/m2, when only one-quarter of the total area of a mussel park is used for on-growing. Observations in Spain show that sunlight has a major influence on the behaviour of the blue mussel. Changes of light intensity affect the mobility of the mussels. Mussels living in darkness are reported to weigh more than 25 per cent of those living in semi-darkness and more than 69 per cent of those exposed to light. The degree of pigmentation is also influenced by light.

Most of the predators and pests of oysters affect mussels as well, especially in bottom culture. Young mussels and weak adults are attacked by shore crabs, starfish, sting rays (Trygon), ducks, sea gulls and other birds. Barnacles, shipworm (Teredo) and polychaete worms (Polydora) are serious pests. The most disastrous losses of mussels have been caused by the intestinal parasite (copepod) Mytilicolaintestinalis, and the infection is more pronounced in areas with dense populations.

The occurrence of red tide affects growing mussels very seriously. When blooms of dinoflagellates (Dinophysis, Porocentrum) occur, the sale of mussels has to be suspended as consumption of mussels from the affected areas may cause gastro-intestinal disorders. Dino-flagellates of the genus Goniaulax are more dangerous, as they cause paralytic shellfish poisoning. 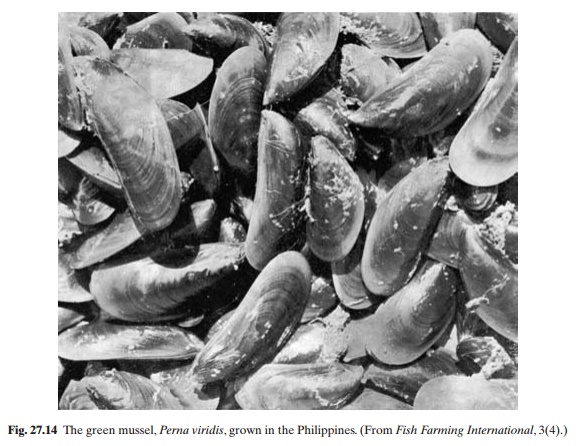 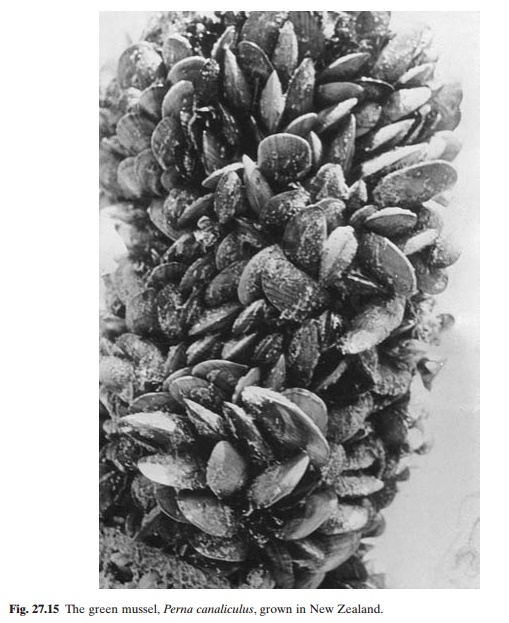