All living things in the world need oxygen. We cannot imagine the world without oxygen. Swedish chemist C. W. Scheele first discovered oxygen in 1772. He called the gas fire air or vital life because it was found to support the process of burning. It was independently discovered by the British scientist Joseph Priestley in 1774. Lavoisier named oxygen. The name oxygen comes from the Greek word ‘oxygenes’ which means ‘acid producer’. It is called so because early chemists thought that oxygen is necessary for producing acids.

Oxygen is the most abundant element on the earth by mass and the third most abundant element after Hydrogen and Helium in the universe. It occurs both in free state and combined state. It is present in free state as diatomic molecule (O2) in the atmosphere. Most of this has been produced by photosynthesis in which the chlorophyll present in the leaves of plants uses solar energy to produce glucose. 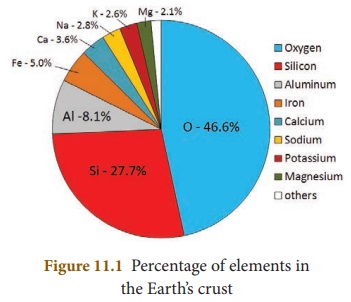 * Oxygen is a colourless, odourless and tasteless gas.

* It is a poor conductor of heat and electricity

Oxygen is about two times more soluble in water than nitrogen. If it had the same solubility as nitrogen, then less oxygen would be present in seas, lakes and rivers that will make life much more difficult for living organisms.

* It is denser than air.

* It can be made into liquid (liquified) at high pressure and low temperature.

Oxygen is a non-combustible gas as it does not burn on its own. But, it supports the combustion of other substances.

If oxygen has the capacity toburn itself, striking a match stick will be enough to burn allthe oxygen in our planet’s atmosphere.

Oxygen reacts with metals like sodium, potassium, magnesium, aluminium, iron etc. , to form their corresponding metal oxides which are generally basic in nature. But the metals differ in their reactivity towards oxygen.

Heat a strip of magnesium ribbon in the flame till it catches fire and introduce it into the jar containing oxygen. It burns with a dazzling bright light and white ash of magnesium oxide is formed. 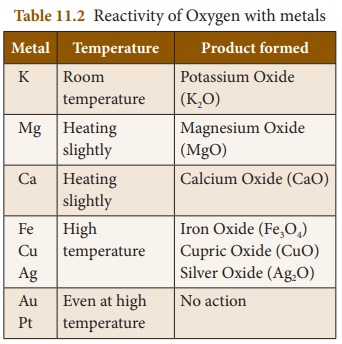 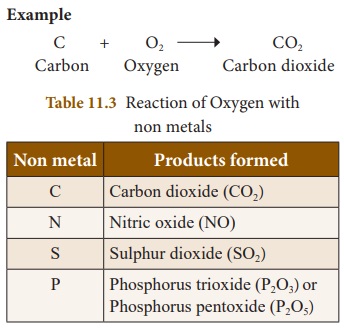 Heat a small piece of phosphorous and introduce it into the oxygen jar. Phosphorous burns with suffocating smell and gives phosphorous pentoxide (white fumes).

The process of conversion of iron into its hydrated form of oxide in the presence of air and moisture (humid atmosphere) is calle d rusting. Rust is hydrated ferric oxide.

(x is the number of water molecules which is variable)

* It is used as oxy-acetylene cylinder for cutting and welding metals.

* It is used to remove carbon impurities from steel.

* Plants and animals use oxygen from the air for respiration.

* It is used as rocket fuel.

* It is used for artificial respiration by scuba divers, mountaineers, astronauts, patients etc.

* Mixed with powdered charcoal it is used as explosives.

* It is used in the synthesis of methanol and ammonia.