Carbon dioxide is a chemical compound in which one carbon and two oxygen atoms are bonded together. It is a gas at room temperature. It is represented by the formula CO2. It is found in the earth’s atmosphere and it sends back the solar energy which is reflected by the surface of the earth, to make it possible for living organisms to survive. When carbon dioxide accumulates more in the atmosphere it produces harmful effects.

Carbon dioxide is present in air to the extent of about 0.03% by volume. It is evolved by the plants and animals during respiration and is produced during fermentation reactions. Much of the naturally occurring CO2 is emitted from the magma through volcanoes. CO2 may also originate from the bio degradation of oil and gases. Carbon dioxide emitted by human upset the natural balance of the carbon cycle. Man-made CO2 in the atmosphere has increased global temperatures which is warming the planet. While CO2 derived from fossil-fuel is a very small component of the global carbon cycle, the extra CO2 is cumulative because the natural carbon exchange cannot absorb all the additional CO2.

* Carbon dioxide is a colourless and odourless gas.

* It is heavier than air.

* It does not support combustion.

* It is fairly soluble in water and turns blue litmus slightly red. So it is acidic in nature.

* It can easily be liquified under high pressure and can be solidified. This solid form of CO2 is called dry ice which undergoes sublimation.

The process of conversion of solid into vapour without reaching liquid state is called sublimation.

It is non-combustible gas and not a supporter of combustion.

Lighter metals like sodium, potassium and calcium, combine with CO2 to form corresponding carbonates whereas magnesium gives its oxide and carbon.

Sodium hydroxide (base) is neutralized by carbon dioxide (acidic) to form sodium bicarbonate (salt) and water.

When a limited amount of CO2 is passed through lime water, it turns milky due to the formation of insoluble calcium carbonate.

When an excess amount of CO2 is passed through lime water, it first turns milky and the milkyness disappears due to the formation of soluble calcium hydrogen carbonate, Ca(HCO3) 2.

Venus’ atmosphere consists of roughly 96 -97% carbon dioxide. Because of theamount of carbon dioxide present, the surface of Venus continually retains heat and as such, the surface temperature of Venus is roughly 462°C, making it the hottest planet in our solar system.

* CO2 is used to prepare soft drinks or aerated drinks

* It is used in fire extinguishers

* It is used in the manufacturing of sodium carbonate by Solvay process.

* Solid carbon dioxide, called as dry ice is used as a refrigerant. The gas is so cold that moisture in the air condenses on it, creating a dense fog which is used in stage shows and movie effects.

* It is used along with ammonia in the manufacture of fertilizers like urea.

* CO2 can be used in the preservation of food grains, fruits etc. 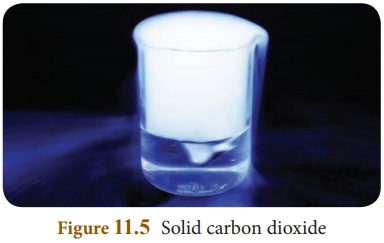 Aerated water is nothing but carbon dioxide dissolved in water under pressure. This is also called ‘soda water’.