Nitrogen is one of the most important elements. Animals and plants need nitrogen for their growth. All living organisms (including us) contain nitrogen. It is an essential element present in proteins and nucleic acids which are the ‘building blocks’ of all living things. It was first isolated from the air by Daniel Rutherford in 1772. The name ‘nitrogen’ is derived from the Greek words ‘nitron’ and ‘gene’ meaning ‘I produce nitre’. Nitre is potassium nitrate compound of nitrogen. Antoine Lavoisier suggested the name azote, from the Greek word meaning ‘no life’.

Nitrogen is the fourth most abundant element in the human body. It accounts for about three percent of the mass of the human body. It is thought to be the seventh most abundant element in the universe. Titan, the largest moon of Saturn, has an atmosphere made up of 98% Nitrogen. Nitrogen occurs both in free state and combined state. Nitrogen exists in free state in the atmospheric air as dinitrogen (N2) . It is present in volcanic gases and gases evolved by burning of coal. Nitrogen is present in combined state in the form of minerals like nitre (KNO3) and chile salt petre (NaNO3) . It is present in organic matters such as protein, enzymes, nucleic acid etc.

* It is a colourless, tasteless and odourless gas.

* It is slightly lighter than air.

* It is slightly soluble in water.

* Nitrogen becomes a liquid at low temperature and looks like water.

* When it freezes, it becomes a white solid.

Nitrogen is inactive at ordinary conditions. It combines with many elements at high temperature and pressure or in the presence of catalyst.

* Liquid nitrogen is used as a refrigerant.

* It provides an inert atmosphere forconducting certain chemical reactions. It is used to prepare ammonia (by Haber’s process) which is then converted into fertilizers and nitric acid.

* Nowadays it is used as a substitute for compressed air in tyres.

* It is used for filling the space above mercury in high temperature thermometer to reduce the evaporation of mercury.

* Many explosives such as TNT (Trinitrotoluene), nitroglycerin, and gun powder contain nitrogen.

* It is used for the preservation of foods, manufacturing of stainless steel, reducing fire hazards, and as part of the gas in incandescent light bulbs. 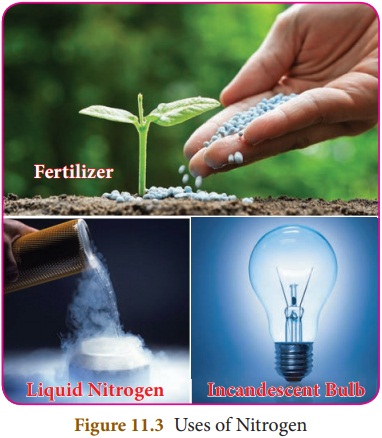 Answer: It is because nitrogen tyres hold pressure longer as compared to compressed air. Nitrogen gas in the tyre escapes more slowly than compressed air does.

Nitrogen gets circulated in the air, soil and living things as the element itself or in the form of its compounds. Just as there is a circulation of carbon in nature so also there is a circulation of nitrogen. It is essential for the proper growth of all plants. The plants cannot make use of the elemental nitrogen from the air as such. The plants require soluble compounds of nitrogen. Thus, plants depend on other processes to supply them with nitrates. Any process that converts nitrogen in the air into a useful nitrogen compound is called nitrogen fixation. Fixation of nitrogen is carried out both naturally and by man. 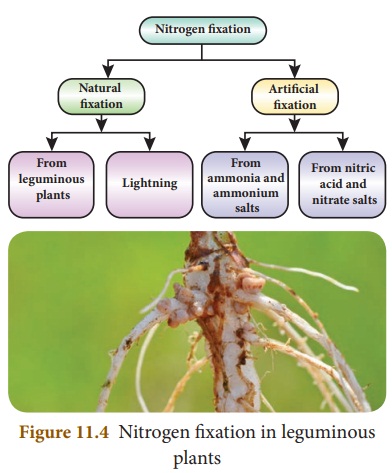