Effect of Very High PO2 on Blood Oxygen Transport. When thePO2 in the blood rises above 100 mm Hg, the amount of oxygen dissolved in the water of the blood increases markedly.

Effect of Very High PO2 on Blood Oxygen Transport. When thePO2 in the blood rises above 100 mm Hg, the amount of oxygen dissolved in the water of the blood increases markedly. This is shown in Figure 44–2, which depicts the same oxygen-hemoglobin dissociation curve but with the alveolar PO2 extended to more than 3000 mm Hg. Also depicted by the lowest curve in the figure is the volume of oxygendissolved in the fluid of the blood at each PO2level.Note that in the normal range of alveolar PO2 (below 120 mm Hg), almost none of the total oxygen in the blood is accounted for by dissolved oxygen, but as the oxygen pressure rises into the thousands of millime-ters of mercury, a large portion of the total oxygen is then dissolved in the water of the blood, in addition to that bound with hemoglobin. 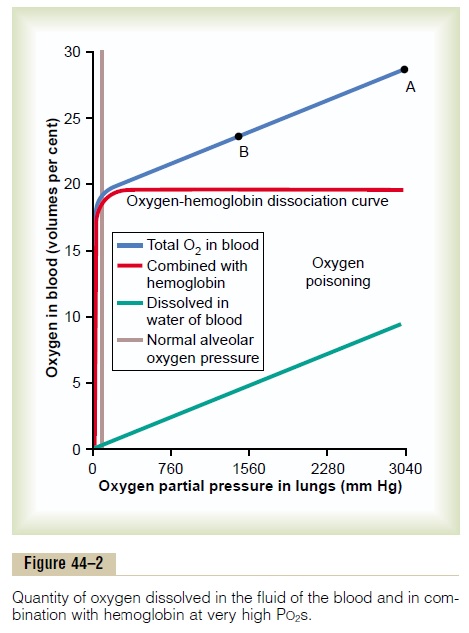 Effect of High Alveolar PO2 on Tissue PO2. Let us assume thatthe PO2 in the lungs is about 3000 mm Hg (4 atmos-pheres pressure). Referring to Figure 44–2, one finds that this represents a total oxygen content in each 100 milliliters of blood of about 29 volumes per cent, as demonstrated by point A in the figure—this means 20 volumes per cent bound with hemoglobin and 9 volumes per cent dissolved in the blood water. As this blood passes through the tissue capillaries and the tissues use their normal amount of oxygen, about 5 milliliters from each 100 milliliters of blood, the oxygen content on leaving the tissue capillaries is still 24 volumes per cent (point B in the figure). At this point, the PO2 is approximately 1200 mm Hg, which means that oxygen is delivered to the tissues at this extremely high pressure instead of at the normal value of 40 mm Hg. Thus, once the alveolar PO2 rises above a critical level, the hemoglobin-oxygen buffer mechanism  is no longer capable of keeping the tissue PO2 in the normal, safe range between 20 and 60 mm Hg.

Acute Oxygen Poisoning. The extremely high tissue PO2that occurs when oxygen is breathed at very high alve-olar oxygen pressure can be detrimental to many of the body’s tissues. For instance, breathing oxygen at 4 atmospheres pressure of oxygen (PO2 = 3040 mm Hg) will cause brain seizures followed by coma in most people within 30 to 60 minutes. The seizures often occur without warning and, for obvious reasons, are likely to be lethal to divers submerged beneath the sea.

Other symptoms encountered in acute oxygen poi-soning include nausea, muscle twitchings, dizziness, disturbances of vision, irritability, and disorientation. Exercise greatly increases the diver’s susceptibility to oxygen toxicity, causing symptoms to appear much earlier and with far greater severity than in the resting person.

Excessive Intracellular Oxidation as a Cause of Nervous System Oxygen Toxicity—“Oxidizing Free Radicals.” Molecular oxygen (O2) has little capabilityof oxidizing other chemical compounds. Instead, it must first be converted into an “active” form of oxygen. There are several forms of active oxygen called oxygen free radicals. One of the most important of these is the superoxide free radical O2_, and another is the peroxide radical in the form of hydrogen perox-ide. Even when the tissue PO2 is normal at the level of 40 mm Hg, small amounts of free radicals are contin-ually being formed from the dissolved molecular oxygen. Fortunately, the tissues also contain multiple enzymes that rapidly remove these free radicals, including peroxidases, catalases, and superoxide dis-mutases. Therefore, so long as the hemoglobin-oxygenbuffering mechanism maintains a normal tissue PO2, the oxidizing free radicals are removed rapidly enough that they have little or no effect in the tissues.

Above a critical alveolar PO2 (above about 2 atmospheres PO2), the hemoglobin-oxygen buffering mechanism fails, and the tissue PO2 can then rise to hundreds or thousands of millimeters of mercury. At these high levels, the amounts of oxidizing free radi-cals literally swamp the enzyme systems designed to remove them, and now they can have serious destruc-tive and even lethal effects on the cells. One of the principal effects is to oxidize the polyunsaturated fatty acids that are essential components of many of the cell membranes. Another effect is to oxidize some of the cellular enzymes, thus damaging severely the cellular metabolic systems. The nervous tissues are especially susceptible because of their high lipid content.

Therefore, most of the acute lethal effects of acute oxygen toxicity are caused by brain dysfunction.

Chronic Oxygen Poisoning Causes Pulmonary Disabil- ity. A person can be exposed to only 1 atmospherepressure of oxygen almost indefinitely without devel-oping the acute oxygen toxicity of the nervous system just described. However, after only about 12 hours of 1 atmosphere oxygen exposure, lung passageway con-gestion, pulmonary edema, and atelectasis caused bydamage to the linings of the bronchi and alveoli begin to develop. The reason for this effect in the lungs but not in other tissues is that the air spaces of the lungs are directly exposed to the high oxygen pressure, but oxygen is delivered to the other body tissues at almost normal PO2because of the hemoglobin-oxygen buffer system.