Decompression of the Diver After Excess Exposure to High Pressure

When a person breathes air under high pressure for a long time, the amount of nitrogen dissolved in the body fluids increases.

Decompression of the Diver After Excess Exposure to High Pressure

When a person breathes air under high pressure for a long time, the amount of nitrogen dissolved in the body fluids increases. The reason for this is the following: Blood flowing through the pulmonary capil-laries becomes saturated with nitrogen to the same high pressure as that in the alveolar breathing mixture.

And over several more hours, enough nitrogen is carried to all the tissues of the body to raise their tissue PN2 also to equal the PN2 in the breathing air.

Because nitrogen is not metabolized by the body, it remains dissolved in all the body tissues until the nitro-gen pressure in the lungs is decreased back to some lower level, at which time the nitrogen can be removed by the reverse respiratory process; however, this removal often takes hours to occur and is the source of multiple problems collectively called decompressionsickness.

After the diver has become saturated with nitrogen, the sea-level volume of nitrogen dissolved in the body at different depths is as follows: 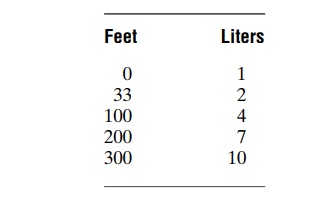 Several hours are required for the gas pressures of nitrogen in all the body tissues to come nearly to equi-librium with the gas pressure of nitrogen in the alveoli. The reason for this is that the blood does not flow rapidly enough and the nitrogen does not diffuse rapidly enough to cause instantaneous equilibrium. The nitrogen dissolved in the water of the body comes to almost complete equilibrium in less than 1 hour, but the fat tissue, requiring five times as much transport of nitrogen and having a relatively poor blood supply, reaches equilibrium only after several hours. For this reason, if a person remains at deep levels for only a few minutes, not much nitrogen dissolves in the body fluids and tissues, whereas if the person remains at a deep level for several hours, both the body water and body fat become saturated with nitrogen.

Decompression Sickness (Synonyms: Bends, Compressed Air Sickness, Caisson Disease, Diver’s Paralysis, Dysbarism). If adiver has been beneath the sea long enough that large amounts of nitrogen have dissolved in his or her body and the diver then suddenly comes back to the surface of the sea, significant quantities of nitrogen bubbles can develop in the body fluids either intracellularly or extracellularly and can cause minor or serious damage in almost any area of the body, depending on the number and sizes of bubbles formed; this is called decompression sickness.

The principles underlying bubble formation are shown in Figure 44–3. In Figure 44–3A, the diver’s tissues have become equilibrated to a high dissolved 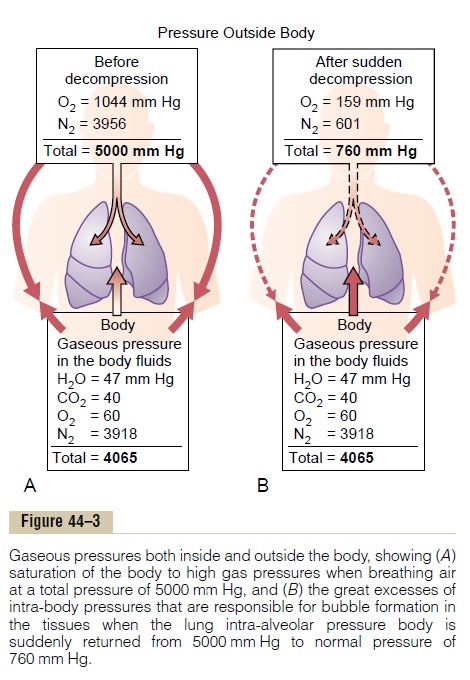 nitrogen pressure (PN2=3918 mm Hg), about 6.5times the normal amount of nitrogen in the tissues. As long as the diver remains deep beneath the sea, the pressure against the outside of his or her body (5000 mm Hg) compresses all the body tissues suffi-ciently to keep the excess nitrogen gas dissolved. But when the diver suddenly rises to sea level (Figure 44–3B), the pressure on the outside of the body becomes only 1 atmosphere (760 mm Hg), while the gas pressure inside the body fluids is the sum of the pressures of water vapor, carbon dioxide, oxygen, and nitrogen, or a total of 4065 mm Hg, 97 per cent of which is caused by the nitrogen. Obviously, this total value of 4065 mm Hg is far greater than the 760 mm Hg pressure on the outside of the body. Therefore, the gases can escape from the dissolved state and form actual bubbles, composed almost entirely of nitrogen, both in the tissues and in the blood where they plug many small blood vessels. The bubbles may not appear for many minutes to hours, because sometimes the gases can remain dissolved in the “supersaturated” state for hours before bubbling.

Symptoms   of Decompression Sickness (“Bends”). The symptoms of decompression sickness are caused by gas bubbles blocking many blood vessels in different tissues. At first, only the smallest vessels are blocked by minute bubbles, but as the bubbles coalesce, progressively larger vessels are affected.

Tissue ischemia and sometimes tissue death are the result.

In 5 to 10 per cent of people with decompression sickness, nervous system symptoms occur, ranging from dizziness in about 5 per cent to paralysis or col-lapse and unconsciousness in as many as 3 per cent. The paralysis may be temporary, but in some instances, damage is permanent.

Finally, about 2 per cent of people with decompres-sion sickness develop “the chokes,” caused by massive numbers of microbubbles plugging the capillaries of the lungs; this is characterized by serious shortness of breath, often followed by severe pulmonary edema and, occasionally, death.

Nitrogen Elimination from the Body; Decompression Tables. Ifa diver is brought to the surface slowly, enough of the dissolved nitrogen can usually be eliminated by expi-ration through the lungs to prevent decompression sickness. About two thirds of the total nitrogen is lib-erated in 1 hour and about 90 per cent in 6 hours.

Decompression tables have been prepared by the U.S. Navy that detail procedures for safe decompres-sion. To give the student an idea of the decompression process, a diver who has been breathing air and has been on the sea bottom for 60 minutes at a depth of 190 feet is decompressed according to the following schedule:

Thus, for a work period on the bottom of only 1 hour, the total time for decompression is about 3 hours.

Tank Decompression and Treatment of Decompression Sick-ness. Another procedure widely used for decompres-sion of professional divers is to put the diver into a pressurized tank and then to lower the pressure grad-ually back to normal atmospheric pressure, using essentially the same time schedule as noted above.

Tank decompression is even more important for treating people in whom symptoms of decompression sickness develop minutes or even hours after they have returned to the surface. In this case, the diver is recompressed immediately to a deep level. Then decompression is carried out over a period several times as long as the usual decompression period.

“Saturation Diving” and Use of Helium-Oxygen Mixtures in Deep Dives. When divers must work at very deep levels—between 250 feet and nearly 1000 feet—they fre-quently live in a large compression tank for days or weeks at a time, remaining compressed at a pressure level near that at which they will be working. This keeps the tissues and fluids of the body saturated with the gases to which they will be exposed while diving. Then, when they return to the same tank after working, there are no significant changes in pressure, so that decompression bubbles do not occur.

In very deep dives, especially during saturation diving, helium is usually used in the gas mixture instead of nitrogen for three reasons: (1) it has only about one fifth the narcotic effect of nitrogen; (2) only about one half as much volume of helium dissolves in the body tissues as nitrogen, and the volume that does dissolve diffuses out of the tissues during decompres-sion several times as rapidly as does nitrogen, thus reducing the problem of decompression sickness; and (3) the low density of helium (one seventh the density of nitrogen) keeps the airway resistance for breathing at a minimum, which is very important because highly compressed nitrogen is so dense that airway resistance can become extreme, sometimes making the work of breathing beyond endurance.

Finally, in very deep dives it is important to reduce the oxygen concentration in the gaseous mixture because otherwise oxygen toxicity would result. For instance, at a depth of 700 feet (22 atmospheres of pressure), a 1 per cent oxygen mixture will provide all the oxygen required by the diver, whereas a 21 per cent mixture of oxygen (the percentage in air) deliv-ers a PO2 to the lungs of more than 4 atmospheres, a level very likely to cause seizures in as little as 30 minutes.