Other Dependencies and Normal Forms

Other Dependencies and Normal Forms

We already introduced another type of dependency called join dependency (JD) in Section 15.7. It arises when a relation is decomposable into a set of projected relations that can be joined back to yield the original relation. After defining JD, we defined the fifth normal form based on it in Section 15.7. In the present section we will introduce some other types of dependencies that have been identified.

Inclusion dependencies were defined in order to formalize two types of interrelational constraints:

The foreign key (or referential integrity) constraint cannot be specified as a functional or multivalued dependency because it relates attributes across relations.

The constraint between two relations that represent a class/subclass relation-ship (see Chapters 8 and 9) also has no formal definition in terms of the functional, multivalued, and join dependencies.

The ⊆ (subset) relationship does not necessarily have to be a proper subset. Obviously, the sets of attributes on which the inclusion dependency is specified—X of R and Y of S—must have the same number of attributes. In addition, the domains for each pair of corresponding attributes should be compatible. For exam-ple, if X = {A1, A2, ..., An} and Y = {B1, B2, ..., B n}, one possible correspondence is to have dom(Ai) compatible with dom(Bi) for 1 ≤ i ≤ n. In this case, we say that Ai corresponds to Bi.

For example, we can specify the following inclusion dependencies on the relational schema in Figure 15.1:

As with other types of dependencies, there are inclusion dependency inference rules (IDIRs). The following are three examples:

Figure 16.5 shows how we may define functional, multivalued, and inclusion dependencies by templates. Figure 16.6 shows how we may specify the constraint that an employee’s salary cannot be higher than the salary of his or her direct supervisor on the relation schema EMPLOYEE in Figure 3.5.

Templates for some common type of dependencies. 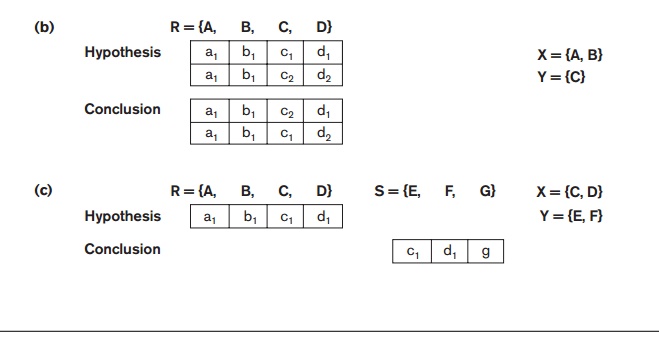 Templates for the constraint that an employee’s salary must be less than the supervisor’s salary.

3. Functional Dependencies Based on Arithmetic Functions and Procedures

Sometimes some attributes in a relation may be related via some arithmetic function or a more complicated functional relationship. As long as a unique value of Y is associated with every X, we can still consider that the FD X → Y exists. For example, in the relation

each tuple represents an item from an order with a particular quantity, and the price per unit for that item. In this relation, (Quantity, Unit_price ) → Extended_price by the formula

Hence, there is a unique value for Extended_price for every pair (Quantity, Unit_price ), and thus it conforms to the definition of functional dependency.

Moreover, there may be a procedure that takes into account the quantity discounts, the type of item, and so on and computes a discounted price for the total quantity ordered for that item. Therefore, we can say

To check the above FD, a more complex procedure COMPUTE_TOTAL_PRICE may have to be called into play. Although the above kinds of FDs are technically present in most relations, they are not given particular attention during normalization.

There is no hard-and-fast rule about defining normal forms only up to 5NF. Historically, the process of normalization and the process of discovering undesirable dependencies were carried through 5NF, but it has been possible to define stricter normal forms that take into account additional types of dependencies and constraints. The idea behind domain-key normal form (DKNF) is to specify (theo-retically, at least) the ultimate normal form that takes into account all possible types of dependencies and constraints. A relation schema is said to be in DKNF if all constraints and dependencies that should hold on the valid relation states can be enforced simply by enforcing the domain constraints and key constraints on the relation. For a relation in DKNF, it becomes very straightforward to enforce all data-base constraints by simply checking that each attribute value in a tuple is of the appropriate domain and that every key constraint is enforced.

There is no simplified way to represent such constraints short of writing a procedure (or general assertions) to test them. The procedure COMPUTE_TOTAL_PRICE above is an example of such procedures needed to enforce an appropriate integrity constraint.