Organize and Layout Windows and Pages

In graphical user interfaces, components to be included on windows include a title, screen controls, headings, other screen content, and possibly instructional messages.

Organize and Layout Windows and Pages

In graphical user interfaces, components to be included on windows include a title, screen controls, headings, other screen content, and possibly instructional messages.

On Web pages, components to be included consist of elements such as the page title, textual content, graphics, headings, screen controls, links, and other necessary components.

·        Present the proper amount of information on each screen.

o   Too little is inefficient.

o   Too much is confusing.

·        Present all information necessary for performing an action or making a decision on one screen, whenever possible.

o   Is logical and sequential.

o   Is rhythmic, guiding a person’s eye through the display.

·        Position the most important and frequently used controls at the top left.

·        If one control enables or affects another, the enabling control should be above or to the left of the enabled control.

·        Place the command buttons that affect the entire window horizontally, and centered, at the window’s bottom.

The flow of interaction should:

·        Require as little cursor and pointer travel as possible.

·        Minimize the number of times a person’s hand has to travel between the keyboard and the mouse.

Assist users in navigating through a screen by:

Provide a visually pleasing composition through:

·        Provide visual emphasis to the most important screen elements, its data or information.

·        Sequentially, direct attention to items that are:

·        With a person’s experiences and cultural conventions.

Organizational guidelines to be addressed include those relating to groupings, borders, dependent controls, alignment, and balance.

Elements of a radio button or check box control.

Create groupings as close as possible to 5 degrees of visual angle.

Provide adequate separation of groupings through the liberal use of white space.

Around groups of related controls.

Between groupings and window borders.

Provide headings that meaningfully and concisely describe the nature of the group of related fields.

Enhance groupings through incorporation of borders around:

Elements of a single control.

Groups of related controls or fields.

Individual control borders should be visually differentiable from borders

delineating groupings of fields or controls.

Provide a border consisting of a thin line around single controls.

Provide a border consisting of a slightly thicker line around groups of fields or controls.

Do not place individual field or control borders around:

Do not place borders around command buttons.

Groupings can be further enhanced through the use of borders. Inscribe line borders around elements of a single control such as a radio button or check box and/or groups of related controls or fields.

Individual control borders should be visually differentiable from borders delineating groupings of fields or controls.

Provide a border consisting of a thin line around single controls and a slightly thicker line around groups of fields or controls. 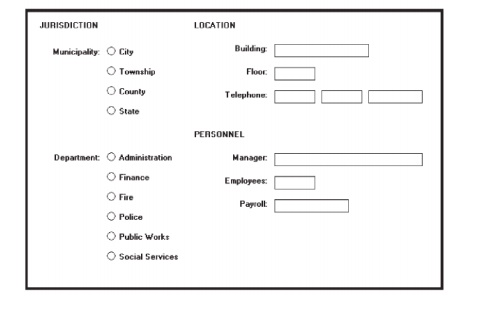 Incorporate a thin single-line border around the elements of a selection control.

Vertically, leave one line space above and below the control elements.

side of the control elements.

side of the longest control element.

Locate the control caption in the top border, indented one character position from the left border.

Alternately, locate the caption at the upper left of the box.

If the control caption exceeds the length of the choice descriptions, extend the border two character positions to the right of the caption. 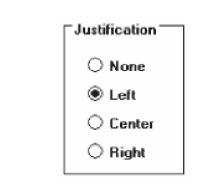 Incorporate a thicker single-line border around groups of related entry or selection controls.

Vertically, leave one line space between the top and bottom row of the entry or

Horizontally, leave at least four character positions to the left and right of the

Locate the section heading in the top border, indented two character positions from the left border. 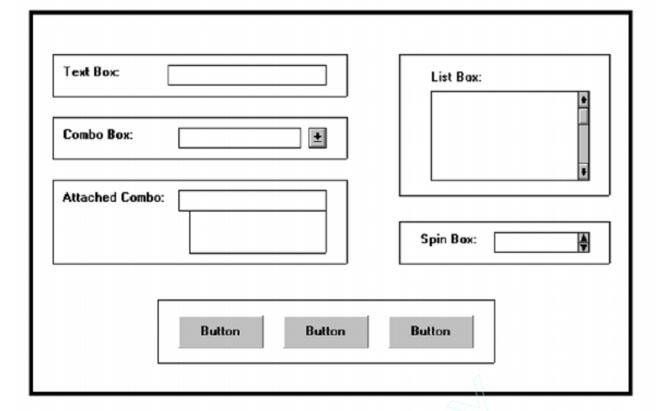 Position a conditional control, or controls:

To the right of the control to which it relates.

Alternately, position it below the control to which it relates.

Display these conditional controls in a subdued or grayed out manner.

When a control is relevant, return it to a normal intensity.

Do not display a conditional control until the information to which it relates is set.

controls to visually relate them to each other.

Minimize alignment points on a window.

Those inscribed within borders must be left-aligned. 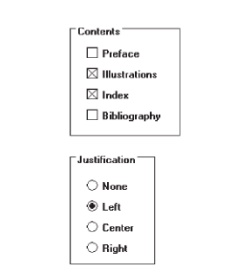 Those located at the left may be left- or right-aligned.

Left-align the boxes. If the screen will be used for inquiry or display purposes, numeric fields should be right-aligned.

Captions may be left- or right-aligned.

Those located above the boxes must be left-aligned. 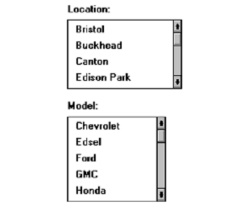 Those located at the left may be left- or right-aligned.

Field captions may be left- or right-aligned.

Captions may be left- or right-aligned. 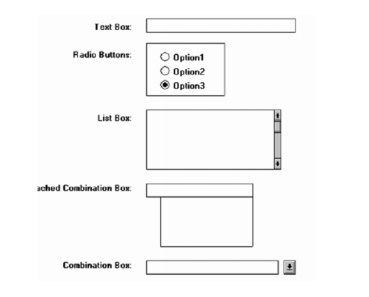 If more than one control with a border is incorporated within a column  on a screen:

Align the controls following the guidelines for multiple-control alignment.

Align the left and right borders of all groups.

Establish the left and right border positions according to the spacing required for the widest element within the groups. 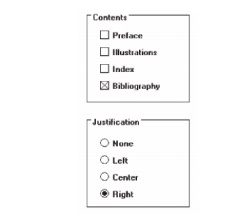 With multiple groupings and multiple columns, create a balanced screen by:

Maintaining equal column widths as much as practical.

Maintaining equal column heights as much as practical.

— If more than one section with borders is incorporated within a column         on a screen:

Align the left and right borders of all groups.

Establish the left and right border positions according to the spacing required by the widest element within the groups. 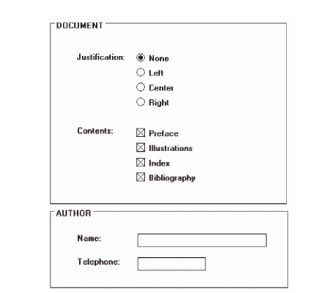 With multiple groupings and multiple columns, create a balanced screen by:

Maintaining equal column widths as much as practical.

Maintaining equal column heights as much as practical. 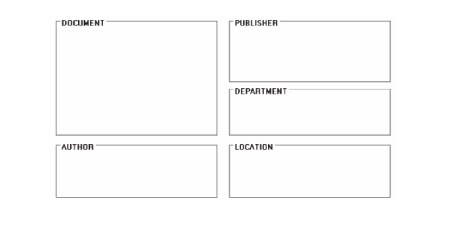 Present related information in a single window whenever possible.

Support the most common tasks in the most efficient sequence of steps.

Begin an interaction and provide top-level context for dependent

Obtain or display supplemental information related to the primary

— Minimize the number of windows needed to accomplish an objective.

Present all relevant and expected information for the task.

Not cause crowding or visual confusion.

Minimize the need for scrolling.

Less than the full size of the entire screen.

If a window is too large, determine:

Is all the information needed?

Is all the information related?

Testing steps to be reviewed are:

Identifying the purpose and scope of testing.

Understanding the importance of testing.

Modifying the prototype as necessary.

The Purpose of Usability Testing

First, it establishes a communication bridge between developers and users.

Through testing, the developer learns about the user’s goals, perceptions, questions, and problems.

Second, testing is used to evaluate a product. It validates design decisions. It also can identify potential problems in design at a point in the development process where they can be more easily addressed.

The Importance of Usability Testing

A thorough usability testing process is important for many reasons,

Developer’s intuitions are not always correct.

There is no average user.

Design standards and guidelines are not sufficient.

Problems found late are more difficult and expensive to fix.

Advantages over a competitive product can be achieved.

Testing should begin in the earliest stages of product development and continue throughout the development process.

A prototype is primarily a vehicle for exploration, communication, and evaluation. Its purpose is to obtain user input in design, and to provide feedback to designers.

A prototype is a simulation of an actual system that can be quickly created.

A prototype may be a rough approximation, such as a simple hand-drawn sketch, or it may be interactive, allowing the user to key or select data using controls, navigate through menus, retrieve displays of data, and perform basic system functions.

A prototype may have great breadth, including as many features as possible to present concepts and overall organization, or it might have more depth, including more detail on a given feature or task to focus on individual design aspects.

Focus is on the design, not the interface mechanics.

Can be used very early in the development process.

Suited for use by entire design team.

No large investment of time and cost.

Fast to modify and iterate.

Easier to comprehend than functional specifications.

Can be used to define requirements.

Only a rough approximation.

Limited in providing an understanding of navigation and flow.

A demonstration, not an exercise.

Driven by a facilitator, not the user.

Limited usefulness for a usability test.

A poor detailed specification for writing the code.

Usually restricted to most common tasks.

Sketch (storyboard) the screens while determining:

The source of the screen’s information.

The overall order of screens and windows.

Use an erasable medium.

Sketch the screens needed to complete each workflow task. o Try out selected metaphors and change them as necessary.

Then, go back and build in exceptions.

Don’t get too detailed; exact control positioning is not important, just overall order and flow.

Storyboard as a team, including at least one user.

Only develop online prototypes when everyone agrees that a complete set of screens has been satisfactorily sketched.

The components are manually manipulated to reflect the dynamics of the software.

Can be used to demonstrate the interaction.

Otherwise, generally the same as for hand-drawn sketches and scenarios.

Only a rough approximation.

A demonstration, not an exercise.

Driven by a facilitator, not the user.

Examples of finished dialogs and screens for some important aspects of the system.

May solidify the design too soon.

May create the false expectation that the “real thing” is only a short time away.

Not effective for requirements gathering.

Not all of the functions demonstrated may be used because of cost, schedule limitations, or lack of user interest.

Not practical for investigating more than two or three approaches.

An example of finished dialogs and screens for some important aspects of the system.

May include the final code.

Otherwise, generally the same as those of programmed facades.

Generally the same as for programmed facades.