As we know DNA and RNA are the two kinds of nucleic acids.

As we know DNA and RNA are the two kinds of nucleic acids. These were originally isolated from cell nucleus. They are present in all known cells and viruses with special coded genetic programme with detailed and specific instructions for each organism heredity. 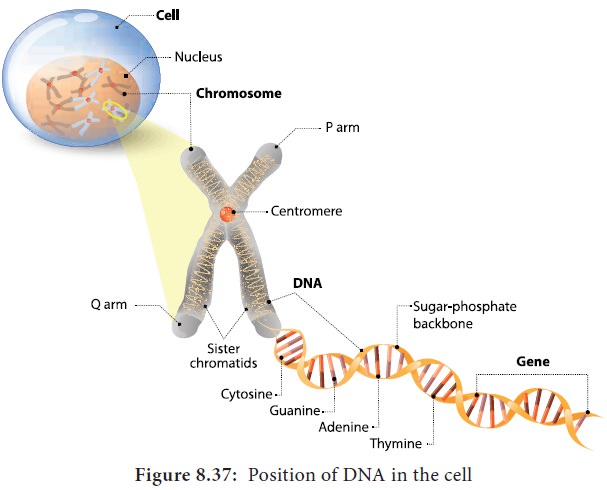 DNA and RNA are polymers of monomers called nucleotides, each of which is composed of a nitrogen base, a pentose sugar and a phosphate. A purine or a pyrimidine and a ribose or deoxyribose sugar is called nucleoside. A nitrogenous base is linked to pentose sugar through n-glycosidic linkage and forms a nucleoside. When a phosphate group is attached to a nucleoside it is called a nucleotide. The nitrogen base is a heterocyclic compound that can be either a purine (two rings) or a pyrimidine (one ring). There are 2 types of purines – adenine (A) and guanine (G) and 3 types of pyrimidines – cytosine (C), thymine (T) and uracil (U) (Figure 8.38). 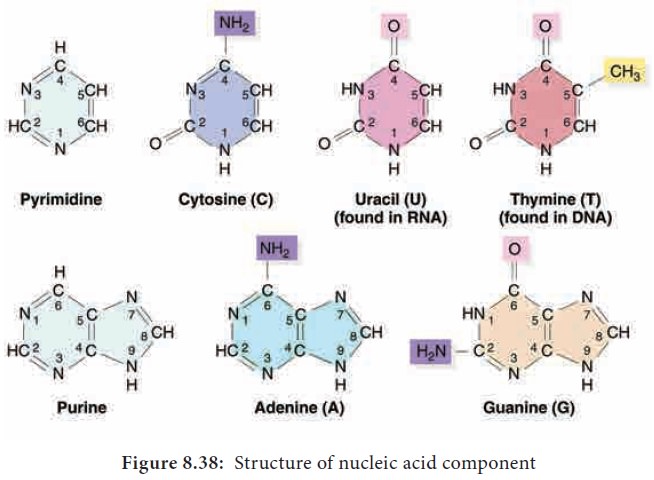 A characteristic feature that differentiates DNA from RNA is that DNA contains nitrogen bases such as Adenine, guanine, thymine (5-methyl uracil) and cytosine and the RNA contains nitrogen bases such as adenine, guanine, cytosine and uracil instead of thymine. The nitrogen base is covalently bonded to the sugar ribose in RNA and to deoxyribose (ribose with one oxygen removed from C2) in DNA. Phosphate group is a derivative of (PO43-) phosphoric acid, and forms phosphodiester linkages with sugar molecule (Figure 8.39). 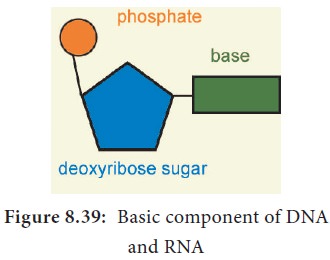 1. Formation of Dinucleotide and Polynucleotide

Two nucleotides join to form dinucleotide that are linked through 3′-5′ phosphodiester linkage by condensation between phosphate groups of one with sugar of other. This is repeated many times to make polynucleotide. 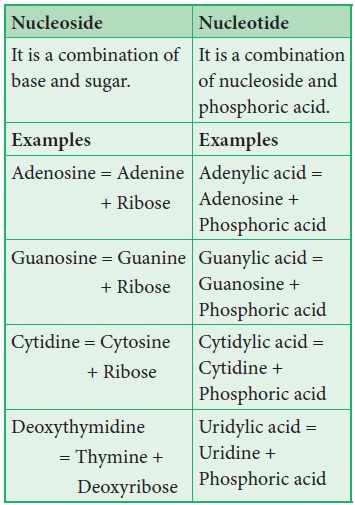 Watson and Crick shared the Nobel Prize in 1962 for their discovery, along with Maurice Wilkins, who had produced the crystallographic data supporting the model. Rosalind Franklin (1920–1958) had earlier produced the first clear crystallographic evidence for a helical structure. James Watson and Francis Crick (Figure 8.40) of Cavendish laboratory in Cambridge built a scale model of double helical structure of DNA which is the most prevalent form of DNA, the B-DNA. This is the secondary structure of DNA. 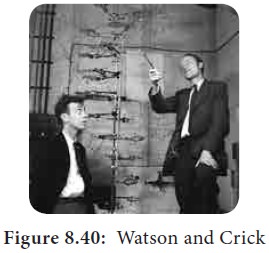 As proposed by James Watson and Francis Crick, DNA consists of right handed double helix with 2 helical polynucleotide chains that are coiled around a common axis to form right handed B form of DNA. The coils are held together by hydrogen bonds which occur between complementary pairs of nitrogenous bases. The sugar is called 2′-deoxyribose because there is no hydroxyl at position 2′. Adenine and thiamine base pairs has two hydrogen bonds while guanine and cytosine base pairs have three hydrogen bonds. 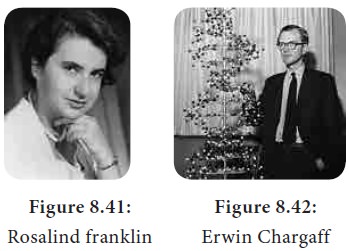 •            The angle at which the two sugars protrude from the base pairs is about 120°, for the narrow angle and 240° for the wide angle. The narrow angle between the sugars generates a minor groove and the large angle on the other edge generates major groove.

•            Thermodynamic stability of the helix and specificity of base pairing includes (i)the hydrogen bonds between the complementary bases of the double helix (ii) stacking interaction between bases tend to stack about each other perpendicular to the direction of helical axis. Electron cloud interactions (∏ – ∏) between the bases in the helical stacks contribute to the stability of the double helix.

•            The phosphodiester linkages gives an inherent polarity to the DNA helix. They form strong covalent bonds, gives the strength and stability to the polynucleotide chain (Figure 8.43). 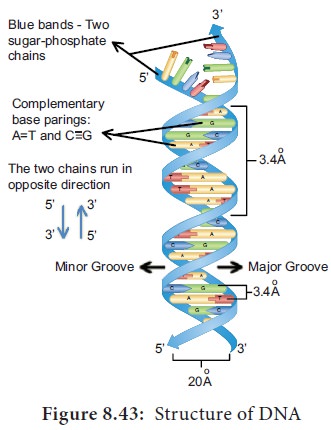 •            Plectonemic coiling - the two strands of the DNA are wrapped around each other in a helix, making it impossible to simply move them apart without breaking the entire structure. Whereas in paranemic coiling the two strands simply lie alongside one another, making them easier to pull apart.

Based on the helix and the distance between each turns, the DNA is of three forms – A DNA, B DNA and Z DNA (Figure 8.43) . 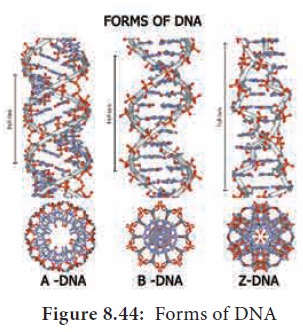 Ribonucleic acid (RNA) is a polymeric molecule essential in various biological roles in coding, decoding, regulation and expression of genes. RNA is single stranded and is unstable when compared to DNA (Figure 8.45). 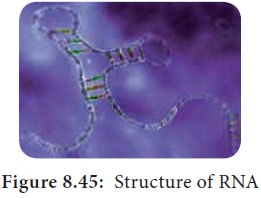 ·           tRNA (transfer RNA): Translates the code from mRNA and transfers amino acids to the ribosome to build proteins. It is highly folded into an elaborate 3D structure and comprises about 15% of total RNA. It is also called as soluble RNA.

·           rRNA (ribosomal RNA): Single stranded, metabolically stable, make up the two subunits of ribosomes. It constitutes 80% of the total RNA. It is a polymer with varied length from 120–3000 nucleotides and gives ribosomes their shape. Genes for rRNA are highly conserved and employed for phylogenetic studies (Figure 8.46).