Enzymes are globular proteins that catalyse the many thousands of metabolic reactions taking place within cells and organism.

Enzymes are globular proteins that catalyse the many thousands of metabolic reactions taking place within cells and organism. The molecules involved in such reactions are metabolites. Metabolism consists of chains and cycles of enzyme-catalysed reactions, such as respiration, photosynthesis, protein synthesis and other pathways. These reactions are classified as

•            anabolic (building up of organic molecules). Synthesis of proteins from amino acids and synthesis of polysaccharides from simple sugars are examples of anabolic reactions. 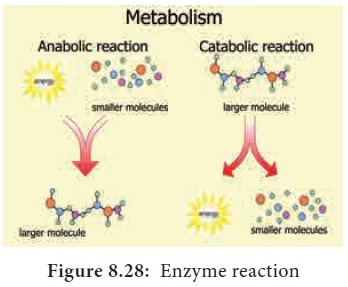 •            Enzymes lower activation energy of the reaction they catalyse.

As molecules react they become unstable, high energy intermediates, but they are in this transition state only momentarily. Energy is required to raise molecules to this transition state and this minimum energy needed is called the activation energy. This could be explained schematically by ‘boulder on hillside’ model of activation energy (Figure 8.29). 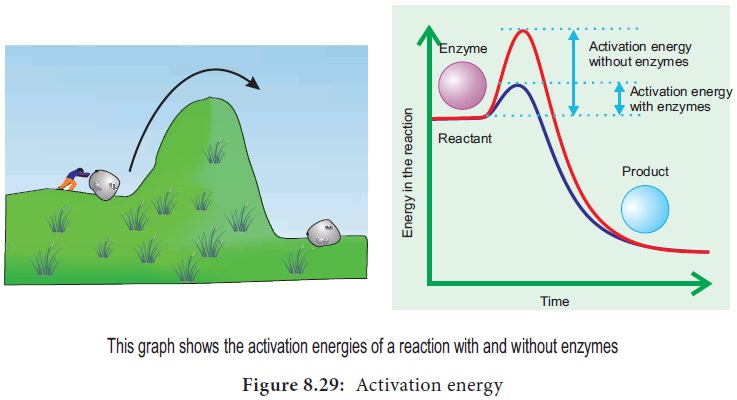 2. Lock and Key Mechanism of Enzyme

In a enzyme catalysed reaction, the starting substance is the substrate. It is converted to the product. The substrate binds to the specially formed pocket in the enzyme – the active site, this is called lock and key mechanism of enzyme action. As the enzyme and substrate form a ES complex, the substrate is raised in energy to a transition state and then breaks down into products plus unchanged enzyme (Figure 8.30). 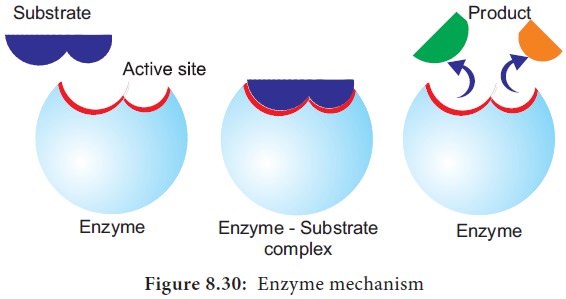 Enzymes are sensitive to environmental condition. It could be affected by temperature, pH, substrate concentration and enzyme concentration.

The rate of enzyme reaction is measured by the amount of substrate changed or amount of product formed, during a period of time.

Heating increases molecular motion. Thus the molecules of the substrate and enzyme move more quickly resulting in a greater probability of occurence of the reaction. The temperature that promotes maximum activity is referred to as optimum temperature (Figure 8.31a). 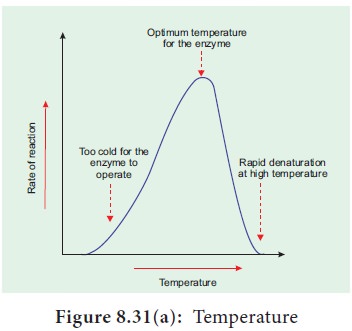 The optimum pH is that at which the maximum rate of reaction occurs. Thus the pH change leads to an alteration of enzyme shape, including the active site. If extremes of pH are encountered by an enzyme, then it will be denatured (Figure 8.31b). 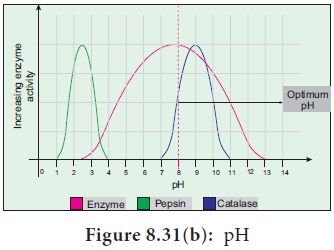 For a given enzyme concentration, the rate of an enzyme reaction increases with increasing substrate concentration (Figure 8.32). 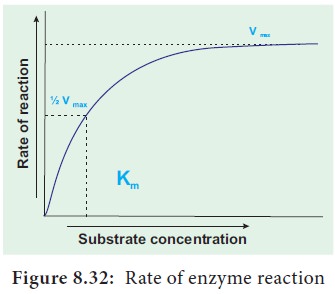 The rate of reaction is directly proportional to the enzyme concentration.

8. Introducing the Michaelis-Menton Constant (Km) and Its Significance

However the rate increases progres-sively, above a certain concentration of the substrate the curve flattened out. No further increase in rate occurs.

Certain substances present in the cells may react with the enzyme and lower the rate of reaction. These substances are called inhibitors. It is of two types competitive and non-competitive (Figure 8.33). 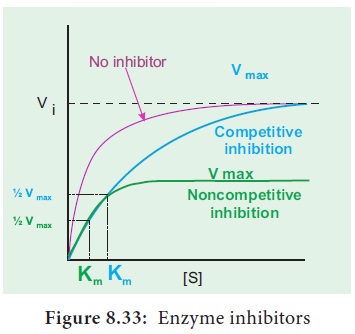 Molecules that resemble the shape of the substrate and may compete to occupy the active site of enzyme are known as competitive inhibitors. For Example: the enzyme that catalyses the reaction between carbon di oxide and the CO2 acceptor molecule in photosynthesis, known as ribulose biphosphate carboxylase oxygenase (RUBISCO) is competitively inhibited by oxygen/carbon-di-oxide in the chloroplast. The competitive inhibitor is malonate for succinic dehydrogenase (Figure 8.34). 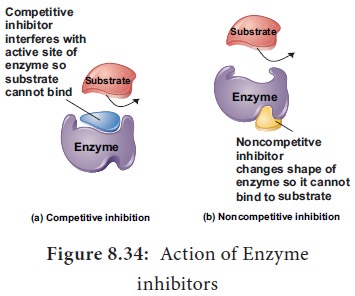 There are certain inhibitors which may be unlike the substrate molecule but still combines with the enzyme. This either blocks the attachment of the substrate to active site or change the shape so that it is unable to accept the substrate. For example the effect of the amino acids alanine on the enzyme pyruvate kinase in the final step of glycolysis.

Certain non-reversible/irreversible inhibitors bind tightly and permanently to an enzyme and destroy its catalytic properties entirely. These could also be termed as poisons . Example – cyanide ions which blocks cytochrome oxidase in terminal oxidation in cell aerobic respiration, the nerve gas sarin blocks a neurotransmitter in synapse transmission.

They modify enzyme activity by causing a reversible change in the structure of the enzyme active site. This in turn affects the ability of the substrate to bind to the enzyme. Such compounds are called allosteric inhibitors. Eg. The enzyme hexokinase which catalysis glucose to glucose-6 phosphate in glycolysis is inhibited by glucose 6 phosphate. This is an example for feedback allosteric inhibitor.

When the end product of a metabolic pathway begins to accumulate, it may act as an allosteric inhibitor of the enzyme controlling the first step of the pathway. Thus the product starts to switch off its own production as it builds up. The process is self – regulatory. As the product is used up, its production is switched on once again. This is called end-product inhibition (Figure 8.35).

•            Inorganic ions help to increase the rate of reaction catalysed by enzymes. Example: Salivary amylase activity is increased in the presence of chloride ions.

•            Prosthetic groups are organic molecules that assist in catalytic function of an enzyme. Flavin adenine dinucleotide (FAD) contains riboflavin (vit B2), the function of which is to accept hydrogen. ‘Haem’ is an iron-containing prosthetic group with an iron atom at its centre.

•            Coenzymes are organic compounds which act as cofactors but do not remain attached to the enzyme. The essential chemical components of many coenzymes are vitamins. Eg. NAD, NADP, Coenzyme A, ATP

Most of the enzymes have a name based on their substrate with the ending –ase. For example lactase hydrolyses lactose and amylase hydrolyses amylose. Other enzymes like renin, trypsin do not depict any relation with their function.

Enzymes are classified into six groups based on their mode of action. 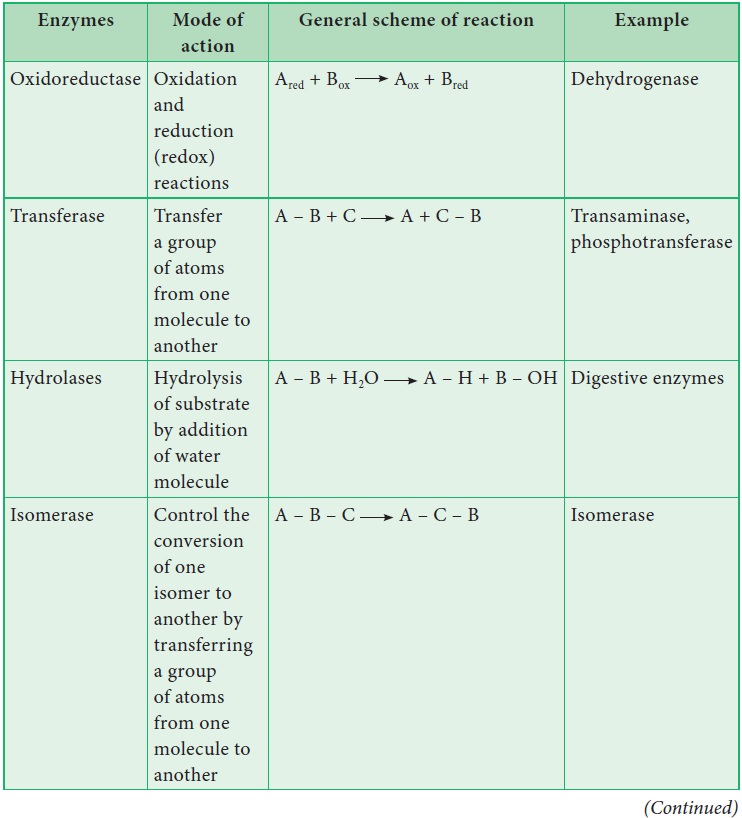 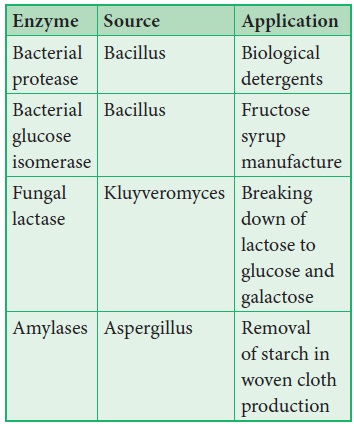