Carbohydrates are organic compounds made of carbon and water.

Carbohydrates are organic compounds made of carbon and water. Thus one molecule of water combines with a carbon atom to form CH 2O and is repeated several (n) times to form (CH2O)n where n is an integer ranging from 3–7. These are also called as saccharides. The common term sugar refers to a simple carbohydrate such as a monosaccharide or disaccharide that tastes sweet are soluble in water (Figure 8.7). 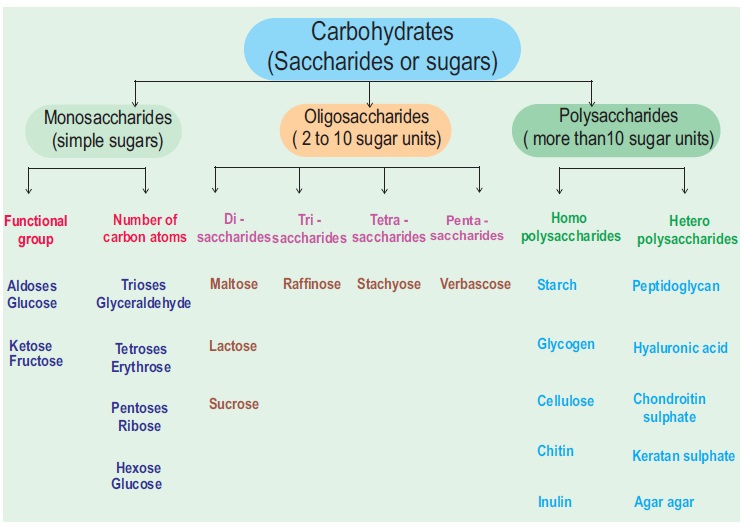 Monosaccharides are relatively small molecules constituting single sugar unit. Glucose has a chemical formula of C6H12O6 . It is a six carbon molecule and hence is called as hexose (Figure 8.6).

This is a condensation reaction releasing water. The bond formed between the glucose and fructose molecule by removal of water is called glycosidic bond. This is another example of strong, covalent bond.

In the reverse process, a disaccharide is digested to the component monosaccharide in a hydrolysis reaction. This reaction involves addition of a water (hydro) molecule and splitting (lysis) of the glycosidic bond.

We test the presence of starch by adding a solution of iodine in potassium iodide. Iodine molecules fit nearly into the starch helix, creating a blue-black colour (Figure 8.9). 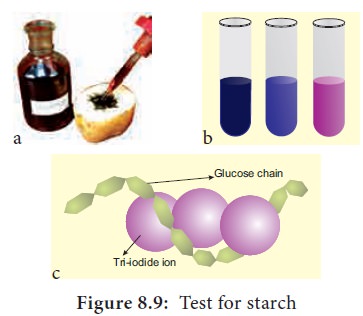 Glycogen is also a storage polysaccharide otherwise called as animal starch. It is the only carbohydrate stored in animals and fungi. Like amylopectin glycogen is a polymer of glucose with (α1-6) linked branches. Glycogen is seen in liver cells, skeletal muscle fibre and throughout the human body except brain (Figure 8.10). 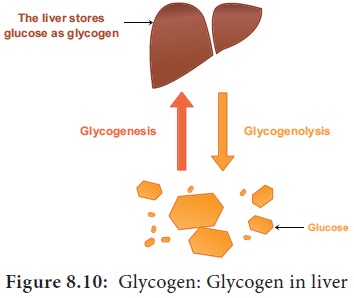 Cellulose is a structural polysaccharide made up of thousands of glucose units. In this case, β-glucose units are held together by 1,4 glycosidic linkage, forming long unbranched chains. Cellulose fibres are straight and uncoiled. It has many industrial uses which include cellulose fibres as cotton, nitrocellulose for explosives, cellulose acetate for fibres of multiple uses and cellophane for packing (Figure 8.11). 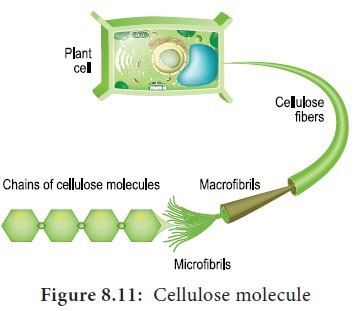 Most herbivores have a problem:

➢      Cellulose is one of the most abundant organic compound in the biosphere.

Chitin is a homo polysaccharide with amino acids added to form mucopolysaccharide. The basic unit is a nitrogen containing glucose derivative known as N-acetyl glucosamine. It forms the exoskeleton of insects and other arthropods. It is also present in the cell walls of fungi (Figure 8.12). 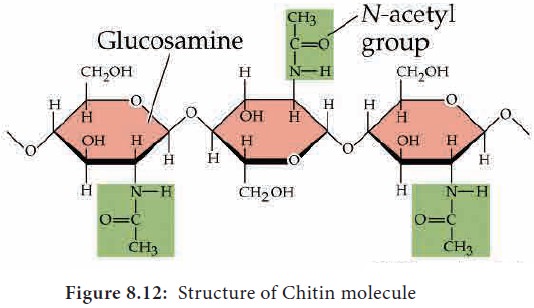 Aldoses and ketoses are reducing sugars. This means that, when heated with an alkaline solution of copper (II) sulphate (a blue solution called benedict’s solution), the aldehyde or ketone group reduces Cu2+ ions to Cu+ ions forming brick red precipitate of copper(I) oxide. In the process, the aldehyde or ketone group is oxidised to a carboxyl group (–COOH). This reaction is used as test for reducing sugar and is known as Benedict’s test. The results of benedict’s test depends on concentration of the sugar. If there is no reducing sugar it remains blue (Figure 8.14). 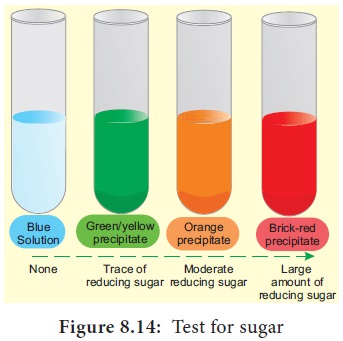 •            The greater the concentration of reducing sugar, the more is the precipitate formed and greater is the colour change. 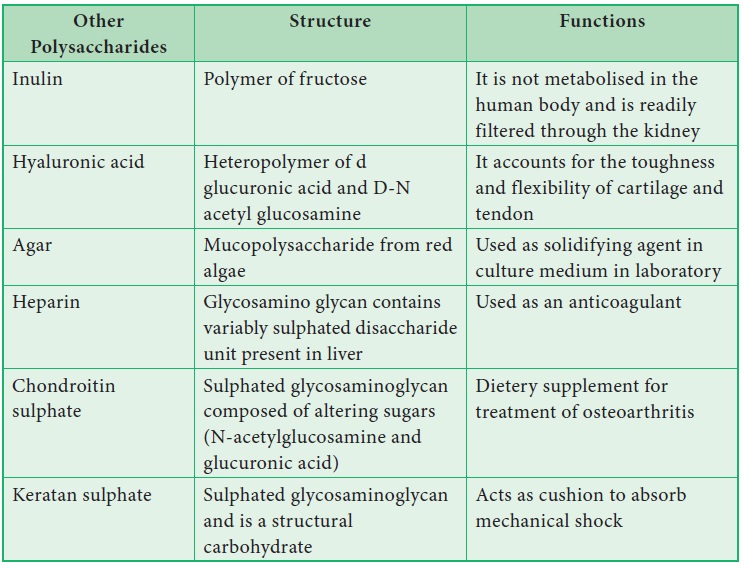