Labour is the process resulting from uterine contraction leading to expulsion of products of conception from the uterine cavity through vagina.

Labour is the process resulting from uterine contraction leading to expulsion of products of conception from the uterine cavity through vagina.

Labour is called normal when it satisfies the following criteria

·  No complication to the mother and baby

Causes of onset of labour

·  The exact mechanisms are not known. The theories are,

·  Hypoxia of the contracted myometrium.

·  Compression of nerve ganglia in the cervix and lower uterus by the tightly interlocking muscle bundles.

·  Stretching of the cervix during dilatation.

·  Stretching of the peritoneum overlying the uterus. 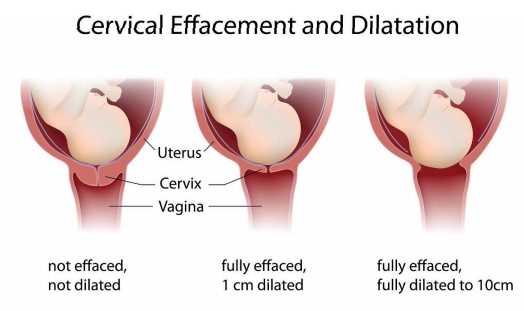 Effacement of the cervix: it is the shortening of the cervix. The cervix is pulled up and become a part of the uterine segment. Effacement is expressed as ranging from 0% (no reduction in length) to 100% palpable below the fetal presenting part.

Dilatation of cervix: cervix dilates to a maximum of 10 cm to enable the head to pass through the cervix.

·  Starts over the back (sacrum) radiates to lower abdomen and thigh.

·  Gradually the intensity, duration and frequency of contraction increases.

·  Pain is associated with uterine contraction.

·  Pain is not relieved by enema.

Show: Blood stained mucus discharge per vagina due to separation of the cervical mucus plug.

Stages and Phases Of Labour

First stage: The first stage of labour is the interval between the onset of true pain and full cervical dilatation. Duration is 6-12 hours. The first stage is further divided into a latent and an active phase.

The latent phase extends from the onset of labour till 3 – 4cm dilatation. During this phase, uterine contraction are mild and irregular. They become intense, frequent and regular as the latent phase progress.

The active phase is characterized by increased rate of cervical dilatation.

Second stage: The duration of the 2nd stage averages 2 hours for primi and 30 minutes for multiparaThe 2nd stage of labour is the interval between full cervical dilatation to delivery of the baby.

Diagnosis of second stage of labour:

·  Bulging of the perineum and gapping of the anus.

·  Full dilatation of the cervix.

Fourth stage: The 4th stage is the stage of observation for atleast one hour after the expulsion of the placenta and membranes.

Definition: A Series of movements adapted by fetus in the birth passage during expulsion.

·  Passenger – size of the baby

When the greatest diameter of the presenting part (biparietal diameter in vertex) has passed the plane of the pelvic brim, the head is said to be engaged.It occurs in late pregnancy (primi) or at the time of labour (multi).

·  The head must rotate to anterior (or posterior) to pass ischial spines.

·  After internal rotation and further descent, vulva form a crown around the head (i.e.) the biparietal diameter distends the valval outlet without any recession of the head even after contraction is over.

·  Distension of perineum by vertex.

·  Occiput beyond symphysis &Head stands out.

·  Untwisting of the neck, head rotates to the position occupied at engagement.

·  Shoulder descends in the path similar to that followed by the head and rotates anteroposteriorly. 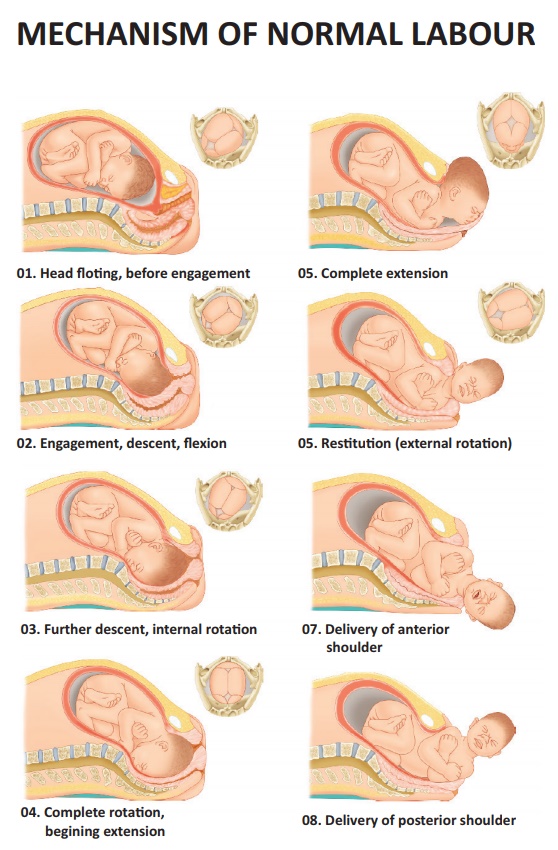