Uterus- The uterus which in non-pregnant state, weighs about 60 gm, during pregnancy uterus increases in size upto 10-12kgs.

Cervix- Softening of the cervix is evident at 6 weeks. It occurs due to fluid accumulation inside the fibros tissue of the cervix and increased vascularity. 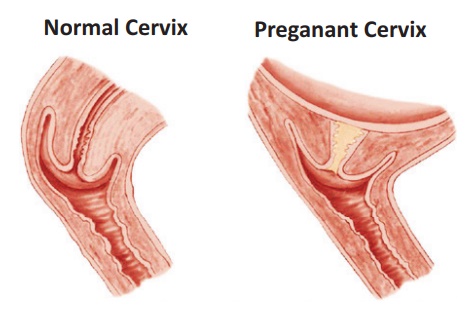 Ovary- Both the ovarian and uterine cycles of the normal menstruation remain suspended.

In early pregnancy the women feel fullness of breast or tingle and increase in size as pregnancy progresses. The areola of the nipples darkens and the diameter increases. The Montgomery’s glands (the sebaceous glands of the areola) enlarge and tend to protrude. The surface vessels of the breast may become visible due to increased circulation. By the 16th week (2nd trimester) the breasts begins to produce colostrum. It is a thin, watery, yellowish secretion which thickens as pregnancy progresses. Colostrum may leak from breasts. 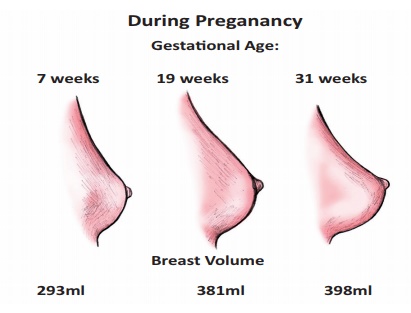 Face- There is an extreme form of pigmentation present around the cheeck, forehead and around the eyes. It is called as chloasma gravidarum or pregnancy mask.

Abdomen- A brownish black pigmented line appears on the abdomen stretching from the Xiphisternum to the symphysis pubis. It will disappear after delivery (Linea Nigra).

Striae gravidarum-It is a specific form of scarring of the abdominal skin area due to rapid expansion of the uterus. It looks pinkish in first pregnancy, in subsequent pregnancy both pinkish and white striae are visible (Striae albican). 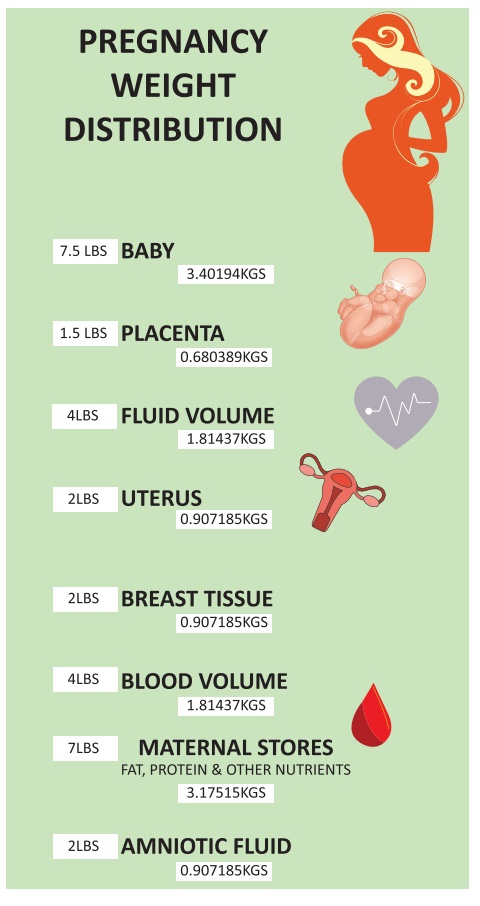 The total weight gain during the course of a singleton pregnancy for a healthy woman averages 11kg. 1kg in first trimester (1-3 months). 5 kg each in second (4-6 months) and third trimester (7-9 months).

Ideally the weight gain depends on pre-pregnancy body mass index (BMI) level. Weight gain for a woman with normal BMI (20-26) is 11 to 16kg. An obese woman (BMI>29) should not gain more than 7 kg. Where as an underweight woman (BMI<19) may be allowed to gain upto 18kg.

·  Accumulation of fat and protein 3.5 kg

The heart enlarges by 70 to 80ml due to small increase in wall thickness and venous filling. Cardiac output increases from 4.5 - 6.0 litre/min. Heart rate increases from 70bpm in non-pregnant state to 78bpm at 20 weeks gestation and a peak around 85 bpm in late pregnancy.

·  Glomerular filtration rate (GFR) is increased by 50% all throughout pregnancy. Frequency of micturation is a common symptom of early pregnancy. This is due to changes in pelvic anatomy. A degree of hydronephrosis and hydroureter exist. These result from the loss of smooth muscle tone due to the progesterone, aggravated by mechanical pressure from the ureters at the pelvic brim.

·  Glycosuria of mild degree in 35% to 50% of all pregnant woman. Increased glomerular filtration leads to more sugar reaching the tubules that can be reabsorbed.

·  The gums become congested and spongy and may bleed to touch.

·  There may be generalised neuritis probably due to Vitamin B1 (Thiamine) deficiency.

·  Compression of the median nerve underneath the carpal ligament over the wrist joint, leading to pain in the hands and arm called CARPAL TUNNEL SYNDROME may appear in late pregnancy.

Nausea, vomiting, mental irritability and sleeplessness due to some psychological background.