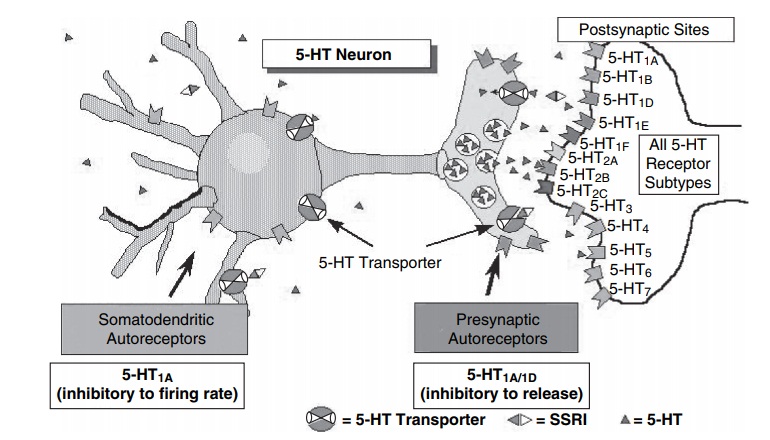 Like serotonergic neurons, noradrenergic neurons are anatom-ically restricted, with the majority (.70%) found in the nu-cleus locus coeruleus.

Like serotonergic neurons, noradrenergic neurons are anatom-ically restricted, with the majority (.70%) found in the nu-cleus locus coeruleus. Noradrenergic neurons also possess an extensively ramified system of efferent projections, diffusely innervating brain regions (e.g., cortex, amygdala, hippocam-pus, hypothalamus) associated with anxiety disorders. From a historical perspective, the evidence linking norepinephrine (and by implication, the recognition sites subserving this trans-mitter) to anxiety disorders clearly predates (Blaschko, 1972). The ability of stress to impact brain norepinephrine levels has been known for almost 40 years (e.g., Barchas and Freedman, 1963; Maynert and Levi, 1964). A wide range of stressors have been reported to increase norepinephrine turnover in the CNS (Stone, 1975; Tilson et al., 1975). This activation of noradrenergic neurons by stress can be attenuated by benzodiazepines (Taylor and Laverty, 1973; Ida et al., 1985).

The locus coeruleus sends projections to many fore-brain areas associated with fear and anxiety via the dorsal noradrenergic bundle. Redmond and his colleagues (Red-mond and Huang, 1979) provided perhaps the most com-pelling preclinical data linking noradrenergic pathways to anxiety disorders. Thus, it was demonstrated that electrical stimulation of the locus coeruleus in monkeys produced fear-like behaviors, and that “symptom’’ severity appeared depen-dent on the strength of the applied stimulus. Bilateral ablation of the locus coeruleus blunted the behavioral responses of animals to threatening environmental stimuli (Redmond and Huang, 1979). Pharmacological studies in humans have also implicated noradrenergic pathways in some of the anxiety disorders.

A variety of clinical and preclinical findings indicate that physiological or pharmacological activation of noradrenergic pathways mimics or exacerbates anxiety. At face value, these findings are at odds with the reported efficacy of TCAs and MAOIs in anxiety disorders (Hoehn-Saric, 2000; Buller and Jorga, 2000). In a broad sense, this body of evidence parallels the apparent contradictory findings that increasing serotonergic transmission is associated with anxiety, yet drugs whose primary neurochemical action (e.g., SSRIs) results in increased synaptic concentrations of serotonin are useful in the treatment of anxiety disorders.

Future studies on potential targets downstream of the monoaminergic synapse (e.g., Rossby and Sulser, 1997) (Figure 12.5) may result in a better understanding of the antianxi-ety actions of these compounds and the neurochemical substrates of anxiety. 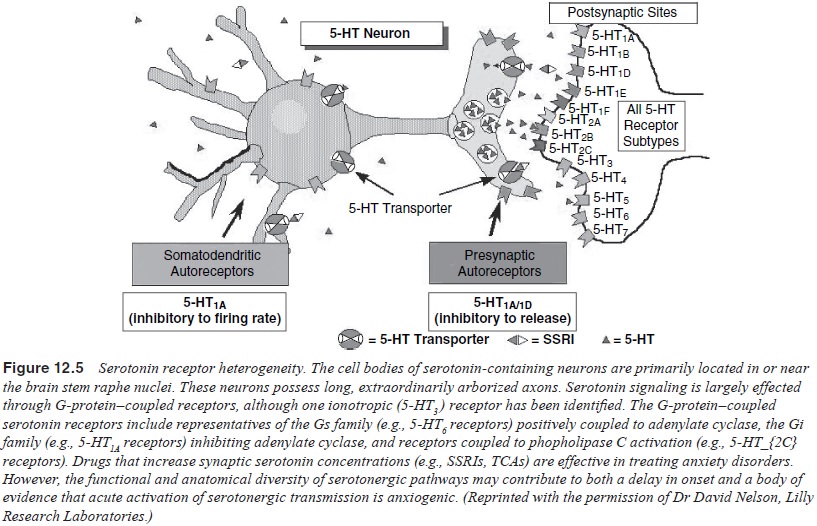