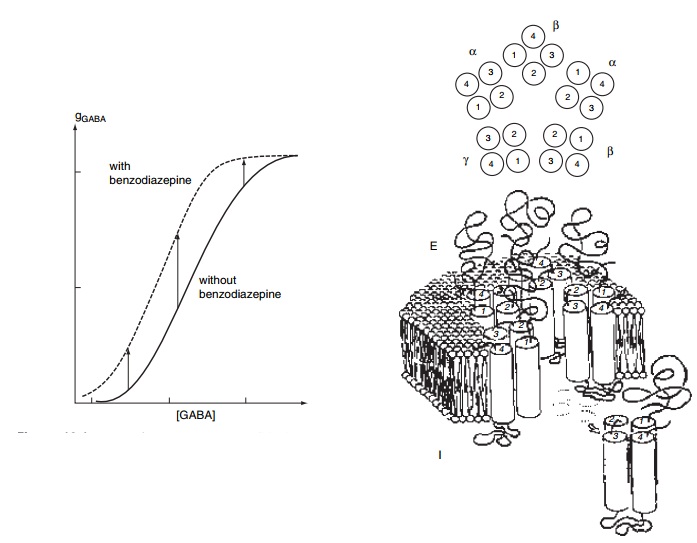 GABA is the principal inhibitory transmitter in the vertebrate central nervous system, with about one-third of all synapses using GABA as a transmitter.

GABA is the principal inhibitory transmitter in the vertebrate central nervous system, with about one-third of all synapses using GABA as a transmitter. Fifteen years after their introduction into clinical practice, benzodiazepines were shown to augment the actions of GABA (Haefely and Polc, 1986). A compelling body of evidence indicates that augmentation of GABAergic transmission mediates the principal pharmacological actions of the benzodiazepines. The efficacy of benzodiazepines in the treatment of anxiety disorders (including GAD, PD and socialphobia) has been well documented by double-blind, placebo-con-trolled studies (Ballenger, 1999; Blanco et al., 2002).

From a cellular perspective, benzodiazepines act as allo-steric modulators, increasing the apparent affinity of GABA at GABAA receptors (Figure 12.1). By binding to a specific subset of amino acids on the N-terminal of the GABAA receptor alpha and gamma subunits (Wong et al., 1992; Tretter et al., 1997), ben-zodiazepines (and structurally unrelated compounds that bind to overlapping sequences on these subunits) effect this increase in the apparent affinity of GABA to its recognition site (Haefely and Polc, 1986). 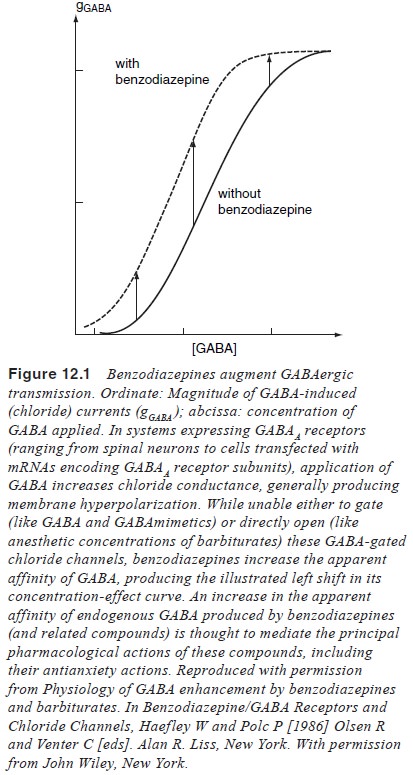 Despite the evidence that benzodiazepines and other strategies directed at augmenting GABAergic transmission are effective in the treatment of anxiety disorders, this evidence does not directly implicate GABAA receptors in their pathophysiol-ogy. Nonetheless, convergent pharmacological and physiologi-cal evidence are consistent with the hypothesis that GABAergic pathways are intimately involved in the behavioral, somatic and endocrine manifestations of anxiety.

There are two principal lines of pharmacological evidence implicating GABAergic pathways in anxiety. The first involves the demonstration that so-called benzodiazepine receptor inverse agonists produce a constellation of actions (behavioral, somatic and endocrine) reminiscent of anxiety in rodents and primates, including man. Recall that the principal cellular action of ben-zodiazepines is to increase the apparent affinity of GABA at GABAA receptors, manifested as a left shift of the GABA con-centration effect curve (Figure 12.2).

The second line of pharmacological evidence linking GABAA receptor dysfunction to anxiety disorders stems from reports that flumazenil is panicogenic in PD patients but not in control subjects (Nutt et al., 1990; Woods et al., 1991). It can be hypothesized that flumazenil acts as a GABA negative (inverse agonist) compound in some subsets of PD patients with an atypical GABAA receptor composition in circumscribed areas of the central nervous system (CNS). While there is no direct evidence to support this hypothesis, positron emission tomography (PET) studies have demonstrated a global reduction in the binding of 11C flumazenil throughout the brain in patients with PD compared with controls.

Findings from multiple lines of research indicate that GABAA receptors may have evolutionary significance as a bio-warning system and perhaps as a means of compensating for perturbations in the environment. If stress-induced activation of GABAA receptors (manifested in these studies as increases in TBPS binding) is an attempt to compensate for environ-mental perturbations, then benzodiazepines (and low doses of barbiturates which increase the frequency of channel opening) (Study and Barker, 1981) may be viewed as pharmacological mimicry of the organism’s initial attempts to cope with the dis-ruption of its environment.