Constitutive nonspecific defense mechanisms play a most important role as a first line of defense, preventing penetration of microorganisms beyond the outer exposed surfaces of the body.

Constitutive nonspecific defense mechanisms play a most important role as a first line of defense, preventing penetration of microorganisms beyond the outer exposed surfaces of the body. Physical and chemical barrier mechanisms that play a significant role in protect-ing the organism from infectious agents include:

5.           The production of defensins by mucosal and phagocytic cells

All these are examples of innate anti-infectious defense mechanisms. The importance of these barriers is apparent from the prevalence of infections when their integrity is compromised.

The existence of natural antibacterial compounds, such has lysozyme and defensins, has been the object of considerable attention. Lysozyme breaks the β,1–4 linkages of pep-tidoglycan, but its effectiveness is somewhat limited by the fact that bacterial capsules of-ten limit the access of the enzyme to its substrate. Defensins, are antimicrobial peptides released by specialized mucosal cells (the Paneth cells in the gut) and by phagocytic cells. The mucosal defensins are believed to play an im-portant role in protecting mucosal cells from pathogenic bacteria. The neutrophil defensins are packaged on the azurophilic granules and are delivered to the phagosomes and also spilled into the extracellular environment. Mammalian defensins are grouped into two fam-ilies: α and β. β Defensins in have been shown to have chemotactic properties for imma-ture dendritic cells and T lymphocytes and in this way may play a significant role in pro-moting the onset of the immune response.

These responses, including fever and release of class I interferons ( α and β), are activated when infectious agents manage to invade, and they are particularly effective in preventing viral replication. The main cells that produce and release interferon-α have been identified as precursors of dendritic cells, which, play a key role in the inducing stages of the immune response.

1.           CR1 and CR3 receptors, able to interact with C3b and iC3b on the microbial membrane, generated as a consequence of complement activation by the alter-native pathway, a property common to many bacteria . 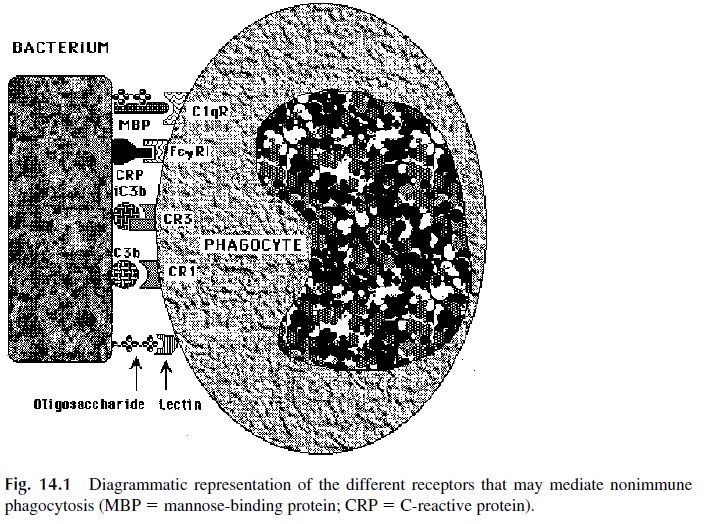 2.           Mannose receptors, able to mediate ingestion of organisms with mannose-rich polysaccharides, such as Candida albicans. Mannose-mediated phagocytosis is amplified by a mannose-binding protein that promotes phagocytosis through complement activation and direct interaction with the C1q (collectin) receptor on phagocytic cells.

3.           C-reactive protein binds to certain bacterial polysaccharides and has effects very similar to those of the mannose-binding protein—activating complement and promoting phagocytosis, both through CR1 and CR3, as well as by other recep-tors, including the FcγRI and the C1q receptor, both of which bind this protein.

D. Activation of the Complement System Via the Alternative Pathway

A variety of microorganisms (bacteria, fungi, viruses, and parasites; see Table 14.1) can ac-tivate complement by the alternative pathway. In most cases where adequate studies have been carried out, polysaccharidic structures have been proven to be responsible for complement activation of the alternative pathway. This activation will lead to phagocytosis through the generation of C3b and to chemotaxis through the release of C3a. 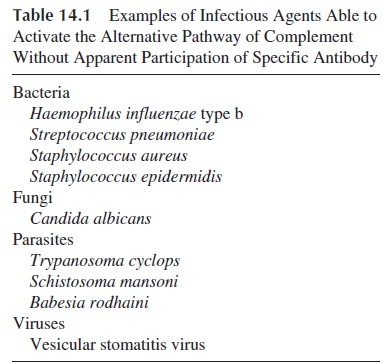 The initial recognition by phagocytes and the activation of the complement system by the alternative pathway by themselves may not be sufficient to eradicate the invading mi-croorganism. However, the antimicrobial response is significantly amplified by a multitude of cytokines released by macrophages activated as a consequence of phagocytosis, includ-ing IL-1, IL-6, IL-8, IL-12, and TNF.

1.           IL-1 and TNF cause an increase body temperature, mobilize neutrophils from the bone marrow, and upregulate the synthesis of a variety of proteins known as acute phase reactants, including C-reactive protein and the mannose-binding protein mentioned above.

2.           IL-1 and TNF also upregulate the expression of cell adhesion molecules in the en-dothelial cells of neighboring endothelial cells, thus promoting adherence of leukocytes, and increase vascular permeability. Both factors facilitate the migra-tion of leukocytes off the vessels, towards the focus of infection.

3.           IL-8 has chemotactic properties. Together with other chemotactic factors, such as C5a and bacterial peptides, it attracts neutrophils towards the focus of infection.

4.           IL-12, in conjunction with nitric oxide, stimulates the cytotoxic activity of natu- ral killer cells, enhancing their release of interferon-γ . Interferon-γ and IL-12 have also an important role in promoting TH1 lymphocyte differentiation.

Natural killer (NK) cells are able to destroy virus infected cells as a consequence of the de-livery of an activating signal in the absence of an inhibitory signal . The inhibiting signal is usually delivered as a consequence of the interaction between a mem-brane protein in the NK cell membrane and MHC-I molecules on the membrane of normal cells. Virus-infected cells often have a reduced expression of MHC-I molecules due either to a downregulation of cellular protein synthesis or a specific inhibition of MHC-I trans-port to the cell membrane. This renders these cells more susceptible to attack by NK cells.

These are predominantly found in the mucosal epithelia and appear to recognize infected epithelial cells by a nonimmunological mechanism (i.e., not involving the T-cell receptors), resulting in their elimination.