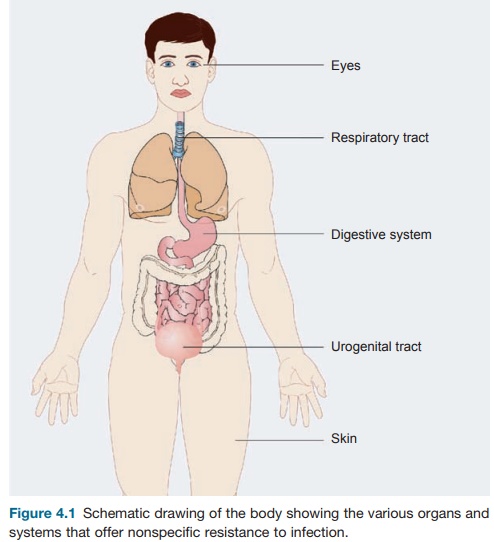 Nonspecific or natural resistance refers to barriers, secretions, and normal flora that make up our external defenses.

Nonspecific or natural resistance refers to barriers, secretions, and normal flora that make up our external defenses. Phago-cytes and complement are also involved. Mechanical barriers are highly effective, and the skin (our largest organ) is highly suited to this protection (see Figure 4.1); loss of a major part of the skin (second-ary to burns, acids, etc.) immediately exposes the host to marked susceptibility to infection. The mucosal lining of mouth and respiratory tract is another excellent defense mechanism. Yet, a defect in the mucosal lining of the respiratory tract, which occurs in cystic fibrosis, results in a heightened susceptibility to many infec-tions. These are examples of a defect in the epithelium or epithelial lining. In gen-eral, however, it is the mobilization of the phagocytic cells such as monocytes/mac- rophages and polymorphonuclear leuko-cytes that ingest invading microorganisms and kill them.

The polymorpholeukocytes are a large pool of phagocytic cells that are both cir-culatory and in the bone marrow. Invad-ing organisms trigger an inflammatory cascade, which stimulates these cells to adhere to vascular epithelium and actively migrate toward the infection. Phagocytosis is promoted by opsonins (usually IgG anti-body) and complement.

Most pathogenic microorganisms have evolved methods of resisting phagocy-tosis. For example, group A streptococci have cell surface structures called M pro-teins of which there are now more than 120 antigenically distinct molecules that 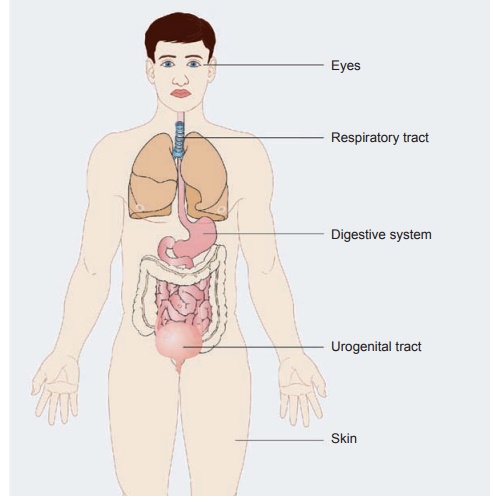 Figure 4.1 Schematic drawing of the body showing the various organs and systems that offer nonspecific resistance to infection.

inhibit direct phagocytosis, mainly by preventing deposition of complement on the organism. Another example is the pneumococcal polysaccharide capsule of which there are thirty to forty distinct polysaccharides. Another approach (taken by both group A streptococci and staphy-lococci) is the release of potent extracel-lular toxins, which kill phagocytes with the formation of pus. An intriguing bac-terium, Mycobacterium tuberculosis, can be ingested by phagocytes but resists intra-cellular killing, often persisting for years in the macrophage.

Over the past decade, our knowledge of how we sense the microbial world (innate or adaptive) has fundamentally changed. It has been known for decades that microbial products such as lipopolysaccharides, lipoproteins or peptidogly-cans have profound effects on human cells.

Although the structures of many dif-ferent pathogenic microbial compounds have been extensively studied, the molec-ular basis of their recognition by the cells of the innate immune system remained elusive. Charles Janeway first developed the concept of microbial structures forming pathogen-associated molecular patterns (PAMPs), which would be recognized by pattern recognition receptors. The discovery of a family of toll receptors (toll refers to the toll gene of Drosophila, initially identified as an essential receptor controlling dorsoventral polarization during embryonic development of the fly lar-vae) in species as diverse as Drosophila fly and humans and the recognition of their role in distinguishing molecular patterns that are common to microorganisms led to a renewed appreciation of the innate immune system.

From these humble beginnings, the field of mammalian toll-like receptors (TLR) quickly evolved as a crucial sys-tem for alerting the host to the presence of numerous infectious agents. Infectious microbes display certain molecular pat-terns that are necessary for microbial virulence (see Table 4.1). Many of these molecular patterns such as lipopolysaccha-ride in the outer membranes of gram-nega-tive bacteria seem to be particularly potent activators of mammalian cells. The mam-malian receptors responsible for recogni-tion of PAMPs are called pattern recognition receptors. The failure of the immune system to recognize a pathogen’s PAMP could lead to a delay or blunting of the immune response, resulting in unchecked invasion by the microbe. 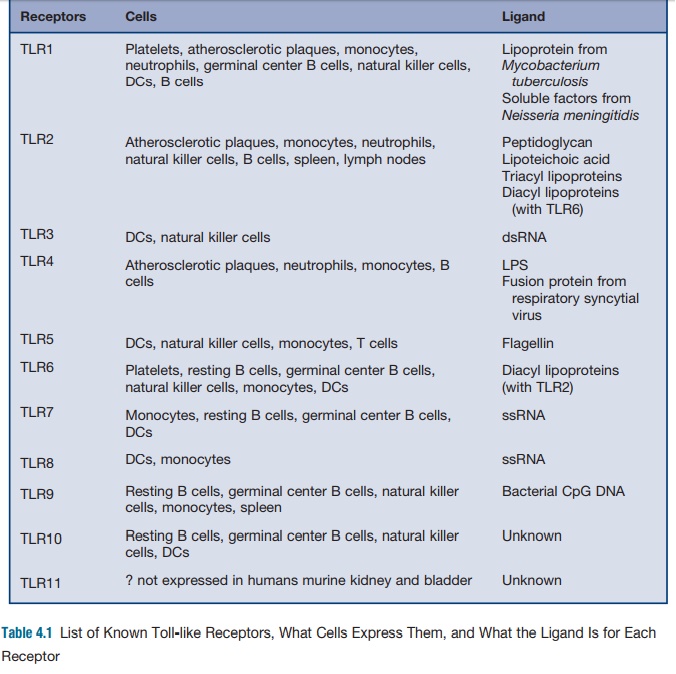 Perhaps the best example of an incom-plete recognition by the TLR system is a gram-negative bacterial infection in the C3H/HeJ mouse. As few as two colony-forming units of Salmonella typhimurium can kill this mouse. Further exploration of this extraordinary virulence revealed that the mouse harbored a point mutation (P712H) in the TLR4, which results in defective sig-nal transduction in response to LPS and a heightened susceptibility to gram-negative infections.

The family of TLRs is a highly special-ized system that can identify a number of microbial and endogenous ligands and acti-vate the immune system to respond. The body must be able to respond differently to various challenges. Thus, the specificity in the immune response via TLRs is becoming increasingly complex. Currently, probes of the TLR family have been described, and it is expected that many more receptors will be discovered in the future.