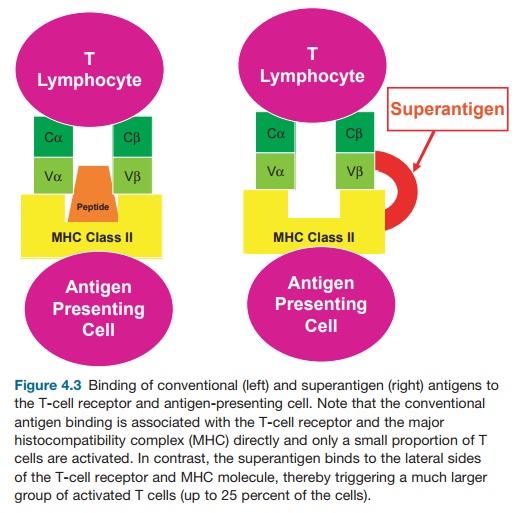 Among the toxins secreted by bacteria is a special group from the streptococcal and staphylococcal family of toxins called superantigens (SAg).

Among the toxins secreted by bacteria is a special group from the streptococcal and staphylococcal family of toxins called superantigens (SAg). Instead of binding to the specific antigen receptor known for most antigens, these toxins bind to the lateral surface of both the T-cell receptor and the MHC (see Figure 4.3). Thus, in contrast to a conventional peptide anti-gen, which stimulates only one in 104 to 108 T cells, the superantigen may bind up to approximately 1:50 T cells. The result is a veritable explosion of cytokines result-ing in high fever, hypotension, and mul-tiorgan shock. Death often occurs within 24 hours of the release of these toxins. The most widely studied superantigens are produced by Staphylococcus aureus and group A streptococcus. These supe-rantigens bind the T-cell receptor at its β region, and that exact Vβ region is dif-ferent for each superantigen. Table 4.2 lists the known superantigens and their Vβ specificities.

The role of SAg has also been explored in a number of disease states, including atopic dermatitis, psoriasis, Kawasaki disease, rheumatic fever, and tuberculosis. 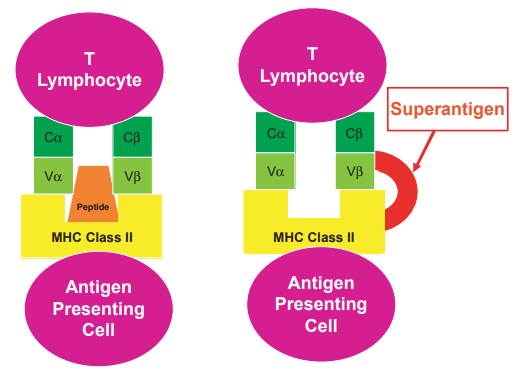