Nomenclature and Classification of Enzymes

Nomenclature and Classification of Enzymes:

In early days the suffix – ase was added to the substrate for naming the enzymes.

These names are known as trivial names. They do not convey complete information about the enzymatic reaction.

The International Union of Biochemistry and Molecular Biology (IUBMB) have assigned a systematic nomenclature for enzymes. The systematic name has two parts.

·     The first part represents the substrate. In enzyme catalyzed reactions the reactants are known as substrates.

·     The second part, ending in –ase, indicates the type of reaction catalysed.

·     The first digit represents the major class to which the enzyme belongs.

·     The second digit denotes the subclass.

·     The third digit denotes the sub-sub class of the enzyme within the major class.

·     The fourth digit represents the serial number of the enzyme within the sub-sub class. 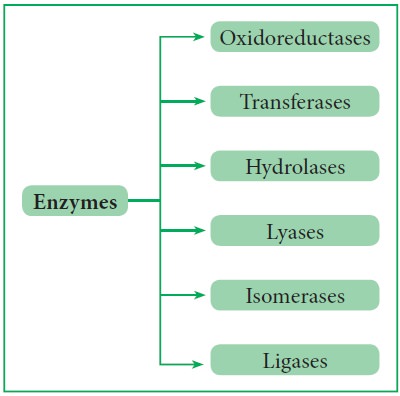 These are enzymes which catalyze the oxidation – reduction reactions between two substrates.

This enzyme oxidizes ethanol into acetaldehyde. It requires the coenzyme NAD+ (Niacinamide Adenine Dinucleotide) which gets reduced to NADH.

These are enzymes which catalyze the transfer of certain groups such as phosphate, amino or acetyl groups from one substrate to another.

These enzymes catalyze the addition or elimination of groups like H2O, CO2, and NH3 etc. Example: Aldolase, decarboxylase

It catalyzes the reversible conversion of fructose-1,6-bisphosphate to glyceraldehyde-3-phosphate and dihydroxyacetone phosphate by aldol cleavage of the C3–C4 bond.

These enzymes catalyze the inter-conversion of isomers such as optical, geometrical or positional isomers.

This enzyme catalyzes the isomerization of glyceraldehyde-3-phosphate into dihydroxy acetone phosphate.

These enzymes catalyze the synthetic reactions. They link two substrates together with the utilization of ATP or GTP.

This is a ligase which catalyzes the synthesis of glutamine from glutamate and NH3. 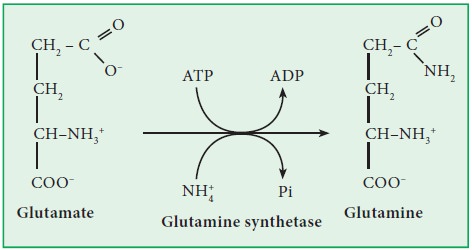