1. Change in hydrogen ion concentration influences the enzyme activity. When the velocity is plotted against pH, a bell shaped curve is obtained.

2. The pH at which the enzymatic reaction has maximum velocity is known as optimum pH. Most of the enzymes possess optimum pH between 5 and 9. However there are exceptions like pepsin, alkaline phosphatase etc. 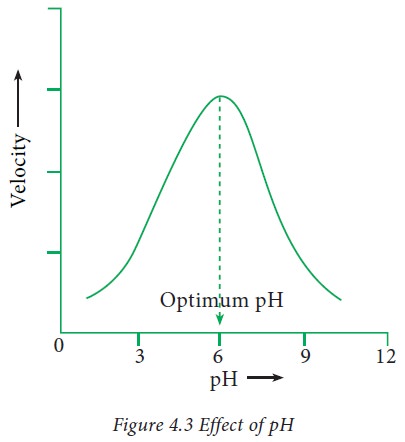 3. The optimum pH of some of the common enzymes are as follows:

4. Enzymes possess only low activity or even become inactive at extreme pH values.

This is due to the following reasons;

·     The hydrogen ion concentration affects the ionic charges on the active site of the enzyme.

·     Thus the extreme pH values lower the effective concentration of active form of enzyme and substrate. Therefore, the reaction velocity will be lowered.

2. Effect of temperature on enzyme acitivity:

Velocity of an enzyme reaction increases with increase in temperature upto a maximum and then declines.

When the velocity is plotted against temperature we obtain a plot as shown in the figure 3.4.

The temperature at which the enzymatic reaction has maximum velocity is known as optimum temperature. 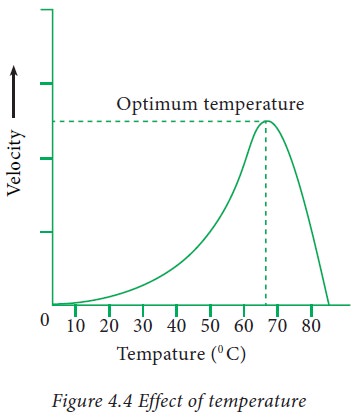 The optimum temperature of some of the common enzymes are as follows:

But enzymes like venom phosphokinase, muscle adenylate kinase are active even at 1000C.

In general, at high temperatures the enzymes undergo denaturation and this leads to the rapid loss of catalytic activity.

Formation of an enzyme-substrate complex (ES complex) is the first step in enzyme catalysis. Increase in the substrate concentration gradually increases the velocity of enzymatic reaction up to a particular value. 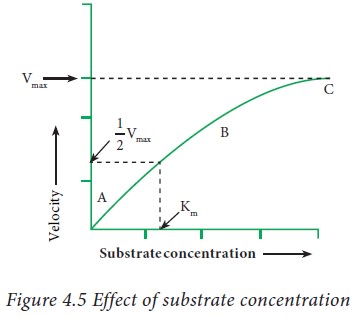 A hyperbolic curve is obtained when velocity is plotted against the substrate concentration. This graph shows three distinct phases.

·     In the first phase (A), the velocity of the reaction is directly proportional to the substrate concentration.

·     In the second phase (B), the substrate concentration is not directly proportional to the enzyme activity.

·     In the third phase (C), the velocity remains constant and does not change with increase in the substrate concentration. (plateau) 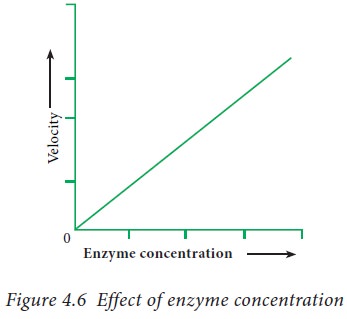 Activators are the inorganic ions (cations or anions) or compounds that enhances the activity of the enzymes.

Metal ions can be bound to the enzyme permanently or can be used just for activation. When metal ions used only for the activation of enzyme, they are called metal activated enzymes.

If metal ions are bound with enzymes using chemical bond, they are called metalloenzymes.

Time, radiations and co-enzymes are also the other factors which affect the velocity of an enzyme reaction.