By 1941 the United States and Britain began to give serious consideration to the need for international cooperation for achieving lasting peace among all nations. International economic and financial stability were also important objectives.

By 1941 the United States and Britain began to give serious consideration to the need for international cooperation for achieving lasting peace among all nations. International economic and financial stability were also important objectives. All these would need international organizations with members of the various nations across the world working together for these common objectives. This ultimately resulted in the establishment of the United Nations, the World Bank and the International Monetary Fund, with many associated organizations which deal with basic issues of importance for all societies and countries. 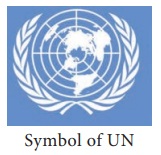 "We, the peoples of the United Nations, determined to save succeeding generations from scourge of war, which twice in our lifetime has brought untold sorrow to mankind, and to reaffirm faith in fundamental human rights, in the dignity and worth of the human person, in the equal rights of men and women, and of nations large and small …”. - from The Preamble to the United Nations

The United Nations functions almost like any government, through its principal organs which are similar to the legislative, executive and judicial wings of a state. 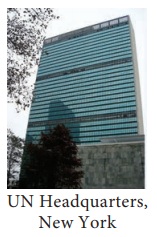 In the General Assembly is the body in which each member state is represented. It meets once a year and issues of interest and points of conflict are discussed in the Assembly. The Security Council has fifteen members. Five countries - the United States, Britain, France, Russia and China - are permanent members, and there are ten temporary members who are elected in rotation. These two bodies function like a legislature. Each of the permanent members has the right to veto any decision by the other members of the Security Council. This right has often been used to block major decisions, especially by the superpowers, the US and Russia. Major issues and conflicts are discussed in the Security Council.

Other Important Organs of the UN

Associated organizations deal with areas of critical interest to the world at large like food, health and education, and culture. These are: Food and Agriculture Organisation (FAO), World Health Organisation (WHO), UNESCO (UN Educational, Scientific and Cultural Organisation). There are also special organizations funded voluntarily by member countries. The two best known among them are UNICEF (United Nations Children’s Fund) which promotes child health and welfare across the world, and the UNDP (United Nations Development Programme), which focuses on development.

Activities of the UN

Over the decades, the United Nations has expanded its activities in response to the changing problems facing the world. Thus, in the 1960s, decolonization was an important issue. Human rights, the problems of refugees, climate change, gender equality are all now within the ambit of the activities of the United Nations. A special mention must be made of the UN Peacekeeping force, which has acted in many areas of conflict all over the world. The Indian army has been an important part of the peacekeeping force and has been deployed in many parts of the world.

The World Bank and the International Monetary Fund, referred to as the “Bretton Woods Twins”, were both established in 1945 after the Bretton Woods Conference in 1944. Located in Washington D.C. in the United States, they have the same membership, since a country cannot be a member of the Bank without being a member of the Fund. 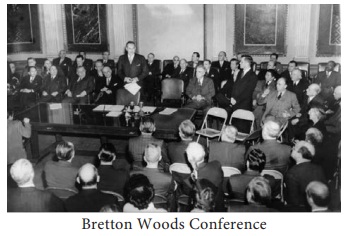 The two main organs of the World Bank are the International Bank for Reconstruction and Development (IBRD) and the International Development Agency (IDA), Together they are often referred to as the World Bank. The main responsibility of the IBRD in the initial years was to fund the reconstruction activities under the Marshall Plan in the European countries devastated by the war. The agenda later expanded to promote economic development in poorer countries and the Bank lends money to various countries for developmental projects. A further area of interest is poverty alleviation, especially in the rural areas of developing countries. The International Development Agency (IDA) also lends money to governments for developmental activities. These loans are “soft” loans, and are given at very low rates of interest for a period of 50 years. The International Finance Corporation (IFC) mainly functions with private enterprises in developing countries.

In recent years the Bank is actively promoting the achievement of the Millennium Development Goals which aim at improving living standards, removing illiteracy, empowering women and improving maternal and child health, improving the environment and eradicating AIDS.

The International Monetary Fund was primarily the brainchild of Harry Dexter White and John Maynard Keynes, the famous economist. It was formally organized in 1945 with 29 member countries. It now has a membership of 189 countries. Its primary objective is to ensure financial stability and development across the world. The main agenda is to promote international monetary cooperation, expansion of international trade and exchange stability. The Fund lends money from its resources to countries facing balance of payments problems (because they are unable to pay for their imports). It however imposes stringent conditions on the borrowing nations to tighten their budgets, practice fiscal prudence and reduce their expenditure. This is often unpopular, especially among the developing countries which may have to cut down on various programmes which provide subsidies to the people.

The objectives of the IMF are: “to foster global monetary cooperation, secure financial stability, facilitate international trade, promote high employment and sustainable economic growth and reduce poverty around the world.”