Neuroleptic Malignant Syndrome (NMS) is a potentially fatal reaction to antipsychotic medications that is characterized clini-cally by muscle rigidity, fever, autonomic instability and changes in level of consciousness.

Neuroleptic Malignant Syndrome (NMS) is a potentially fatal reaction to antipsychotic medications that is characterized clini-cally by muscle rigidity, fever, autonomic instability and changes in level of consciousness. The pathophysiological mechanism of NMS remains unclear. The hypothesis of most interest is that of reduced dopaminergic activity secondary to neuroleptic-induced dopamine blockade. This reduced dopamine activity in differ-ent parts of the brain (hypothalamus, nigrostriatal system and corticolimbic tracts) may serve to explain the various clinical features of NMS. Dopamine reduction in the hypothalamus may cause fever and autonomic instability; in the nigrostriatal system, dopamine reduction may lead to the rigidity; and the reduction in corticolimbic dopamine activity may explain the altered con-sciousness. This hypothesis is based on the fact that antipsychot-ics are dopamine-blocking agents, whereas certain dopamine agonists are reported to help resolve NMS.

The dopaminergic blocking theory does not, however, ex-plain why NMS may develop at a given time and in a given pa-tient. There are probably other genetic (possibly a predisposition similar to that seen in malignant hyperthermia), constitutional, environmental, and pharmacological factors that interact to pro-duce the syndrome. A number of investigators have proposed that other neurotransmitter abnormalities may be responsible for the syndrome, including serotonergic hyperfunction in the hypotha-lamus, excessive catecholamine secretion, and gamma-aminobu-tyric acid deficiency.

The exact frequency of NMS is unknown. A number of retrospec-tive and prospective studies have found 0.02 to 3.2% of patients treated with antipsychotics to be affected with NMS. Several factors probably account for this large variability in frequency, including differences in study methods and diagnostic criteria for NMS. A prior episode of NMS appears to predispose to future episodes of NMS. Any preexisting medical problems, especially those associated with agitation or dehydration, may increase the likelihood of NMS development when antipsychotics are used. Patients with a neurological condition as well as patients with presumed psychosis due to human immunodeficiency virus in-fection may be at higher risk for development of NMS. A number of potential risk factors related to antipsychotic treatment have been identified. Higher doses of antipsychotic, rapid increases in dosage (especially “rapid neuroleptization”) and intramuscular injections of high-potency conventional agents (e.g., haloperidol and fluphenazine) have been reported to be risk factors for NMS. NMS can occur (but rarely) in patients prescribed atypical an-tipsychotics and a review of atypical-induced NMS concluded that symptoms appear similar to NMS induced by conventional antipsychotics.

NMS is more frequently reported in men than in women and is more frequently seen in a younger population. A previous diagnosis of a mood disorder may place patients at a higher risk for NMS. Warm, humid climates may also predispose to the dis-order (American Psychiatric Association, 2000).

NMS usually presents in the first month of antipsychotic treat-ment but may develop at any time. Two-thirds of the cases mani-fest within the first week of treatment (American Psychiatri 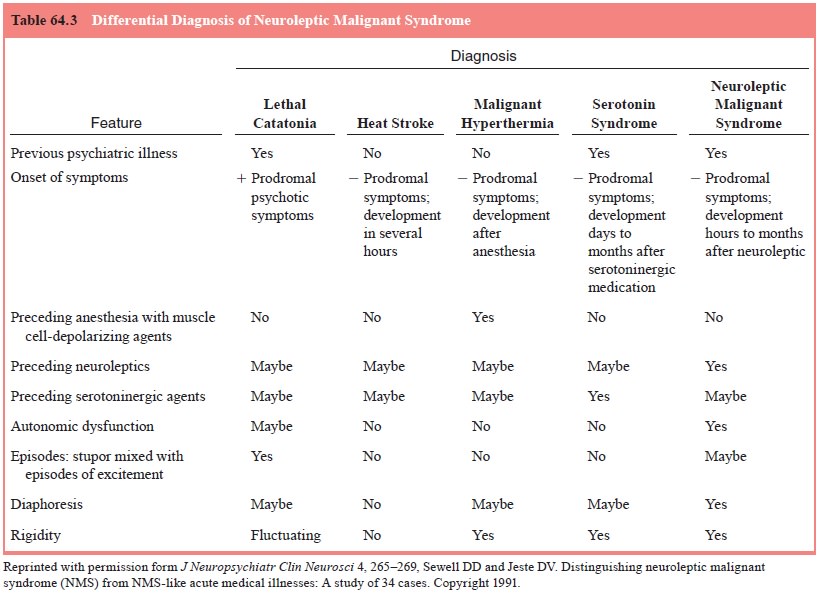 Association, 2000). The two key diagnostic features for the dis-order are severe muscle rigidity (classically referred to as lead pipe rigidity) and elevated temperature. A number of other fea-tures are also seen (see DSM-IV-TR criteria). For the psychiatrist, the most suggestive features are fluctuating consciousness (from confusion to coma), labile vital signs (tachycardia, unstable or elevated blood pressure), laboratory evidence of muscle injury (elevation of creatine kinase) and leukocytosis. Other features include diaphoresis, dysphagia, tremor, incontinence and mutism (American Psychiatric Association, 2000).

The differential diagnosis of NMS can be difficult (Table 64.3). The most important point is that the psychiatrist must start by suspecting NMS and then carefully rule out other possible organic problems. Because medical illness is a likely predisposing factor, it is important to consider that NMS may be present even if a definitive organic disease is found to explain the NMS-like symptoms.

The syndrome of lethal catatonia (seen in patients with uncontrolled manic excitement or catatonic schizophrenia) can mimic NMS (with increased temperature, autonomic irregu-larities and elevated creatine kinase), and the differential di-agnosis can be difficult. It is obviously important to determine whether the patient is indeed being treated with an antipsychotic. Although NMS may clinically look like catatonia, NMS does not typically have alternating periods of catatonic excitement and catatonic mutism. A past history of catatonic episodes is also im-portant in making the differential diagnosis. Lorazepam may be useful in alleviating the symptoms of catatonia but it has not been shown to be useful in treatment of NMS. Therefore, it is possible that a brief lorazepam trial could provide a useful and relatively easy method of distinguishing between these two conditions. The problem, of course, is that not all cases of catatonia respond to lorazepam.

Heat stroke may also look like NMS but typically differs in that it presents with hypotension, dry skin and limb flaccid-ity (American Psychiatric Association, 2000). Malignant hyper-thermia can also have a similar presentation but generally occurs within the context of a patient’s receiving halogenated anesthetic agents or succinylcholine. This condition typically begins im-mediately after administration of the anesthetic agent and only in genetically susceptible individuals (American Psychiatric Association, 2000).

Medications can cause a number of conditions that may present as syndromes similar to NMS. Allergic drug reactionsmay produce fever and autonomic instability but not rigidity. Se-rotonin syndrome, with common clinical characteristics includ-ing fever, resting tremor, rigidity, myoclonus and generalized seizures should also be considered. A medication history can usually help distinguish between the two syndromes, but patients receiving antipsychotics may also be treated with selective sero-tonin reuptake inhibitors, thus making the clinical picture more confusing. Lithium intoxication and anticholinergic delirium can both resemble NMS, as can intoxication with amphetamines, co-caine and phencyclidine as well as rapid termination of antipar-kinsonian medication.

The course of NMS is variable. Some cases may progress to fatal-ity, whereas others may follow a mild self-limited course. Once the syndrome is recognized and the antipsychotic medication is discontinued, the syndrome usually resolves between 2 weeks and 1 month (American Psychiatric Association, 2000).

Mortality rate is reported to be 4 to 25%. The most com-mon medical complications leading to morbidity and mortality are respiratory failure and renal failure. Shalev and coworkers (1989) reported that myoglobinemia and renal failure are the best predictors of mortality in NMS; the presence of either condition imparted a 50% mortality risk. In general, complications are a result of physiologic consequences of severe rigidity and immo-bilization such as deep vein thrombosis, pulmonary embolism, dehydration and an increased risk for rhabdomyolysis.

The most critical step in treatment (Table 64.4) is to recognize the clinical features of the syndrome and rapidly discontinue the an-tipsychotic. The importance of this initial step mandates that psy-chiatrists who use antipsychotics in their practice be cognizant of the early clinical features and recognize that the syndrome can occur at any time during the course of treatment. Once the an-tipsychotic has been stopped, supportive care remains the core of treatment and often must be carried out in the context of a medical intensive care unit. Each supportive intervention should be targeted to a specific symptom. Examples of interventions in-clude cooling blankets for fever, cardiac monitoring for arrhyth-mias, parenteral hydration for dehydration and monitoring for urine output and renal function. Dialysis may also be considered for acute renal failure.

It should be noted that despite their widespread use, the efficacy of the muscle relaxant dantrolene and the dopamine agonist bromocriptine has not been thoroughly established. Electroconvulsive therapy is another treatment option in NMS presumably because it increases dopamine turnover in the brain. Electroconvulsive therapy is particularly indicated when there is difficulty in distinguishing between NMS and lethal catatonia and when there seems to be a significant risk of recurrence of NMS on restarting neuroleptics. Some psychiatrists report rapid 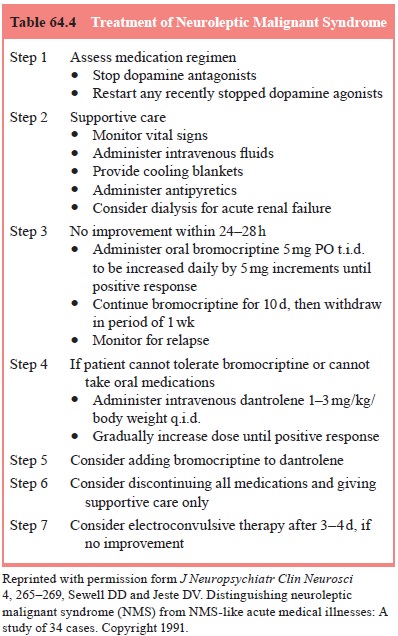 and dramatic success in the use of electroconvulsive therapy for NMS.

At present, the appropriate course is to begin with antipsy-chotic discontinuation and supportive care and to consider anti-dote therapy only if improvement in symptoms is not seen within the first few days. The treatment of NMS should be individual-ized for each patient based on clinical signs and symptoms. For example, supportive care may be sufficient in mild and early cases of NMS. Trials of bromocriptine, dantrolene, or amantadine are suggested for patients with moderate symptoms. Anticholiner-gics can be used in managing afebrile patients with neuroleptic-induced parkinsonian symptoms and benzodiazepines may be useful for agitation in NMS. ECT is recommended in situations where lethal catatonia is suspected, when NMS symptoms are treatment refractory, and in patients who remain psychotic in the immediate post-NMS period.

A particular difficulty for the psychotic patient who has NMS is that rechallenge with antipsychotics may cause NMS to recur. Successful rechallenge seems to be positively related to the length of time elapsed after resolution of NMS. There is some evidence to suggest that clozapine may have relatively little propensity to induce NMS. Clozapine, therefore, may represent one option for the patient who has experienced NMS with a con-ventional agent. It is likely but not yet known definitively that atypical antipsychotics will prove to have a lower frequency of NMS. In general, it is recommended to switch to an agent in a different chemical class and with a lower D2 affinity compared with the causal agent.