Perhaps the most uncomfortable side effects from psychotropic medications (especially antipsychotics or neuroleptics) are the acute and chronic movement disorders.

Perhaps the most uncomfortable side effects from psychotropic medications (especially antipsychotics or neuroleptics) are the acute and chronic movement disorders. Any psychiatrist in clini-cal practice has witnessed the intense distress that medication-induced movement disorders may bring to patients. Perhaps most disturbing is that unlike other medications, antipsychotics can produce “tardive” or late-occurring movement disorders that may be persistent or even irreversible. Patients in whom movement dis-orders develop may have more than subjective distress; they may suffer psychosocial embarrassment that makes them avoid being seen in public, and they may even suffer occupational impairment in severe cases. The responsibility this places on the prescribing psychiatrist is significant. Careful and reasoned thought must go into the analysis of whether the benefit of treatment with a medi-cation exceeds the risk to the patient. This includes adequately explaining and obtaining informed consent from patients.

When a psychiatrist prescribes a medication that has the potential to induce a movement disorder, the physician–patient relationship is of paramount importance. Patients who require these medications are sometimes not amenable to trusting rela-tionships (i.e., the paranoid patient). Working with a patient who has a psychotic illness requires that the psychiatrist establish a strong therapeutic bond with the patient.

Approximately 5 years after chlorpromazine was observed to be effective for psychotic disorders, orobuccal dyskinesias after pro-longed exposure to chlorpromazine were noted. This condition lasted nearly 3 months after the medication was stopped. This was in marked contrast to the parkinsonism-like EPS that had been previously described to reverse on discontinuation of antipsychotics. The term tardive dyskinesia (TD) was first used in the 1960s to de-scribe this condition. The number of reports grew rapidly in a period of years, and many of the cases were reported to be irreversible.

There are different types of movement disorders that may result from treatment with psychotropic (especially neuroleptic) medica-tions. They can generally be divided into those that occur acutely or subacutely and those that occur late in treatment (tardive). For the purpose of this discussion, we group the movement disorders into the relatively acute neuroleptic-induced disorders (acute dystonia, parkinsonism, and akathisia) neuroleptic-induced TD and neurolep-tic malignant syndrome (NMS). We also devote a section to the dis-cussion of medication-induced postural tremor that predominantly focuses on lithium-induced tremor. This covers the major diagnostic groupings contained within the Diagnostic and Statistical Manual of Mental Disorders, Fourth Edition, Text Revision (DSM-IV-TR) under the general title medication-induced movement disorders.

A time line for the emergence of the neuroleptic-induced movement disorders is provided in Table 64.1. 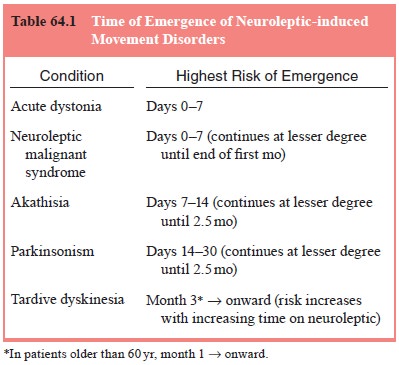 In general, the more a patient is able to understand the nature of his or her illness and the reason that a particular medication is being prescribed, the more likely he or she is to be adherent. When the psychiatrist does not devote adequate time to inform-ing and instructing the patient, the result may be poor trust, poor communication and possible legal difficulties for everyone in-volved. Unless declared incompetent by a court of law, a patient is considered to be legally competent to consent to or refuse psy-chotropic medications. The only exception to this rule is when an emergency situation exists and a patient must be medicated to prevent harm to self or others. The psychiatrist must provide information to the patient or the patient’s decision-maker about the nature and purpose of the medication, its risks and benefits, alternatives to the proposed treatment, and prognosis without treatment. Obtaining a written informed consent is one way of documenting the consent process. Another way is noting in the chart a summary of the discussion with a patient (or caregiver) about the consent to neuroleptic treatment.

Although the antipsychotics can produce unpleasant side effects, a patient who has been prepared openly and honestly for their possibility is more likely to view the side effects as evidence of the psychiatrist’s excellent fund of knowledge rather than as a terrible surprise thrust on him or her by a dishonest or ignorant physician. On a final note, it may not be assumed that a patient already receiving antipsychotics prescribed by another physician has received an adequate informed consent. The process must be-gin anew with the new treating physician. A new twist in the legal issues surrounding antipsychotic agents is the lower incidence of EPS and TD with atypical agents. The question of what is standard of care and how this relates to patients’ prescribed conventional antipsychotics who are at a higher risk of developing a movement disorder such as TD presents interesting legal issues.