After Independence, the Government of Indiaadopted planned economic development. 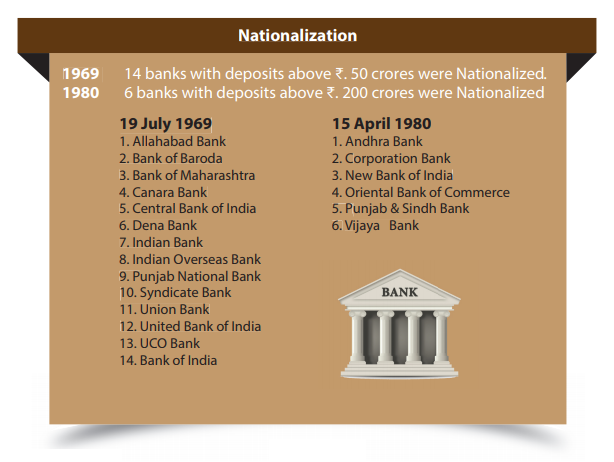 The Government of India nationalized the commercial banks to achieve the following objectives.

1.        The main objective of nationalization was to attain social welfare. Sectors such as agriculture, small and village industries were in need of funds for their expansion and further economic development.

2.        Nationalisation of banks helped to curb private monopolies in order to ensure a smooth supply of credit to socially desirable sections.

3.        In India, nearly 70% of population lived in rural areas. Therefore it was needed to encourage the banking habit among the rural population.

4.        Nationalisation of banks was required to reduce the regional imbalances where the banking facilities were not available.

5.        Before Independence, the numbers of banks were certainly inadequate. After nationalization, new bank branches were opened in both rural and urban areas.

6.        Banks created credit facilities mainly to the agriculture sector and its allied activities after nationalization.

After New Economic Policy 1991, the Indian banking industry has been facingthe new horizons of competitions, efficiency and productivity. With all these developments people in villages and slums depend largely on local money lenders for their credit need. This is unfortunate.