United Nations Development Programme has been publishing Human Development Report annually since 1990. HDI helped the government to the real uplifting of standard of living of the people.

HDI was developed by the Pakistani Economist Mahbub ul Haq and the Indian Economist Amartya Kumar Sen in 1990 and was published by the United Nations Development Programme (UNDP). It is constructed based on Life Expectancy Index, Education Index and GDP Per Capita.

HDI is based on the following three indicators

1. Longevity is measured by life expectancy at birth,

3. Standard of living, measured by real GDP per capita (PPP$).

Before calculating HDI, the fixed minimum and maximum values of each indicator are chosen.

The other nations such as Bangladesh, Bhutan, Pakistan, Kenya, Myanmar and Nepal attained the medium human development. The HDR 2016 stated that regional disparities in education, health and living standards within India has caused India’s downfall to 27 % on HDI score. India’s HDI rank value in 2015 stood at 0.624, which had increased from 0.580 in 2010. India’s rank in 2014 was 131.

Biswajeet Guha has stated that the calculation of HDI neglected many important aspects of human development. He has created four indices of HDI as HDI1, HDI2, HDI3, and HDI4. HDI1 is based on UNDP methodology as given in Human Development Report. He has enlarged the scope of HDI by adding three more dimensions such as quality of life, poverty eradication, and urbanization. 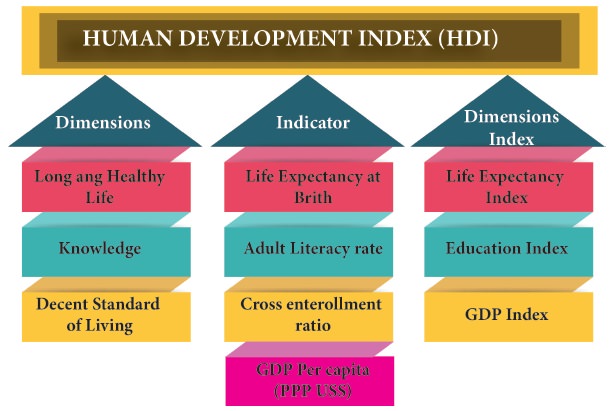 Various countries including India are continuously making efforts to improve and enlarge the scope of available statistical information.

Morris D Morris developed the Physical Quality of Life Index (PQLI). The PQLI is a measure to calculate the quality of life (well being of a country). For this, he included three indicators such as life expectancy, infant mortality rate and literacy rate. A scale of each indicator ranges from the number 1 to 100.