The term Green Revolution refers to the technological breakthrough in of agricultural practices.

Initially the new technology was tried in 1960-61 as a pilot project in seven districts. It was called as the High Yielding Varieties Programme (HYVP). 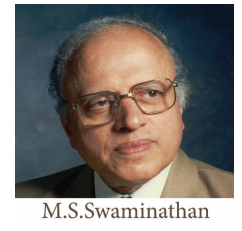 i.               The major achievement of the new strategy was to boost the production of major cereals viz., wheat and rice. India was depending on the US for the food grain. The US by using Public Law 480 (PL480) exported wheat to India. Indians were waiting for the ships to sip their food. On the other hand, India lost lots of minerals. The US could strategically exploit Indian mineral resources at cheapest price for manufacturing missiles and weapons, which gave job opportunity for larger US youth and largely contributed to US GDP. But now India is food surplus, exporting food grains to the European countries.

iii.               This Strategy was mainly directed to increase the production of commercial crops or cash crops such as sugarcane, cotton, jute, oilseeds and potatoes.

vi.               Green Revolution had brought prosperity to rural people. Increased production had generated employment opportunities for rural masses. Due to this, their standard of living had increased.

vii.               Due to multiple cropping and more use of chemical fertilizers, the demand for labour increased.

viii.               Financial resources were provided by banks and co-operative societies. These banks provided loans to farmer on easy terms.

iii.               The income gap between large, marginal and small farmers had increased. Gap between irrigated and rain fed areas had widened.

iv.               Except in Punjab, and to some extent in Haryana, farm mechanization had created widespread unemployment among agricultural labourers in the rural areas.

The Government of India had implemented ‘Second Green revolution’ to achieve higher agricultural growth. The target of Second Green Revolution was to increase 400 million tons of food grain production as against about 214 million tons in 2006-07. This is to be achieved by 2020. In agricultural sector, the growth rate of 5% to 6% has to be maintained over next 15 years. There may be changes in these statistics.

·           Introduction of Genetically Modified (GM) seeds which double the per acreage production.

·           Linking of rivers to transfer surplus water to deficient areas.