Indian Economy during the British Period

Britain had exploited India over a period of two centuries of its colonial rule.

Indian Economy during the British Period

Indian’s sea route trade to Europe started only after the arrival of Vasco da Gama in Calicut, India on May 20, 1498. The Portuguese had traded in Goa as early as 1510. In 1601 the East India Company was chartered, and the English began their first inroads into the Indian Ocean. In 1614 Sir Thomas Roe was successful in getting permission from Jahangir for setting up factories and slowly moved all parts of India.

·           During this period, India had been considered as the best hunting ground for capital by the East Indian company to develop industrial capitalism is Britain.

·           When Bengal and South India came under political shake of the East India company in 1750s and 1760s, the objective of monopoly trade was fulfilled.

·           The company administration succeeded in generating huge surpluses which were repatriated to England, and the Indian leaders linked this problem of land revenue with that of the drain.

·           Above all, the officers of the company were unscrupulous and corrupt.

·           India’s raw materials were exported to England at low price and imported finished textile commodities to India at high price. In this way, Indians were exploited.

·           The third phase was the period of finance capital starting from the closing years of the 19th century and continuing till independence. During this period, finance imperialism began to entrench itself through the managing agency firms, export – import firms, exchange banks and some export of capital.

·           Railway construction policy of the British led to unimaginable as well as uneconomic. The poor Indian taxpayers had been compelled to finance for the construction of railways. The political power was handed over to the British Government by the East India Company in 1858. 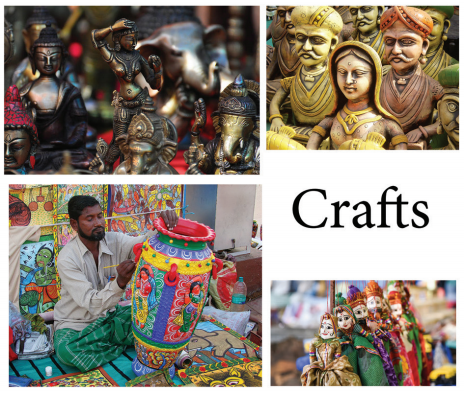 ·           With the disappearance of nawabs and kings, There was no one to protect Indian handicrafts.

·           Indian handicraft products could not compete with machine-made products.

·           The introduction of railways in India increased the domestic market for the British goods.