Which one is easy for humans and machines? and why?

·         In a distributed system, names are used to refer to a wide variety of resources such as:

·         Naming is fundamental issue in DS design as it facilitates communication and resource sharing.

o     A name in the form of URL is needed to access a specific web page.

o     Users cannot communicate within one another via a DS unless they can name one another, with email address.

·         Names are not the only useful means of identification: descriptive attributes are another.

What are Naming Services?

·         How do Naming Services facilitate communication and resource sharing?

o   An URL facilitates the localization of a resource exposed on the Web.

o   A consistent and uniform naming helps processes in a distributed system to interoperate and manage resources.

o   Users refers to each other by means of their names (i.e. email) rather than their system ids

What are Naming Services?

In a Distributed System, a Naming Service is a specific service whose aim is to provide a consistent and uniform naming of resources, thus allowing other programs or services to localize them and obtain the required metadata for interacting with them.

·        Device independent address (e.g., you can move domain name/web site from one server to another server seamlessly).

The role of names and name services

o   For many purposes, names are preferable to identifiers

o   to give identifiers and other useful attributes

o     Allow simple but meaningful names to be used

o   for some types of change, old programs should continue to work

Composed naming domains used to access a resource from a URL 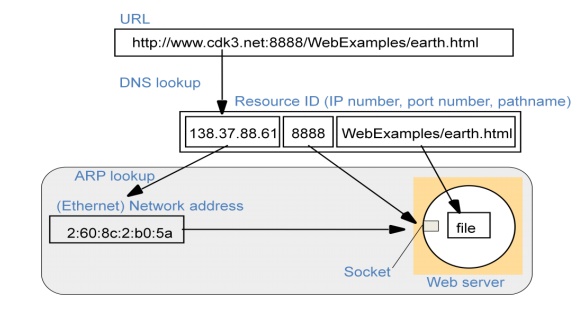 A key attribute of an entity that is usually relevant in a distributed system is its address. For example:

The DNS maps domain names to the attributes of a host computer: its IP address, the type of entry (for example, a reference to a mail server or another host) and, for example, the length of time the host’s entry will remain valid.

The X500 directory service can be used to map a person’s name onto attributes including their email address and telephone number.

A name service stores a collection of one or more naming contexts, sets of bindings between textual names and attributes for objects such as computers, services, and users.

The major operation that a name service supports is to resolve names.

Uniform Resource Identifiers (URIs) came about from the need to identify resources on the Web, and other Internet resources such as electronic mailboxes. An important goal was to identify resources in a coherent way, so that they could all be processed by common software such as browsers. URIs are ‘uniform’ in that their syntax incorporates that of indefinitely many individual types of resource identifiers (that is, URI schemes), and there are procedures for managing the global namespace of schemes. The advantage of uniformity is that it eases the process of introducing new types of identifier, as well as using existing types of identifier in new contexts, without disrupting existing usage.

Navigation is the act of chaining multiple Naming Services in order to resolve a single name to the corresponding resource.

o   internet end point of the service exposing the resource

This is because the file service may encounter a symbolic link (i.e. an alias) when resolving a name. A symbolic link must be interpreted in the client’s file system name space because it may point to a file in a directory stored at another server. The client computer must determine which server this is, because only the client knows its mount points

o     In an alternative model, name server coordinates naming resolution and returns the results to the client. It can be:

§    it is performed by the naming server

§    the server becomes like a client for the next server

§    this is necessary in case of client connectivity constraints

§    it is performed by the client or the first server

§    the server bounces back the next hop to its client

Lecture Notes: (To be attached)

The Domain Name System is a name service design whose main naming database is used across the Internet.

This original scheme was soon seen to suffer from three major shortcomings:

It did not scale to large numbers of computers.

Local organizations wished to administer their own naming systems.

A general name service was needed – not one that serves only for looking up computer addresses.

Domain names • The DNS is designed for use in multiple implementations, each of which may have its own name space. In practice, however, only one is in widespread use, and that is the one used for naming across the Internet. The Internet DNS name space is partitioned both organizationally and according to geography. The names are written with the highest-level domain on the right. The original top-level organizational domains (also called generic domains) in use across the Internet were:

edu – Universities and other educational institutions gov – US governmental agencies

New top-level domains such as biz and mobi have been added since the early 2000s. A full list of current generic domain names is available from the Internet Assigned Numbers Authority [www.iana.org I]. In addition, every country has its own domains:

o     Scales to millions of computers

o     Resilient to failure of a server

o   Look for the name in the local cache

o   Try a superior DNS server, which responds with:

Note: Name server names are in italics, and the corresponding domains are in parentheses. Arrows denote name server entries 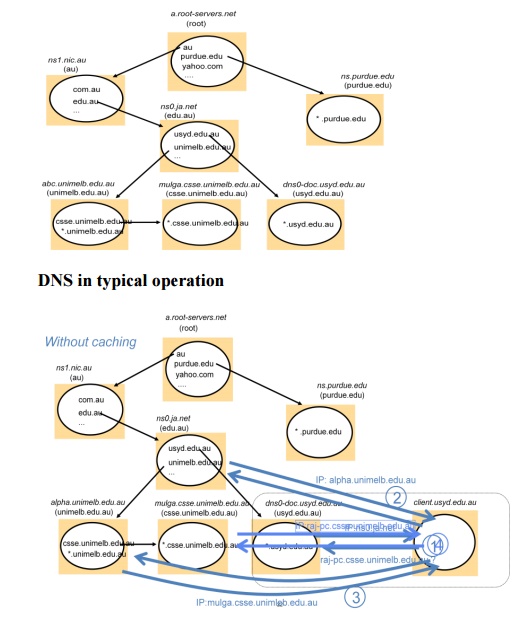 o     Main function is to resolve domain names for computers, i.e. to get their IP addresses

o   get mail host for a domain

o   Other attributes can be included (optional)

The data for a zone starts with an SOA-type record, which contains the zone parameters that specify, for example, the version number and how often secondaries should refresh their copies. This is followed by a list of records of type NS specifying the name servers for the domain and a list of records of type MX giving the domain names of mail hosts, each prefixed by a number expressing its preference. For example, part of the database for the domain dcs.qmul.ac.uk at one point is shown in the following figure where the time to live 1D means 1 day.

The majority of the remainder of the records in a lower-level zone like dcs.qmul.ac.uk will be of type A and map the domain name of a computer onto its IP address. They may contain some aliases for the well-known services, for example:

If the domain has any subdomains, there will be further records of type NS specifying their name servers, which will also have individual A entries. For example, at one point the database for qmul.ac.uk contained the following records for the name servers in its subdomain dcs.qmul.ac.uk:

o     Name tables change infrequently, but when they do, caching can result in the delivery of stale data.

o   Clients are responsible for detecting this and recovering

o     Its design makes changes to the structure of the name space difficult. For example:

o   moving subtrees to a different part of the structure (e.g. if Scotland became a separate country, its domains should all be moved to a new country-level domain.)

o  Directory service: 'yellow pages' for the resources in a network

§  Retrieves the set of names that satisfy a given description

§  (DNS holds some descriptive data, but:

·   the data is very incomplete

§  is automatically updated as the network configuration changes meets the needs of clients in spontaneous networks (Section 2.2.3)

§  discovers services required by a client (who may be mobile) within the current scope, for example, to find the most suitable printing service for image files after arriving at a hotel. 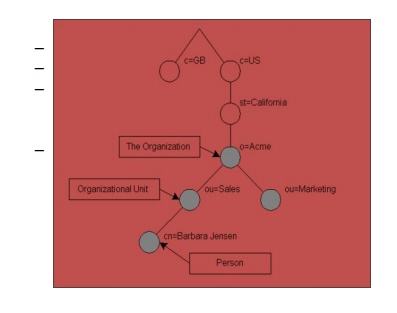 The name services store collections of <name, attribute> pairs, and how the attributes are looked up from a name. It is natural to consider the dual of this arrangement, in which attributes are used as values to be looked up. In these services, textual names can be considered to be just another attribute. Sometimes users wish to find a particular person or resource, but they do not know its name, only some of its other attributes.

For example, a user may ask: ‘What is the name of the user with telephone number 020-555 9980?’ Likewise, sometimes users require a service, but they are not concerned with what system entity supplies that service, as long as the service is conveniently accessible.

For example, a user might ask, ‘Which computers in this building are Macintoshes running the Mac OS X operating system?’ or ‘Where can I print a high-resolution colour image?’

A service that stores collections of bindings between names and attributes and that looks up entries that match attribute-based specifications is called a directory service.

Examples are Microsoft’s Active Directory Services, X.500 and its cousin LDAP, Univers and

The client may specify that only a subset of the attributes is of interest – for example, just the email addresses of matching objects. X.500 and some other directory services also allow objects to be looked up by conventional hierarchic textual names. The Universal Directory and Discovery Service (UDDI), which was presented in Section 9.4, provides both white pages and yellow pages services to provide information about organizations and the web services they offer.

Attributes are clearly more powerful than names as designators of objects: programs can be written to select objects according to precise attribute specifications where names might not be known. Another advantage of attributes is that they do not expose the structure of organizations to the outside world, as do organizationally partitioned names. However, the relative simplicity of use of textual names makes them unlikely to be replaced by attribute-based naming in many applications.

A database of services with lookup based on service description or type, location and other criteria, E.g.

Send the video from my camera to the digital TV in my room.

Automatic connection of guest's clients to the discovery service