An architecture that offers a clear separation of the main concerns in providing access to files is obtained by structuring the file service as three components: o A flat file service o A directory service o A client module.

·        An architecture that offers a clear separation of the main concerns in providing access to files is obtained by structuring the file service as three components:

·         The relevant modules and their relationship is shown in Figure 5.

·         The Client module implements exported interfaces by flat file and directory services on server side.

·        Responsibilities of various modules can be defined as follows:

§  Concerned with the implementation of operations on the contents of file. Unique File Identifiers (UFIDs) are used to refer to files in all requests for

·        flat file service operations. UFIDs are long sequences of bits chosen so that each file has a unique among all of the files in a distributed system.

·         It runs on each computer and provides integrated service (flat file and directory) as a single API to application programs. For example, in UNIX hosts, a client module emulates the full set of Unix file operations.

·        It holds information about the network locations of flat-file and directory server processes; and achieve better performance through implementation of a cache of recently used file blocks at the client.

·        Figure 6 contains a definition of the interface to a flat file service.

o     In distributed implementations, access rights checks have to be performed at the server because the server RPC interface is an otherwise unprotected point of access to files.

o     Figure 7 contains a definition of the RPC interface to a directory service. 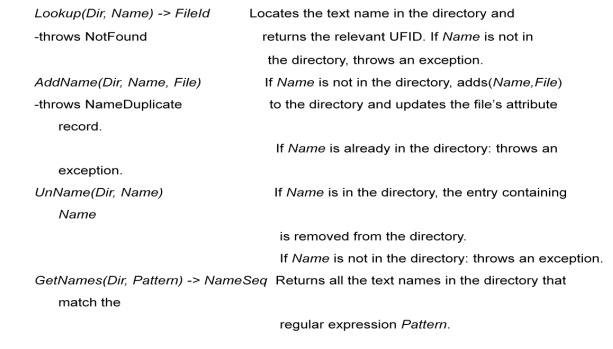 A hierarchic file system such as the one that UNIX provides consists of a number of directories arranged in a tree structure.

A file group is a collection of files that can be located on any server or moved between servers while maintaining the same names.

A similar construct is used in a UNIX file system.

It helps with distributing the load of file serving between several servers.

File groups have identifiers which are unique throughout the system (and hence for an open system, they must be globally unique).

To construct globally unique ID we use some unique attribute of the machine on which it is created. E.g: IP number, even though the file group may move subsequently.

o     It was adopted as a basis for the DCE/DFS file system in the Open Software Foundation (OSF, www.opengroup.org) DEC (Distributed Computing Environment 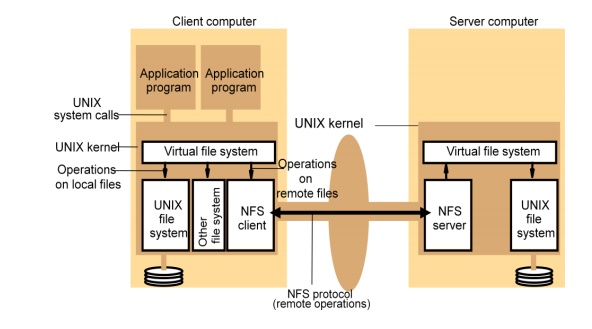 The file identifiers used in NFS are called file handles.

A simplified representation of the RPC interface provided by NFS version 3 servers is shown in Figure 9. 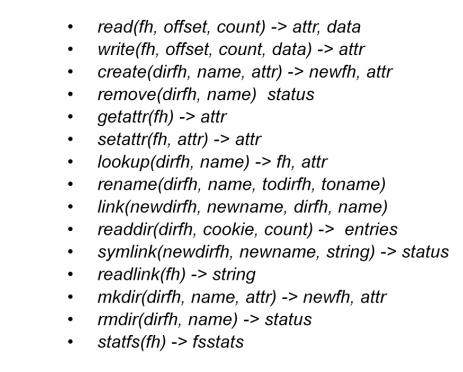 o     The NFS server is stateless server, so the user's identity and access rights must be checked by the server on each request.

§    In the local file system they are checked only on the file’s access permission attribute.

o     Every client request is accompanied by the userID and groupID

§    It is not shown in the Figure 8.9 because they are inserted by the RPC system.

o     Kerberos has been integrated with NFS to provide a stronger and more comprehensive security solution.

·         Server maintains a table of clients who have mounted filesystems at that server.

·         Each client maintains a table of mounted file systems holding:

·         Remote file systems may be hard-mounted or soft-mounted in a client computer.

o     The automounter was added to the UNIX implementation of NFS in order to mount a remote directory dynamically whenever an ‘empty’ mount point is referenced by a client.

§    Automounter has a table of mount points with a reference to one or more NFS servers listed against each.

§    it sends a probe message to each candidate server and then uses the mount service to mount the file system at the first server to respond.

·        E.g. if there are several servers with identical copies of /usr/lib then each

§  server will have a chance of being mounted at some clients.

·        pages (blocks) from disk are held in a main memory buffer cache until the space is required for newer pages. Read-ahead and delayed-write optimizations.

·        Works well in local context, where files are always accessed through the local cache, but in the remote case it doesn't offer necessary synchronization guarantees to clients.

§    Write-through - altered pages are written to disk as soon as they are received at the server. When a write() RPC returns, the NFS client knows that the page is on the disk.

§    Delayed commit - pages are held only in the cache until a commit() call is received for the relevant file. This is the default mode used by NFS v3 clients. A commit() is issued by the client whenever a file is closed.

§    synchronization of file contents (one-copy semantics) is not guaranteed when two or more clients are sharing the same file.

§    It reduces inconsistency, but doesn't eliminate it.

§    It is used for validity condition for cache entries at the client:

·         it remains difficult to write distributed applications that share files with NFS.

o     Sun RPC runs over UDP by default (can use TCP if required).

o     reads() and writes() can be of any size (negotiated between client and server).

o     File attribute information (including Tm) is piggybacked in replies to all file requests.

§    Write() operations are responsible for only 5% of server calls in typical UNIX environments.

§    hence write-through at server is acceptable.

§    Lookup() accounts for 50% of operations -due to step-by-step pathname resolution necessitated by the naming and mounting semantics.

o     NFS is an excellent example of a simple, robust, high-performance distributed service.

o     Achievement of transparencies are other goals of NFS:

·         The API is the UNIX system call interface for both local and remote files.

·         Naming of filesystems is controlled by client mount operations, but transparency can be ensured by an appropriate system configuration.

·         File systems (file groups) may be subdivided and allocated to separate servers.

o   NFS has been implemented for almost every known operating system and hardware platform and is supported by a variety of filling systems.

o   Limited but effective; service is suspended if a server fails. Recovery from failures is aided by the simple stateless design.

o   It provides a close approximation to one-copy semantics and meets the needs of the vast majority of applications.

o   But the use of file sharing via NFS for communication or close coordination between processes on different computers cannot be recommended.

o   Recent developments include the option to use a secure RPC implementation for authentication and the privacy and security of the data transmitted with read and write operations.

§    NFS protocols can be implemented for use in situations that generate very heavy loads.