AFS differs markedly from NFS in its design and implementation. The differences are primarily attributable to the identification of scalability as the most important design goal.

AFS differs markedly from NFS in its design and implementation. The differences are primarily attributable to the identification of scalability as the most important design goal. AFS is designed to perform well with larger numbers of active users than other distributed file systems. The key strategy for achieving scalability is the caching of whole files in client nodes. AFS has two unusual design characteristics:

Whole-file serving: The entire contents of directories and files are transmitted to client computers by AFS servers (in AFS-3, files larger than 64 kbytes are transferred in 64-kbyte chunks).

Whole file caching: Once a copy of a file or a chunk has been transferred to a client computer it is stored in a cache on the local disk. The cache contains several hundred of the files most recently used on that computer. The cache is permanent, surviving reboots of the client computer. Local copies of files are used to satisfy clients’ open requests in preference to remote copies whenever possible.

AFS is implemented as two software components that exist at UNIX processes called Vice and Venus.

Scenario • Here is a simple scenario illustrating the operation of AFS:

The copy is stored in the local UNIX file system in the client computer. The copy is then opened and the resulting UNIX file descriptor is returned to the client.

Subsequent read, write and other operations on the file by processes in the client computer are applied to the local copy.

When the process in the client issues a close system call, if the local copy has been updated its contents are sent back to the server. The server updates the file contents and the timestamps on the file. The copy on the client’s local disk is retained in case it is needed again by a user-level process on the same workstation.

The files available to user processes running on workstations are either local or shared.

They are stored on the workstation’s disk and are available only to local user processes.

Shared files are stored on servers, and copies of them are cached on the local disks of workstations.

The name space seen by user processes is illustrated in Figure 12. 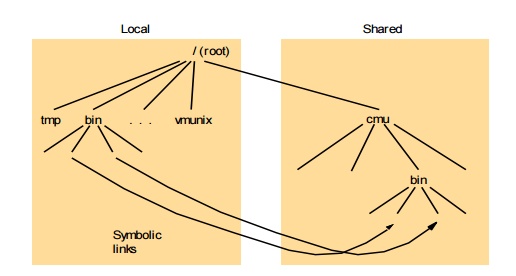 The UNIX kernel in each workstation and server is a modified version of BSD UNIX.

The modifications are designed to intercept open, close and some other file system calls when they refer to files in the shared name space and pass them to the Venus process in the client computer. (Figure 13) 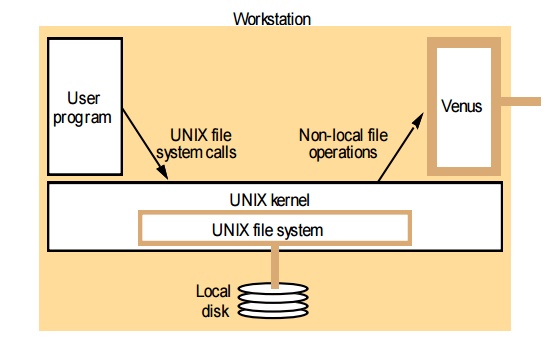 Figure 14 describes the actions taken by Vice, Venus and the UNIX kernel when a user process issues system calls. 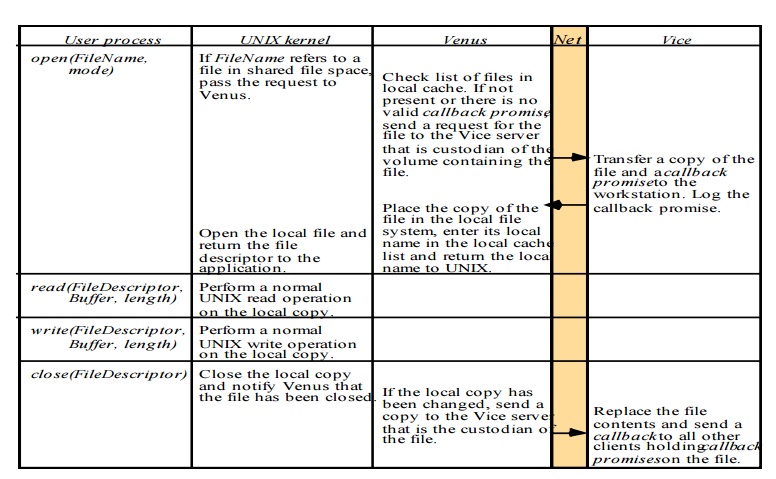 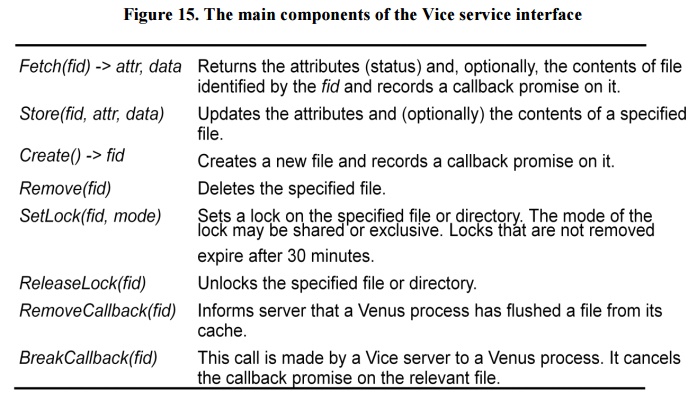 AFS introduces several other interesting design developments and refinements that we outline here, together with a summary of performance evaluation results: