The transmission from the BS in the downlink can be heard by each and every mobile user in the cell, and is referred as broadcasting.

·        Should not result in severe degradation in the performance of the system as compared to a single user scenario.

·        Approaches can be broadly grouped into two categories: narrowband and wideband.

 For voice or data communications, must assure two way communication (duplexing, it is possible to talk and listen simultaneously). Duplexing may be done using frequency or time domain techniques.

·        Forward (downlink) band provides traffic from the BS to the mobile

·        Reverse (uplink) band provides traffic from the mobile to the BS.

 Provides two distinct bands of frequencies for every user, one for downlink and one for uplink.

 A large interval between these frequency bands must be allowed so that interference is minimized.

 In TDD communications, both directions of transmission use one contiguous frequency allocation, but two separate time slots to provide both a forward and reverse link.

 Because transmission from mobile to BS and from BS to mobile alternates in time, this scheme is also known as “ping pong”.

 As a consequence of the use of the same frequency band, the communication quality in both directions is the same. This is different from FDD.

 In FDMA, each user is allocated a unique frequency band or channel.

During the period of the call, no other user can share the same frequency band. 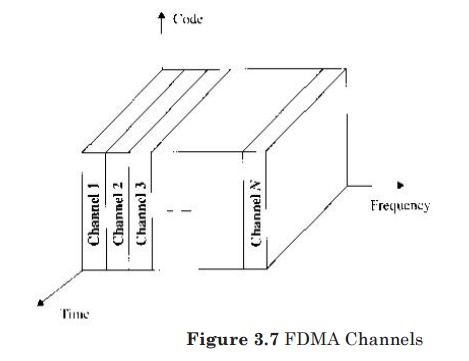  All channels in a cell are available to all the mobiles. Channel assignment is carried out on a first-come first- served basis.

 The number of channels, given a frequency spectrum BT , depends on the modulation technique (hence Bw or Bc ) and the guard bands between the channels 2Bguard .

 These guard bands allow for imperfect filters and oscillators and can be used to minimize adjacent channel interference. 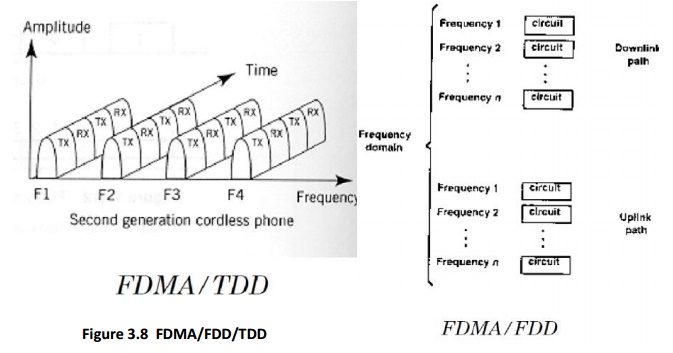  In a FDMA system, many channels share the same antenna at the BS. The power amplifiers or the power combiners, when operated at or near saturation are nonlinear.

 Undesirable harmonics present inside the band cause interference to other users in the mobile system.

 TDMA systems divide the channel time into frames. Each frame is further partitioned into time slots. In each slot only one user is allowed to either transmit or receive.

 Unlike FDMA, only digital data and digital modulation must be used.

 Each user occupies a cyclically repeating time slot, so a channel may be thought of as a particular time slot of every frame, where N time slots comprise a frame. 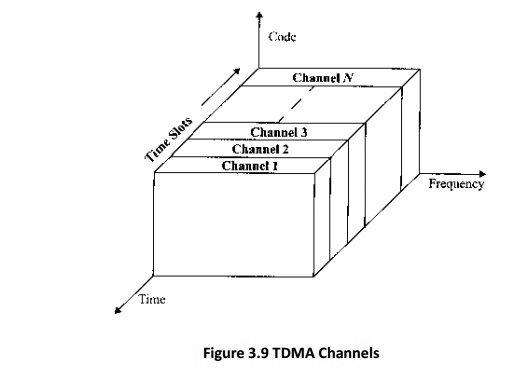  Burst transmission since channels are used on a timesharing basis.

Transmitter can be turned off during idle periods.

 Narrow or wide bandwidth – depends on factors such as modulation scheme, number of voice channels per carrier channel. 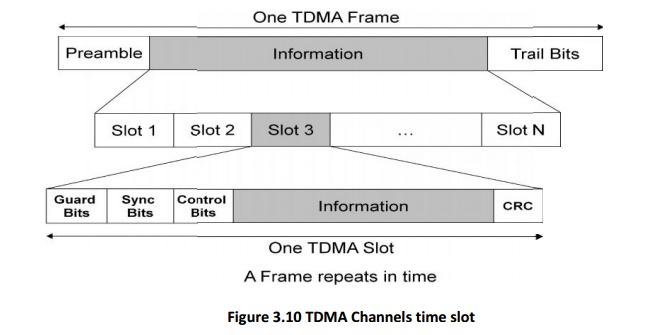  A guard time between the two time slots must be allowed in order to avoid interference, especially in the uplink direction. All mobiles should synchronize with BS to minimize interference.

 Efficient power utilization : FDMA systems require a 3- to 6-dB power back off in order to compensate for inter-modulation effects.

 Efficient handoff : TDMA systems can take advantage of the fact that the transmitter is switched off during idle time slots to improve the handoff procedure. An enhanced link control, such as that provided by mobile assisted handoff (MAHO) can be carried out by a subscriber by listening to neighboring base station during the idle slot of the TDMA frame.

Has Chip period and and hence, chip rate

PN sequence is called a codeword

Each user has its own cordword

Chip rate is oder of magnitude larger than the symbol rate.

 The sent signal is recovered by despreading process at the receiver.

Signal is spread over a larger frequency band

Other systems suffer less from the transmitter

All frequency spectrum is used

The codeword is known only between the sender and receiver. Hence other users can not decode the messages that are in transit

 Reduction of multipath affects by using a larger spectrum 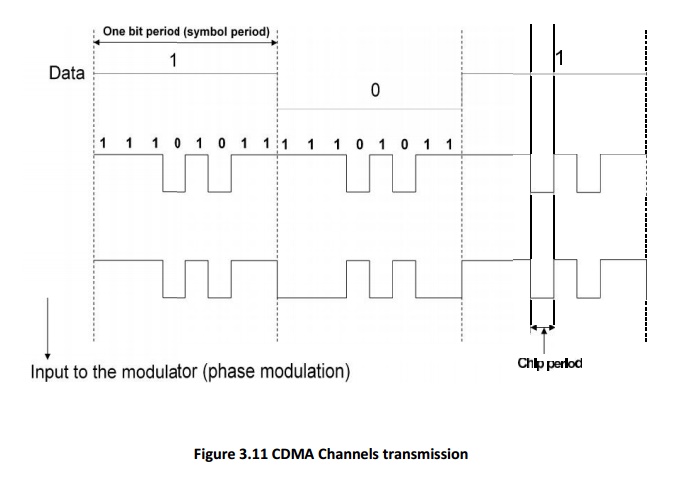 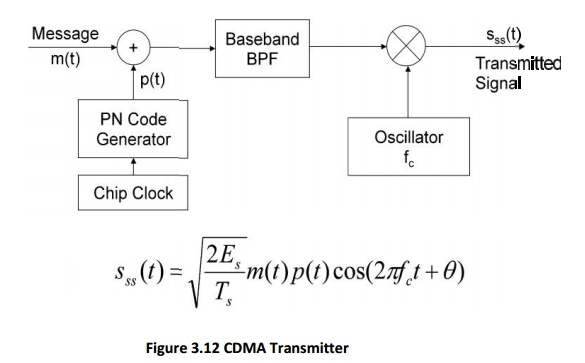 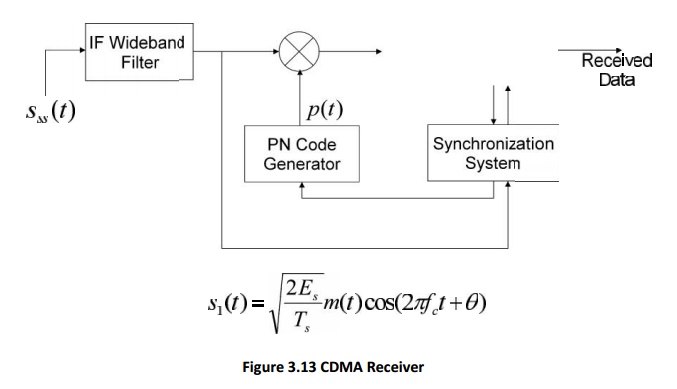 Each cell is using a different spreading code (CDMA employed between cells) that is conveyed to the mobiles in its range.

Inside each cell (inside a CDMA channel), TDMA is employed to multiplex multiple users.

At each time slot, the user is hopped to a new frequency according to a pseudo-random hopping sequence.

Bluetooth and GSM are using this technique

 A large number of independently steered high-gain beams can be formed without any resulting degradation in SNR ratio.

 Beams can be assigned to individual users, thereby assuring that all links operate with maximum gain.

 It is recognized that CDMA’s capacity gains over TDMA

 FDMA are entirely due to Its tighter, dynamic control over the use of the power domain.

 Ensure that interference will not be too great if it begins to transmit -that there is still enough space left in the power domain.

 Satellite transponders are channelized too narrowly for roadband CDMA, which is the most attractive form of CDMA.

 Power control cannot be as tight as it is in a terrestrial system because of long round-trip delay.