Multimedia encompasses a large variety of technologies and integration of multiple architectures interacting in real time. All of these multimedia capabilities must integrate with the standard user interfaces such as Microsoft Windows.

Multimedia encompasses a large variety of technologies and integration of multiple architectures interacting in real time. All of these multimedia capabilities must integrate with the standard user interfaces such as Microsoft Windows.

The following figure describes the architecture of a multimedia workstation environment. In this diagram. 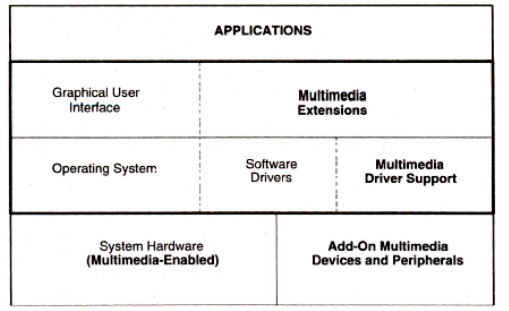 The right side shows the new architectural entities required for supporting multimedia applications.

For each special devices such as scanners, video cameras, VCRs and sound equipment-, a software device driver is need to provide the interface from an application to the device. The GUI require control extensions to support applications such as full motion video

The various graphics standards such as MCA, GGA and XGA have demonstrated the increasing demands for higher resolutions for GUls.

Combined graphics and imaging applications require functionality at three levels. They are provided by three classes of single-monitor architecture.

(i)  VGA mixing: In VGA mixing, the image acquisition memory serves as the display source memory, thereby fixing its position and size on screen:

(ii) VGA mixing with scaling: Use of scalar ICs allows sizing and positioning of images in pre-defined windows.

Resizing the window causes the things to be retrieved again.

(iii)  Dual-buffered VGA/Mixing/Scaling: Double buffer schemes maintain the original images in a decompression buffer and the resized image in a display buffer.

The Interactive Multimedia Association has a task group to define the architectural framework for multimedia to provide interoperability. The task group has C0ncentrated on the desktops and the servers. Desktop focus is to define the interchange formats. This format allows multimedia objects to be displayed on any work station. 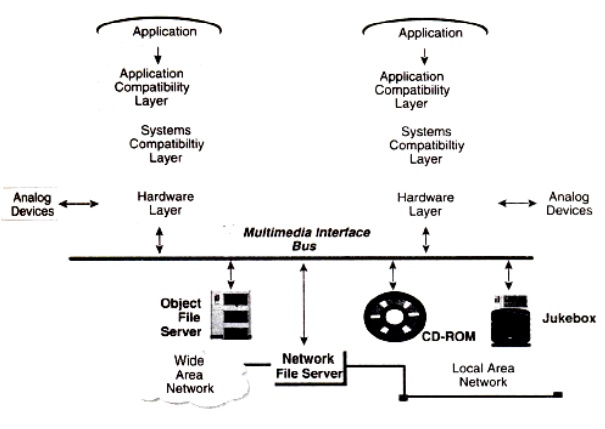 Multimedia systems need special networks. Because large volumes of images and video messages are being transmitted.

Higher classes of service require more expensive components in the' workstations as well as in the servers supporting the workstation applications.

Duplication: It is the process of duplicating an object that the user can manipulate. There is no requirement for the duplicated object to remain synchronized with the source (or master) object. Replication: Replication is defined as the process of maintaining two or more copies of the same object in a network that periodically re-synchronize to provide the user faster and more reliable access to the data Replication is a complex process.

Networking Standards: The two well-known networking standards are Ethernet and token ring. ATM and FDDI are the two technologies which we are going to discuss in detail.

ATM: ATM is a acronym for Asynchronous Transfer Mode. It's topology was originally designed for broadband applications in public networks.

ATM is a method of multiplexing and relaying (cell-switching) 53 byte cells. (48 bytes of user information and 5 bits of header information).

Cell Switching: It is a form of fast packet switching based on the use of cells. Cells: Short, fixed length packets are called cells.

ATM provides high capacity, low-latency switching fabric for data. It is independent of protocol and distances. ATM effectively manage a mix of data types, including text data, voice, images and full motion video. ATM was proposed as a means of transmitting multimedia applications over asynchronous networks.

FDDI: FDDI is an acronym of Fiber Distributed Data Interface. This FDDI network is an excellent candidate to act as the hub in a network configuration, or as a backbone that interconnects different types of LANs.

FDDI presents a potential for standardization for high speed networks.

The ANSI standard for FDDI allows large-distance networking. It can be used as high-performance backbone networks to complement and extend current LANs.