Multimedia applications use a number of technologies generated for both commercial business application as well as the video game industry.

Multimedia applications use a number of technologies generated for both commercial business application as well as the video game industry.

Let us review some of these technologies in this section.

Hypermedia documents are documents which have text, embedded or linked multimedia objects such as image, audio, hologram, or full-motion video.

Hypertext systems allow authors to link information together, create information paths through a large volume of related text in documents.

It also allows to annotate existing text, and append notes.

It allows fast and easy searching and reading of selected excerpts.

It is an extension of hypertext.

In that, we can include texts, any kind of information that can be stored in electronic storage, such as audio, animated video, graphics or full-motion video.

Hypermedia documents used for electronic mail and work flow applications provide a rich functionality for exchanging a variety of information types. The hypermedia document is a definition of a document and a set of pointers to help locate the various elements of the document on the network.

Multimedia stimulated the development of general-purpose speech interfaces. Speech synthesis and speech recognition are fundamental requirement for hyperspeech systems. Speech recognition is nothing but converting the analog speech into a computer action and into ASCII text. Speech-recognition systems cannot segment a stream of sounds without breaks into meaningful units. The user must speak in a stilted fashion. He should make sure to interpose silence between each word.

HDTV is an acronym of High-Definition Television.

The japanese broadcasting services developed a 1125-line, along MUSE system. A competing standard in the U.S. changed direction from analog to digital technology:A 1125-line digital HDTV has been developed and is being commercialized. NHK of Japan is trying to leapfrog the digital technology to develop ultra definition television (digital UDTV) featuring approximately 3000 lines 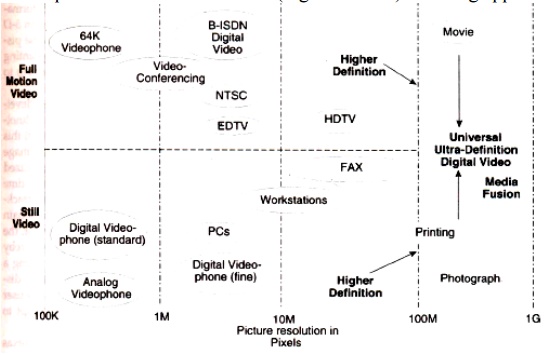 The techniques developed for holography have been adapted for direct computer use.

Fuzzy logic is logic which is used for low-level process controllers.

Use of DSP' s has evolved from traditional general purpose digital signal processors to application-specific and customizable DSPs. DSPs were conceived as math engines with a system architecture that was like that of a mini-computer with an array processor.