The first widely used application of multimedia is document image management. It is primarily intended for scanning documents and retaining their images.

The first widely used application of multimedia is document image management. It is primarily intended for scanning documents and retaining their images.

Another application is image processing. It is also known as Image recognition. It is intended for recognizing objects by analyzing their raster images. Applications that present a view of generic multimedia applications are:

The fundamental concepts of storage, compression and decompression, and display technologies used for multimedia systems were developed for document image management. Organizations such as insurance agencies law offices,country and state governments, and the federal government manage large volumes of documents.

Document image technology is adopted by Department of Defence for applications ranging from military personnel records to maintenance manuals and high-speed printing systems. Almost all document image system use workflows that are customized for the purpose for which they are being used. The workflow defines the sequence for scanning images, performing data entry based on the contents of the lmages, indexing them and storing them on optical media.

Realtime image decompression and display place an important role on image processing hardware. Image decompression and display hardware supports 4 to 8 planes. 4 planes provide 16 colors and 8 planes provide 256 colors. The image planes are also called bit planes, because, they are addressed by a bit in a bytes. Images must be processed at the rate of tens to hundreds of pixels per nano-second. For high-resolution images, processing of the order of 10 pixels/ ns is enough for monochrome still images. Gray scale images consist of pixels that have shades of gray ranging from 16 to 256. Color images feature color hues instead of shades of gray. Most high-resolution monitors support 16 to 256 colors display capability. The number of colors that can be depicted depends on the number of bits used to define the palette.

An image processing system may actually alter the contents of the image itself. Image processing systems employ the compression and decompression techniques, a wide range of algorithm for object recognition, comparing images of objects with pre-defined objects, extrapolating finer details to view edges more clearly, gray-scale balancing and gray-scale and color adjustments.

Let us briefly review the various aspects of inlage processing and recognition.

Increasing the sensitivity and contrast makes the picture darker by making bonderline pixels black or increasing the gray-scale level of pixels.

Capabilities built in the compression boards might include the following

* Image calibration: The overall image density is calibrated, and the image pixels are adjusted to a predefined level. * Real time alignment: The image is aligned in real-time for skewing caused by improper feeding of paper. * Gray-Scale normalization: The overall gray level of an image or picture is evaluated to determine if it is skewed in one direction and if it needs cOlTection. * RGB hue intensity adjustment: Too much color makes picture garish and fuzzy. Automatic hue intensity adjustment brings the hue intensity within pre-defined ranges. * Color Separation: A picture with very little color contrast can be dull and may not bring out the details. The hardware used can detect and adjust the range of color separation. * Frame averaging: The intensity level of the frame is averaged to overcome the effects of very dark or very light areas by adjusting the middle tones.

Computers-created or scanned images can be displayed sequentially at controlled display speeds to provide image animation that simulates real processes.

The basic concept of displaying successive images at short intervals to give the perception of motion is being used successfully in designing moving parts such as automobile engines.

Image annotation can be performed in one of two ways: as a text file stored along with the image or as a small image stored with the original image. The annotation is overlayed over the original image for display purposes. It requires tracking multiple image components associated with a single page, decompressing all of them, and ensuring correct spatial alignment they are overlayed.

Data entry is the most expensive component of data processing, because it requires extensive clerical staff work to enter data.

Automating data entry, both typed and handwritten, is a significant application that can provide high returns. Optical Character Recognition (OCR) technology is used for data entry by scanning typed or printed words in a form.

Initially, people used dedicated OCR scanners. Now, OCR Technology is available in software. OCR technology, used as a means of data entry, may be used for capturing entire paragraphs of text. The capturing text is almost a\ways entered as a field in a database or in an editable document

Research for Handwriting recognition was performed for CADI CAM systems for command recognition. Pen-based systems are designed to allow the user to write· commands on an electronic tablet. Handwriting recognition engines use complex algorithms designed to capture data in real time as it is being input or from an image displayed in a window, depending on the application. Two factors are important for handwriting recognition. They are the strokes or shapes being entered, and the velocity of input or the vectoring that is taking place. The strokes are parsed and processed by a shape recognizer that tries to determine the geometry and topology of the strokes. It attempts to compared it to existing shapes, such as predefined characters. The stroke is compare with the prototype character set until a match is found or all pre-defined prototypes have been checked without a match.

Multimedia system will use handwriting recognition as another means of user input.

For example, a general Image recognition system,- the Image Understanding Architecture has the design which calls for three processing layers.

(i) 512 x 512 array of custom pixel processors that extract basic features such as lines and object boundaries. (ii) The features of an object extracted by the first layer are tracked by the DSP array, and that information is fed into 5l2-M byte RAM. (iii) At the highest level, sophisticated AI algorithms perform the difficult task of object and scene recognition. .

For business applications, some core requirements are needed.

(ii)             It should be possible to attach full-motion video clips to other documents such as memos, chapter text, presentation, and so on. 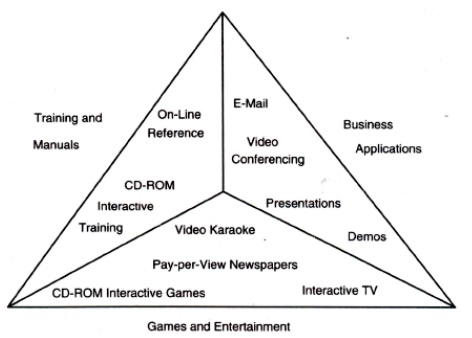 The following features should be available:

It is an application that works on universal data type. This means that the application manipulates datatypes that can be combined in a document, displayed 'on a screen, or printed, with no special manipulations that the user needs to perform. The application is truly distributed in nature.

An important consideration for such a universal application is the methodology for dissemination of the information on a network. 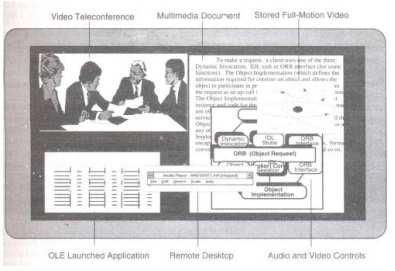 Figure describes the user screen for a universal multimedia application. In this screen, mix of windows for displaying still video and document images, a video conference window with a live session in progress, a remote live desk top, and a couple of other windows for applications such as electronic mail and desk top publishing.

To maintain all of these windows requires a substantial amount of CPU power. Digital Signal Processing assistance is needed to manage the multiple simultaneous decompressions for JPEG, MPEG and windows applications.

Two technological concepts at play in the implementation of full motion video messages:

Indexing is an important and complex subject for multimedia design. Marking a position is called Indexing. Audio and video indexing are used in full-motion video in a manner similar to any video sequence, i.e.,. just as it would in a home movie, taped performance and so on.

The needs of the application must be a strong consideration for the type of indexing provideq with the system.

*                    Depending on the application, indexing information must be maintained separately for sound and video components of a video clip.