Multi National Corporation is a Corporate organization which owns or controls production of goods or services in at least one country other than its home country.

Multi National Corporation is a Corporate organization which owns or controls production of goods or services in at least one country other than its home country.

Like, the East India Company, which came to India as a trading company and then its net throughout the country to become politically dominant, these multinationals first start their activities in extractive industries or control raw materials in the host countries during 1920s and then slowly entered. In to the manufacturing and service sectors after 1950s. Most of the MNC’s at present belong to the four major exporting countries viz., USA, UK, France, Germany. However, the largest is American. 11 of the 15 largest multinationals are Americans.

Growth of MNCs in India

A common form of MNC Participation in Indian industry is through entering into cooperation with Indian industrialist. Trends of liberalization in the 1980s gave a substantial spurt to foreign collaborations. 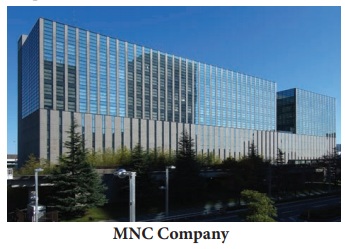 Reasons for the growth MNC

As the operations of large sized firm expand, it seeks more and more extension of its activates beyond the physical boundaries of the country in which it is in corporate.

A multinational firm enjoys a number of marketing superiorities over the national firms. It enjoys market reputation and faces less difficulty in selling its products and it adopt more effective advertising and sales promotion techniques. 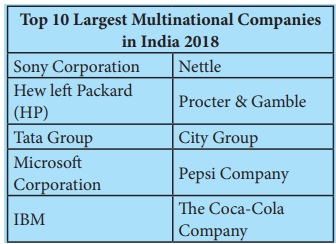 The main reason why MNCs have been encouraged by the underdeveloped countries to participate in their industrial development is on account of the technological superiorities which these firms posses as compared to national companies.

MNCs have research and development engaged in the task of developing new products and superior designs of existing products.

• A MNC is able to take advantage of tax variation.

• They are also a detrimental effect on the environment.

• The introduction of MNC in to a host country’s economy may also lead to the downfall of smaller, local business.

This Act referred directly to the operations of MNCs in India

Under FEMA the emphasis is on ‘Management’ rather than ‘regulation’