Mouth position, in terms of whether the mouth angles up, ahead, or down, also correlates with trophic ecology in many

Mouth position, in terms of whether the mouth angles up, ahead, or down, also correlates with trophic ecology in many fishes (Fig. 8.9). The vast majority of fishes, regardless of trophic habits, have terminal mouths, which means that the body terminates in a mouth that opens forward. Deviations from terminal location usually indicate habitat and feeding habit. Fishes that swim near the water’s surface and feed on items at the surface often have mouths that open upwards, termed superior or supraterminal (e.g., African butterflyfishes, freshwater hatchet or flying fishes, halfbeaks, topminnows). Some predators that lie on the bottom and feed on prey that swim overhead also have superior mouths(e.g., stone fishes, weaver fishes, stargazers). Mouths that open downward, termed sub terminalor inferior, characterize fishes that feed on algae or benthic organisms, including sturgeons, suckers, some North American minnows, suckermouth armored catfishes, Chinese algae eaters, some African minnows and cichlids, clingfishes, and loach gobies. Upside-down catfishes feed on the under surfaces of leaves, but do so while swimming upside down and not surprisingly have inferior mouths. Fishes that do not have to visually fix on their prey (e.g., algal-scraping clingfishes, catfishes, loaches, cichlids), or that take somewhat random mouthfuls of sediments that are then sifted orally (e.g. Suckers, mojarras), may gain an antipredator advantage by having an inferior mouth. A terminal mouth in such fishes would require that they angle head down each time they scraped or sampled the benthos, which would make them less able to escape rapidly if surprised by a predator. 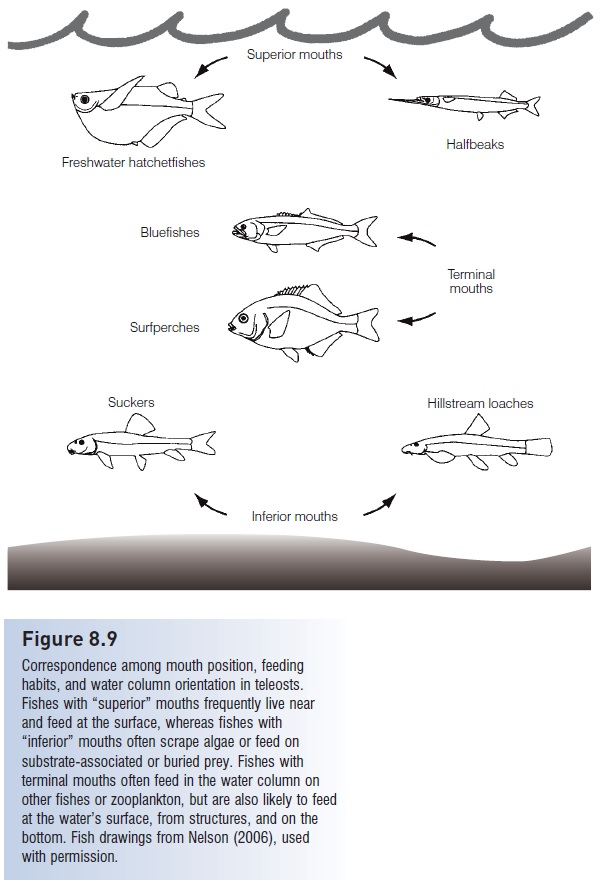 Correspondence among mouth position, feeding habits, and water column orientation in teleosts. Fishes with “superior” mouths frequently live near and feed at the surface, whereas fishes with “inferior” mouths often scrape algae or feed on substrate-associated or buried prey. Fishes with terminal mouths often feed in the water column on other fishes or zooplankton, but are also likely to feedat the water’s surface, from structures, and on the bottom. Fish drawings from Nelson (2006), used with permission.

Specialized suctorial mouths characterize unrelated fishes that scrape algae from rocks, particularly if they also live in high-energy environments. This ecological grouping includeshill stream loaches, suckermouth armored catfishes such as the familiar Plecostomus of the aquarium trade, Southeast Asian algae eaters, and the loach gobies of Australia. The gyrinocheilid algae eaters live in swift streams where they rasp algae from rocks with their lips while remaining attached with their suctorial mouth. Gyrinocheilidshave evolved an additional in-current opening dorsal to the operculum that opens into the gill chamber. They breathe in through the dorsal opening and out through the operculum. Drawing water in through the mouth in the more normal manner would require the fish to detach from the substrate, at which moment it might risk being swept downstream. Mouths are not the only way for algae feeders to remain attached in wave-swept habitats. Gobiesocidcling fishes accomplish this via pelvic fins modified into a suction disk (Wheeler 1975; Nelson 2006).