The prey a fish eats and how those prey are captured are often predictable from the type of teeth the fish possesses.

The prey a fish eats and how those prey are captured are often predictable from the type of teeth the fish possesses. Even within families, species differ considerably in their dentition types as a function of food type and foragingmode (e.g., butter Flyfishes (Motta 1988), cichlids (Fryer &Iles 1972), surgeonfishes (Jones 1968)). Here we focus on general groups of foragers and how their dentition corresponds to food type. Piscivores and feeders on other soft-bodied, mobile prey such as squid show five basic patterns of marginal (=oral or jaw) teeth:

1 Long, slender, sharp teeth usually function to hold fish(mako, sand tiger, and angel sharks, moray eels, deepsea viperfishes, lancet fishes, anglerfishes, goosefishes). Insome groups (e.g., goosefishes, anglerfishes; also esocidpikes), elongate dentition is repeated on the palatine orvomerine bones. These medial teeth point backwards and may have ligamentous connections at their base, which allows them to be depressed as the prey is moved toward the throat but prevents escape back through the anterior jaws.

3 Flat-bladed, pointed, triangular dentition is usually used for cutting off prey and is found in such fishes as requiem sharks, piranhas, barracudas, and large Spanish mackerels. Piranhas have teeth that are remarkably convergent in shape with those of many sharks (Fig. 8.7). In sharks, the lateral margins of bladelike teeth are often serrated, which enhances their cutting function when the head is shaken or the jaws are opened and closed repeatedly. Sharks and piranhas, as well as other characins, have also converged onreplacement dentition. Tooth replacement, regardless of dentition type, has evolvedrepeatedly and independently among bony fishes, occurring in brachiopterygian bichirs, amiiforms,

Convergence in dentition among predatory fishes. The triangular, razorsharpteeth of a piranha, Pygocentrus nattereri, are remarkably similar in shape and action to those of many sharks. Note the small lateral cusps at the base of the teeth, a feature also shared with many sharks. Piranhas also replace their teeth as do sharks, but piranhas alternately replace all teeth in the left or right half of a jaw, rather than replacing individual teeth or rows of teeth. The teeth in the left side of the jaw(=right side of photo) have recently erupted. From Sazima andMachado (1990), used with permission.

Often, a predator will have a mixture of dentition types, such as anterior canines followed by or intermixed withsmaller, needlelike teeth (e.g., the Pike Characin Hepsetus),or long canines intermixed with smaller conical teeth (e.g., some wrasses). Ultimately, and regardless of location in the mouth and whether teeth are of one or several types, primary dentition type reflects food characteristics. The primary biting teeth of ariid marine catfishes are palatine not marginal in location. Among 10 Australian species, piscivores have sharp, recurved palatine teeth, worm feeders have small, sharp, recurved palatine teeth, andmolluskivores have globular, truncated palatine teeth(Blaber et al. 1994). 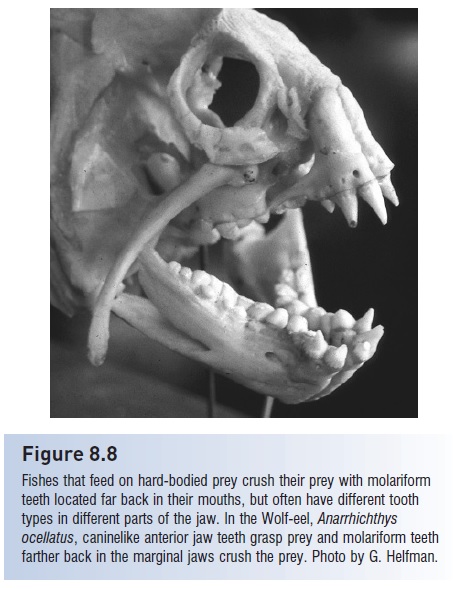 Fishes that feed on hard-bodied prey crush their prey with molariformteeth located far back in their mouths, but often have different tooth types in different parts of the jaw. In the Wolf-eel, Anarrhichthysocellatus, canine like anterior jaw teeth grasp prey and molar formteeth farther back in the marginal jaws crush the prey. Photo by G. Helfman.

Fishes that feed on hard-bodied prey, such as mollusks,crabs, and sea urchins, often have teeth and jaw characteristics that represent a separation of the activities of capturing versus processing prey. Many such fishes have strong conical dentition in the anterior part of their jaws for plucking mollusks from surfaces. The prey are then passed posteriorly to flattened or rounded, molariform teeth located posteriorly in marginal or pharyngeal jaws. Convergence is apparentwhen comparing mollusk-eating fishes from different taxa, such as horn sharks and wolf-eels. Horn sharks (Heterodontus)

A suction versus chewing arrangement occurs in many fishes that feed on sand-dwelling mollusks. Suckers such asthe river redhorse,Moxostoma carinatum, are ostariophysans in which the molar like teeth occur on the pharyngeal arches. In ostariophysans, only the lower arch develops dentition, and these teeth usually occlude against hornypads in the roof of the mouth. In higher teleost’s, the pharyngeal teeth are composed of both dorsal and ventral pharyngeal arch derivatives, such as in cichlids and the Redear or “shell cracker” Sunfish, Lepomis microlophus.Analogously, stingrays suction mollusks off the bottom and then crush them in pavement like dentition. Fishes that remove attached invertebrate prey (such as sponges, ascidians, coelenterates, and chitons) from surfaces tend to have powerful oral jaws with incisor like dentition (e.g., triggerfishes) or with teeth fused into a parrot like beak (e.g., parrotfishes, pufferfishes). In parrotfishes, the beak bites off algae or pieces of coral that are then passed to the pharyngeal mill for grinding.

Another means of dealing with both soft- and hard bodied prey has arisen in some sharks such as the hemiscylliid bamboo sharks. These sharks have the classic sharp, spiky teeth expected of a feeder on soft-bodied prey such as fish and squid. However, when feeding on harder items such as crabs, ligaments at the base of each tooth allow itto hinge backward, overlapping the replacement tooth that sits immediately behind it in the jaw. The multiple rows of depressed teeth then form a functionally flat surface more appropriate for crushing hard prey. The teeth spring backup after a bite is taken (Ramsay & Wilga 2007; see also Summers 2006).

In addition to marginal, medial, and pharyngeal teeth, fishes have one other mouth region where hard structuresaid in the capture or retention of prey. These are the gillrakers, which are bony or cartilaginous projections that point inwards and forwards from the inner face of each gill arch. As with the various teeth, gill raker morphology correspond quite closely to dietary habits. Piscivores and molluskivores, such as seabasses, black basses, and many sunfishes, tend to have short, widely spaced gill rakers that prevent the escape of large prey out the gill openings. Fishes that eat zooplankton of large and intermediate size, such as the Bluegill Sunfish and Black Crappie, have longer, thinner, and more numerous rakers. Feeders on small zooplankton, phytoplankton, and suspended matter have the longest, thinnest, and most numerous rakers; menhaden,Brevoortiaspp., filter phytoplankton, detritus, and smallzooplankters and have >150 rakers just on the lower limb of each gill arch. Among related species, gill rakersdiffer according to diet.

In North American whitefishes(Coregoninae), the Inconnu (Stenodus leucichthys) feeds on small fishes and has 19–24 rakers, the Short nose Cisco(Coregonus reighardi) feeds on mysid shrimp, amphipods, and small clams and has 30–40 rakers, whereas the Cisco(C. artedii) eats small zooplankters, midge larvae, and water mites and has 40–60 rakers (Scott & Crossman 1973). In most filter-feeding fishes, particles are captured by mechanical sieving, whereby large particles cannot pass through the narrow spaces between gill rakers. Electrostatic attraction, involving the capture of charged particles on mucous covered surfaces, is also suspected (Lauder 1985).

Correspondence among mouth position, feeding habits, and water column orientation in teleost’s. Fishes with “superior” mouths frequently live near and feed at the surface, whereas fishes with “inferior” mouths often scrape algae or feed on substrate-associated or buried prey. Fishes with terminal mouths often feed in the water column on other fishes or zooplankton, but are also likely to feedat the water’s surface, from structures, and on the bottom. Fish drawings from Nelson (2006), used with permission.